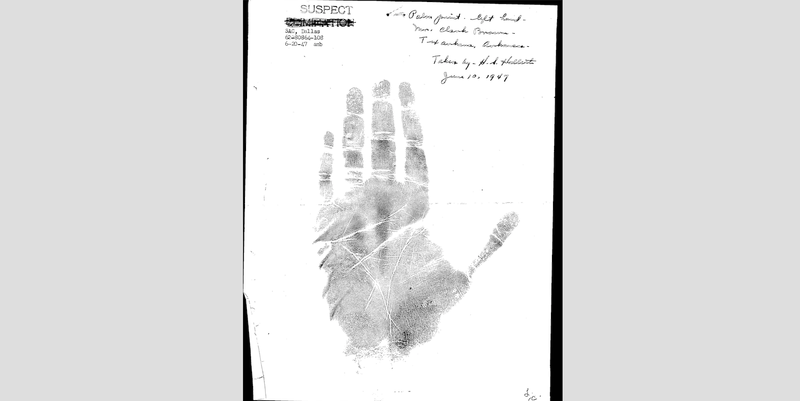 This image shows the handprint of a suspect in the 1946 Texarkana Phantom Killer serial murder case.

The FBI on Thursday published an extensive archive of documents from the investigation of Texarkana's infamous Phantom Killer murders of 1946.

Also known as the Texarkana Moonlight Murders, the killings panicked the sister cities of Texarkana, Ark., and Texarkana, Texas, in the spring and summer of 1946. In five attacks over 10 weeks, at least one person, known as the Phantom Killer, assaulted eight people, shooting five to death.

Never officially solved, the case has joined the ranks of legendary murder mysteries. "The Town That Dreaded Sundown," a 1976 movie directed by Texarkana independent filmmaker Charles B. Pierce, was loosely based on the case and became a cult hit.

[DOCUMENTS: Set 1 of FBI documents from the investigation of the Phantom Killer slayings »http://arkansasonline.com/27phantom/]

An initial glance through the archive's more than 1,100 pages reveals memoranda and reports; news clippings, including from the Gazette; correspondence among, to and from law enforcement, including FBI Director J. Edgar Hoover; photographs of evidence; fingerprints and handprints; maps and diagrams; compilations of leads; and lists of suspects dating from 1946 to 1949.

It wasn’t immediately clear how many of the documents were available to the public before they were published Thursday.

"Included here are many new FBI files that have been released to the public but never added to this website,” the site states.

James Presley of Texarkana, who authored a 2014 book on the case, said he couldn’t be certain without examining the documents but he believed they were all available before now.

[DOCUMENTS: Set 2 of FBI documents from the investigation of the Phantom Killer slayings »http://arkansasonline.com/27killer/]

"As far as I know, there wouldn't be anything new," said Presley, whose uncle W.H. "Bill" Presley investigated the case as Bowie County, Texas sheriff.

Still, he commended the FBI for making the archive easily available to the public. One of his goals in researching and writing The Phantom Killer: Unlocking the Mystery of the Texarkana Serial Murders was to collect information on the case before documents disappeared, memories faded and those involved died, he said.