Year of Harley Quinn: Birds of Prey gives Margot Robbie another crack at the character

Crazy Ex-Girlfriend: This might be the year of one Harleen Frances Quinzel, aka Harley Quinn, shown here as she appears in her adult animated web television series Harley Quinn on the DC Universe video-on-demand service. She’s also portrayed by Margot Robbie in Birds of Prey.

Birds of Prey opens today in theaters, and it marks the triumphant debut of Harley Quinn 2.0, giving Margot Robbie the chance to once again shine as the character and be in a good movie simultaneously.

The character of Harley Quinn has one of the most fascinating histories as far as comic book characters go, primarily because she didn't actually get her start in a comic book. For those unfamiliar with the history, Dr. Harleen Frances Quinzel got her start in the first season of the '90s Batman animated series.

She appeared as a sidekick and love interest for the Joker. That was in 1992. After the debut, her popularity as a character grew so much that DC actually brought her to comic books just one year later. And she's not the only DC character to hop from an animated show to the comic book world. Future Batman (Terry McGinnis) and Static Shock did the same.

Robbie is a great actress, and she was pretty much the only good thing to come out of the Academy Award-winning (for Makeup and Hairstyling) Suicide Squad in 2016. I remember thinking what a shame it was that she nailed the character and would likely never get another chance to portray her. Imagine my happiness when I saw DC was extracting the one good part of Suicide Squad and putting her in another movie.

Harley Quinn's story as an intern psychologist turned insane by the Joker is perfect for the Batman universe full of twisted characters. But it's only in the last few years that I think her best narrative has emerged as someone who finally realizes Joker is an abusive ass and leaves him.

As this story of a character leaving the shadow of Mista J picks up, she teams up with some other villains like Poison Ivy and Catwoman to become more of an anti-hero. In some stories, she's even romantically involved with Poison Ivy.

That's about where 2020 finds Harley Quinn, a woman who is done with her Puddin' and ready to make a name for herself. It's also why 2020 will be the year of Harley Quinn. She's got a fantastic animated show right now on DC Universe. I know it debuted last year, but it's still running in 2020, so I'm going to count it.

Harley Quinn ended up being a wonderful surprise and actually made me re-subscribe to DC Universe after canceling my subscription (I was disappointed in Titans). The animation looks like it picks up right where the '90s Batman left off, the writing is hilarious and the violence and mature material just add an extra layer of zaniness to this wacky cartoon.

The story follows Harley as Poison Ivy breaks her out of Arkham Asylum and works to show her she's been in an abusive relationship with Joker, a piece of steaming garbage who doesn't really care about her. When the eco-terrorist finally convinces Harley of this, she decides to put together her own crew of criminals and try to gain membership to the Legion of Doom.

Those of you who watched the old Superfriends cartoon will remember that shot of an evil dome rising out of the swamp with the narrator going, "Meanwhile, at the Legion of Doom." Yes, Harley wants to join that Legion.

I was a little concerned at first about Big Bang Theory star Kaley Cuoco voicing Harley because she really doesn't bring the familiar Brooklyn accent fans all know and love to the character. Besides that, she's played a fantastic Harley Quinn. Everything about the show is great, and I encourage Batman fans to watch at least one episode.

And then there's Birds of Prey, which I have tickets to see tonight. Just about everyone I've seen writing about this movie online has been cautiously optimistic since the first trailer dropped. It looks funny and stylish, with a powerful lead performance from Robbie.

DC has been on a roll lately with its movies, really turning things around with Aquaman. Before our Atlantean king took to the big screen, the only good DCEU movie was Wonder Woman. But now that the comic book company seems to have figured out if they'd get the hell out of the way and just let directors do their job, movies can actually turn out halfway decent, even be nominated for Academy Awards.

Aquaman? Decent. Shazam!? Hilarious. Joker? Apparently, Oscar-worthy. Now, we've got Birds of Prey teed up, and after going to see just one movie in theaters last month, I'm excited to get the ball rolling on good and entertaining cinema this year (take that, Scorsese).

Looking in from the outside as a comic book fan, Birds of Prey seems like an odd duck. For starters, Harley Quinn isn't a member of the team in the comics. And whereas this new film depicts her as the leader of the team, Batgirl/Oracle (Barbara Gordon) actually leads them in the comics.

Granted, the film has Huntress and Black Canary (who are both main members in the comics), but the rest of the cast seems like a random grab bag of powerful female characters from the Batman universe, including Detective Renee Montoya and Cassandra Cain. The later characters don't have much to do with the team in the comics.

Some die-hard comic fans are upset Batgirl isn't leading the team, but I understand from the writing perspective why they put Harley Quinn in her place. Moviegoers almost universally seemed to agree Robbie needed a second shot at her character and wanted to see her again.

Batgirl's last appearance in theaters (with 2016's The Killing Joke) was not well received. Go back to 1997 with Alicia Silverstone in Batman and Robin, and reception was even worse. I can understand why Warner Bros. would want to save the character for a later appearance (and introduce Batgirl in her own movie). Right now, in film, Batgirl remains an unknown quantity. But Warner Bros. knows fans generally loved Harley Quinn on the big screen (even if they hated her boyfriend).

Harley Quinn is associated with Gotham City Sirens in the comics, which consists of her, Catwoman and Poison Ivy. And if Warner Bros. wanted to have Harley lead a team on the silver screen, that seems like it would have been a more logical choice from a comic book perspective. But from a film perspective, the executives probably looked at Uma Thurman's performance as Poison Ivy and realized her film appearance would be even riskier than Barbara Gordon's.

Catwoman wouldn't be as risky a bet since Michelle Pfeiffer and Anne Hathaway rocked the character on screen. But she's slated to appear in 2021's The Batman played by Zoë Kravitz, so it wouldn't make much sense to have her appear in a Gotham City Sirens movie this year.

The biggest question mark of Birds of Prey's casting to me is Cassandra Cain, who has been Batgirl in the comics before. It just seems like such a random choice to pull this character into the movie, especially since I doubt she'll be suiting up as Batgirl in the film.

Still, in spite of all my questions about how the cast works, I'm excited to see the movie. I hope it does well and serves as a launching pad for Robbie to return again in the (hopefully much better) reboot The Suicide Squad coming in 2021.

And Birds of Prey leaves the overall Batman cinematic world in a good spot. We've got a new Batman queued up, a new Suicide Squad on the way and supposedly a Batgirl movie in the works. All I want now is a Nightwing movie, but we'll get to that later. For now, I'm happy to enjoy the year of Harley Quinn. 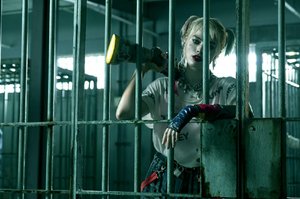 Photo by Claudette Barius
Harley Quinn (Margot Robbie), a former Arkham Asylum psychiatrist who became a crazed criminal and Joker’s accomplice and girlfriend, becomes the leader of a rowdy crew of female vigilantes in Birds of Prey. 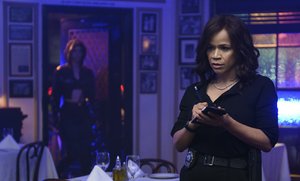 Photo by Claudette Barius
Renee Montoya (Rosie Perez) is a Gotham City police detective addicted to the dialogue and tropes of ’80s cop shows in the Cathy Yan-directed Birds of Prey.