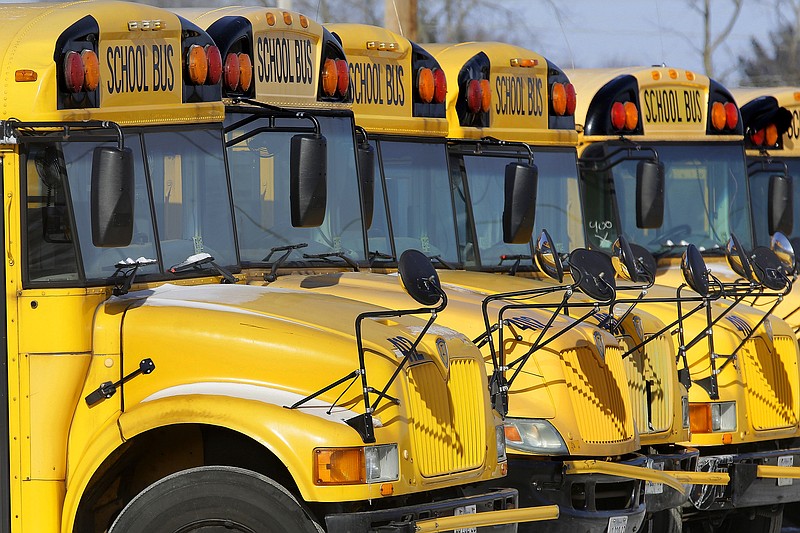 The number of Arkansas students who took Advanced Placement exams to earn college credit dipped in 2019 as did the number of exams taken.

But the number of exams receiving desired scores of 3, 4 or 5 hit a new high.

A total of 26,684 high school students took 46,247 Advanced Placement tests in 2019, with 10,111 students scoring a 3 or higher on 16,844 tests. Those tests are in some 38 subjects such as biology, chemistry, computer science, English language/composition, and world history.

The exams are produced by the College Board, the nonprofit organization that is also the maker of the SAT college-entrance exam.

A score of 3, 4 or 5 on the Advanced Placement exam grading scale of 1 to 5 typically qualifies high school students for college credit hours in a related subject area or placement in college courses that are above the freshman entry level.

The college credit hours or the accelerated course placement can result in college tuition savings to a student's family, quicker attainment of a college degree and/or available time to take more courses.

The College Board this week released its annual report on Advanced Placement exams and its other assessment products, noting that over the past decade the number of U.S. public high school graduates who have taken an Advanced Placement exam has increased by 57% while the number of students who have scored a 3 or better on at least exam has increased by 60%.

David Coleman, the College Board's chief executive officer, said there are 5,000 more high schools with Advanced Placement courses than 10 years ago and that the assessments have expanded beyond traditional multiple-choice exams to include research projects, presentations and essays as ways of gauging student preparation for college.

"The expansion of AP opportunities is a rare point of consensus in the world of education policy," Trevor Packer, head of the Advanced Placement Program at the College Board, said.

In telephone conference with reporters in which they singled out Arkansas, Packer and Coleman emphasized the need to continue to expand student access to Advanced Placement courses and exams. That includes providing the rigorous courses to students in what are often underserved rural communities as well as to students of minority groups, including black and Hispanic students.

Four Northeast states -- New Hampshire, Massachusetts, New Jersey and Maryland -- have policies in place in which at least 70% of their public high schools offer clusters of four or more Advanced Placement courses.

"There is only one other state in the nation that has also achieved this," Packer said. "The state of Arkansas is the only other state that has approached ubiquity in the number of public schools providing a range of AP classes in their public schools."

"It's because of a very deliberate policy -- Arkansas leaders felt that students, regardless of where they studied in that state, needed to have equal opportunities to take Advanced Placement courses, he said about the state's long-standing law that requires schools to offer at least four Advanced Placement courses -- at least one in each of the four core academic areas.

Arkansas also provides resources for training teachers for those rigorous Advanced Placement courses and pays the test fees for students -- conditioned on the students having taken the course associated with the exam. Each test costs about $90 and some students take several AP tests a year.

"Our Legislature has done a great job of supporting AP for our students," Stacy Smith, assistant commissioner for learning services in the Arkansas Division of Elementary and Secondary Education, said. "We have very supportive policies in our state regarding AP."

The Arkansas Advanced Initiative for Math and Science, a nonprofit organization based at the University of Arkansas at Little Rock, aids in that support by providing teacher training and student tutoring -- in the form of Saturday workshops, summer boot camps and online lessons -- for its member high schools statewide, with a focus on Advanced Placement English, mathematics and science exams.

A total of 23,395 Arkansas students took Advanced Placement exams in English, math and science in 2019, including 11,344 students in the Arkansas Advanced Initiative for Math and Science's 58-member schools.

The national numbers announced this week focus on a narrower set of data -- members of the graduating Class of 2019 rather than all Advanced Placement exam-takers.

Nationally, the number of Advanced Placement test-takers has increased over the past 10 years at the same time those who scored a 3 or higher on the exams has increased. 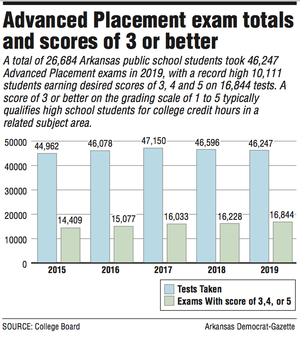