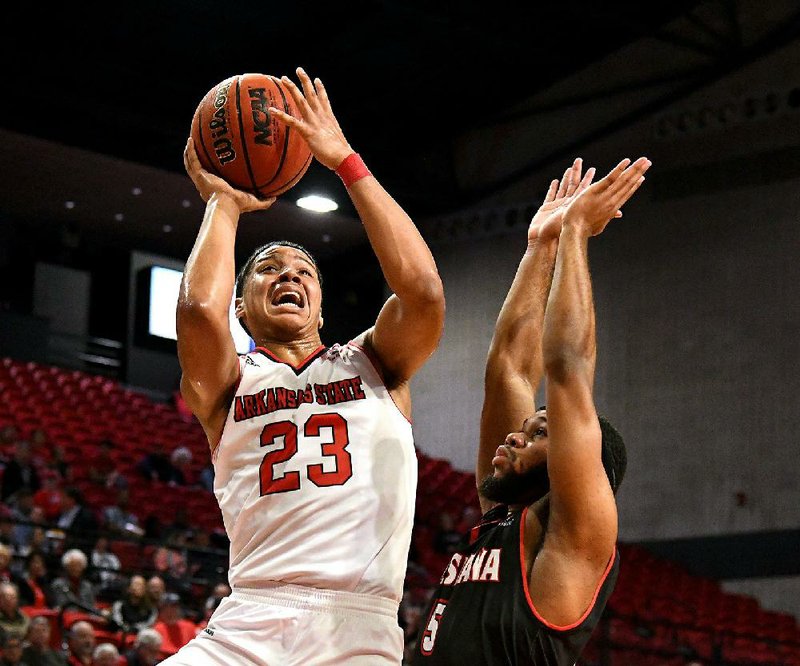 Arkansas State junior guard Marquis Eaton and the Red Wolves are 3-1 against UALR in the previous two seasons. ASU enters today’s game tied for fifth place in the Sun Belt Conference standings and will look to close ground on the first-place Trojans.

Recent history suggests meetings between the University of Arkansas at Little Rock and Arkansas State University men's basketball teams haven't been meaningful in the big picture.

The basketball has been competitive -- the past eight meetings have been decided by single digits -- but it's been awhile since both programs were relevant in the Sun Belt Conference at the same time. Jan. 14, 2017 -- when ASU beat UALR 77-72 in Little Rock -- was the last time both squads entered the in-state rivalry with winning records.

The Trojans (17-7, 11-2 Sun Belt) and Red Wolves (15-9, 7-6) meet again today in Little Rock for the first time this season, a matchup of two programs in the midst of a turnaround. Tipoff from the Jack Stephens Center is set for 2 p.m.

"I think it's good for the state of Arkansas," said ASU Coach Mike Balado, who's 3-1 against UALR in two years. "I think it's good for high school coaches and the coaches around to know that there are two good programs in the state and that we love to keep the homegrown talent here, and we're going to continue to recruit obviously Arkansas very hard."

"It's good to have two teams in the same state that are competing [against each other] for something, not just playing the game."

The UALR-ASU rivalry typically draws the biggest crowds to the Jack Stephens Center. Seven of the 10 most attended men's games in arena history have been when the Red Wolves come to town -- the record being 5,619 when UALR beat ASU 89-80 on March 1, 2016, during ex-UALR coach Chris Beard's lone season. Official capacity is listed at 5,600.

"You can definitely feel the energy," Gregory told the Arkansas Democrat-Gazette. "I'm filtering a lot more calls throughout the week than I did last year. It's been pretty nonstop."

Neither team has played since last Saturday, but UALR's grip on first place in the Sun Belt has strengthened.

With Georgia State's loss to Louisiana-Lafayette on Thursday night -- which dropped the Panthers into a three-way tie for second at 8-5 -- the Trojans hold a three-game lead in the league. ASU is lurking in a tie for fifth at 7-6.

The Trojans, who've won six games in a row for the second time this season, are turning heads.

A team that won 10 games last season and was picked to finish 11th out of 12 in the league's preseason coaches poll has grabbed control of the Sun Belt with seven games left in the regular season, and UALR is well-positioned to claim an automatic berth to the conference tournament semifinals in New Orleans on March 14-15. The Trojans' 11-2 conference start is tied for the best in school history, along with Beard's squad in 2015-16.

"This team is special," said sophomore point guard Markquis Nowell, the Sun Belt's third-leading scorer. "We all have one goal in mind, and that's to make it to March Madness."

The national attention has started to grow. Prominent college basketball insider Jeff Goodman said on Twitter this week that UALR's season is "one of the biggest shockers for me in college hoops."

ASU, which has forged a respectable turnaround of its own in the third year of Balado's tenure after back-to-back losing seasons, understandably has been overshadowed by its in-state counterpart.

The Red Wolves have dropped back-to-back games, and Balado has been irked by his club's recent defensive issues. After last Saturday's 83-77 home loss to Coastal Carolina, he declared his team's defensive performance "ridiculous" and "embarrassing."

Balado said the Red Wolves have used the time off this week to get back to the basics defensively.

ASU will be tested by UALR's versatile offense. The Trojans have scored in the 90s in each of their last two games, and they are averaging 81.2 ppg during their six-game winning streak.

"They have about eight guys playing at a high level right now. All their role guys are shooting the ball well and contributing, and they're winning," Balado said. "They're playing very, very good." 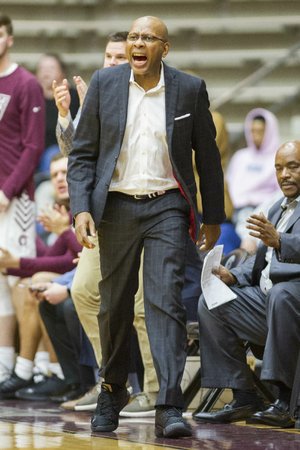 Photo by Democrat-Gazette file photo
UALR Coach Darrell Walker said he is proud of the attention the Trojans are getting with their 11-2 start in conference play. “They’ve earned that recognition and they should get it, but at the end of the day, we haven’t done anything,” he said. 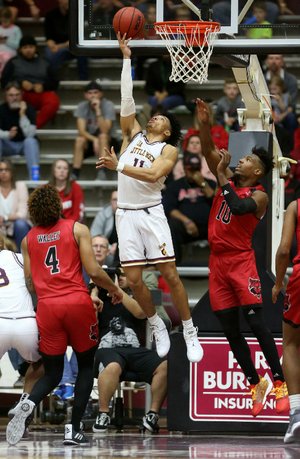 Photo by Thomas Metthe
UALR’s Jaizec Lottie (11) goes up for a layup during the Trojans’ 84-83 loss to Arkansas State last season at the Jack Stephens Center. UALR is averaging 81.2 points per game during its six-game winning streak, but the Trojans have lost three of their past four games against Arkansas State.