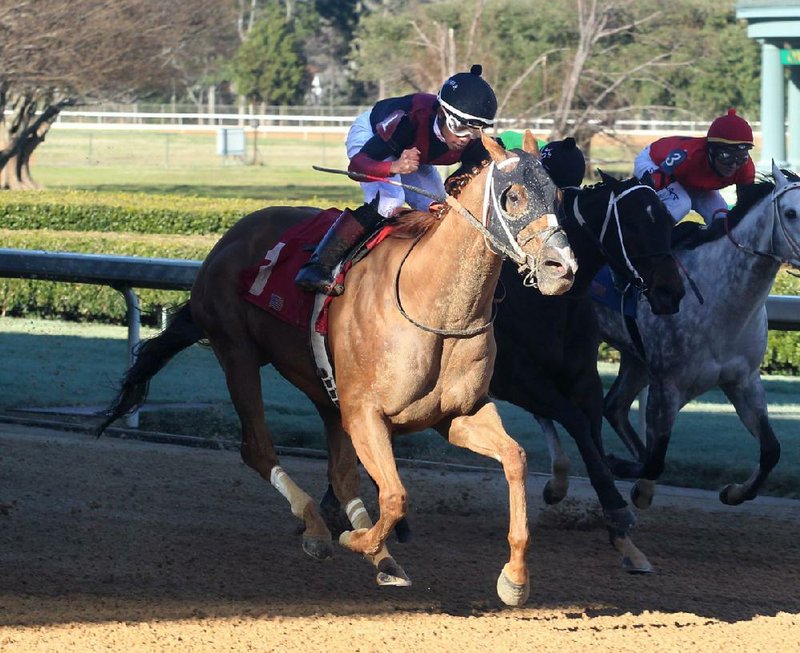 Eight are listed to start in the $125,000, 6-furlong King Cotton Stakes for horses 4 years old and up at Oaklawn Racing Casino Resort. The eighth race on a nine-race card is scheduled for 4:38 p.m.

For Whitmore, a 7-year-old son of Pleasantly Perfect trained by Ron Moquett, the King Cotton will mark his earliest Oaklawn start since 2017, which was his first full season as a sprinter when he won all three of his starts at the track, including the Count Fleet Sprint Handicap. Whitmore has an overall record at Oaklawn of 7-3-1 in 11 starts, with wins in five stakes races.

Share the Upside, by Maclean's Music and trained by Steve Asmussen, won two of three sprint starts at Oaklawn last season. He finished second by a length to Whitmore in the 6-furlong Hot Springs Stakes last year.

The Asmussen-trained Mitole won the Count Fleet last season by 23/4 lengths over second-place Whitmore. It was Whitmore's only loss in eight career sprint starts at Oaklawn. The loss dropped Whitmore's record in stakes sprints at Oaklawn to 5-1-0 in six starts. Mitole, the Eclipse Award winner as the 2019 sprint champion, was retired to stud in November.

"The only time Whitmore's been beaten in a sprint here is when he was beaten by the [sprinter] of the year," Moquett said. "He's won five of six sprint stakes here, so I think the record speaks for itself."

Wilbo, an 8-year-old son of Candy Ride trained by Chris Hartman, is the lone entrant with King Cotton experience. He won the race in 2018 and finished fifth in 2019. Last season was Wilbo's most profitable with $259,635.

"This race has sort of been on his radar the whole way," Hartman said. "He's ready to go. He just needs to step up to the plate, because it's an awfully tough race."

"We needed to run him in an allowance race and come up with a big performance before we made the next step into the King Cotton," Diodoro said. "He came back really well and has trained great and deserves a shot. After looking at the race and watching how he's going, there's no reason why he couldn't pull it off or why he doesn't deserve a shot."

Whitmore demonstrated sprint talent from the start of his career as a 2-year-old in the fall of 2015, but his connections targeted his potential around two turns and a possibility of thoroughbred fame. His first start at Oaklawn in 2016 was an optional-claiming 6-furlong win in mid-January. His next three were in Kentucky Derby qualifiers at the track -- the Southwest Stakes and Rebel Stake at 11/16 miles, and the Arkansas Derby at 11/8 miles. Whitmore finished second, second and third in those races, respectively, to make the 20-horse Kentucky Derby field.

"We chased the Derby thing," Moquett said. "He made a lot of money, he ran well, he represented himself well against Grade I horses, but we thought it might be easier on him to run shorter.

"When I look at the shedrow, I see a 7-year-old Whitmore who is healthy and happy, and we're going to have the option to run against sons of horses he competed against as a 3-year-old. That tells me we made the right decision."

Whitmore finished 19th in the 2016 Derby, 371/4 lengths behind the winner Nyquist. It was Whitmore's last attempt beyond 7 furlongs before he finished seventh of 11 in the Grade I Cigar Mile at Aqueduct in New York on Dec. 7, 2019, which was his last start before today.

"I just wanted to try him in the one-turn mile to see what he would do," Moquett said. "We tried it, but it was a very speed-favoring track. It wasn't something to our advantage the way it set up, but we tried it with the thought in mind that, no matter what, he had a good year."

Moquett flew to Florida on Friday for his son Chance Moquett's wedding today. His assistant Greta Kuntzweiler will saddle Whitmore for the King Cotton.

"We're looking for Greta to do her best Jimmy Barnes imitation," Moquett said.

Six of the eight King Cotton entrants have raced at Oaklawn. The other two -- Home Run Maker and Triangle -- enter with stakes victories last season.