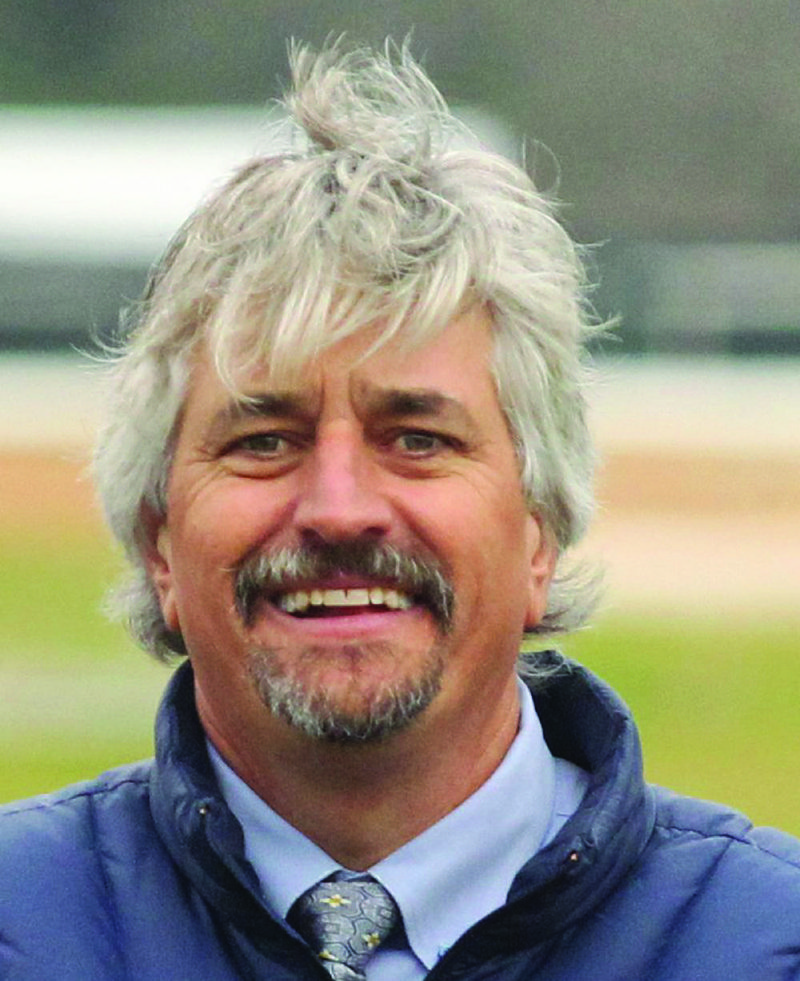 Trainer Steve Asmussen is shown after winning the Bayokoa Stakes at Oaklawn Park on Monday February 18, 2019, at Oaklawn Park. ( THE SENTINEL-RECORD / Richard Rasmussen)

Ricardo Santana won three races to take over the lead in the jockey standings with 11 victories in 56 starts.

Trainer Steve Asmussen won two races to improve his season totals to nine victories in 54 starts. Asmussen won the sixth race with La Renoleta and the King Cotton Stakes with Share the Upside.

Carson McCord, 20, a 2018 Lake Hamilton High School graduate, recorded her second victory as an owner with Futile on Friday. The horse is trained by Cecil Borel and was ridden by his brother Calvin Borel.

McCord has two victories in four starts during the meeting.

"Long term, it's not like this is what I want to do for my career," McCord said. "I think I want to be a hedge fund manager, but we'll see. Owning horses is like a hedge fund in a way. You're taking a gamble."

So far, it's paying off for McCord, who is a sophomore at Chapman University in suburban Los Angeles.

McCord said her hook to thoroughbred racing was through her father, Bill McCord, who bred and owned horses before going into the stock business in the 1990s. Trainer Cecil Borel also had a business relationship with her father in the 1980s.

Calvin Borel came out of retirement at the 2019 Oaklawn meeting and recorded his first victory in more than 4 ½ years with K J's Nobility in an Arkansas-bred starter-allowance sprint in April. K J's Nobility nearly gave McCord her first career stakes victory less than a month later, finishing second and beaten by a half-length by Hoonani Road in Oaklawn's inaugural $200,000 Arkansas Breeders' Championship at 1 1/16 miles.

"I think I owned my first horse a month after I turned 18," Carson McCord said. "I think we bought a yearling then, and then I claimed K J."

"It was close, but I think if Cecil would have had him longer, we would have won," McCord said.

Futile also represented McCord's first victory of the meeting in a Jan. 25 sprint for older $20,000 claimers. Calvin Borel was named to ride Futile but was taken off the gelding and was replaced by Fair Grounds-based Miguel Mena, who had ridden Lynn's Map the previous day in the $150,000 Smarty Jones Stakes.

It was really a win-win for McCord since her boyfriend, Joe Santos, is Mena's agent.

Information for this report was contributed by Oaklawn media department