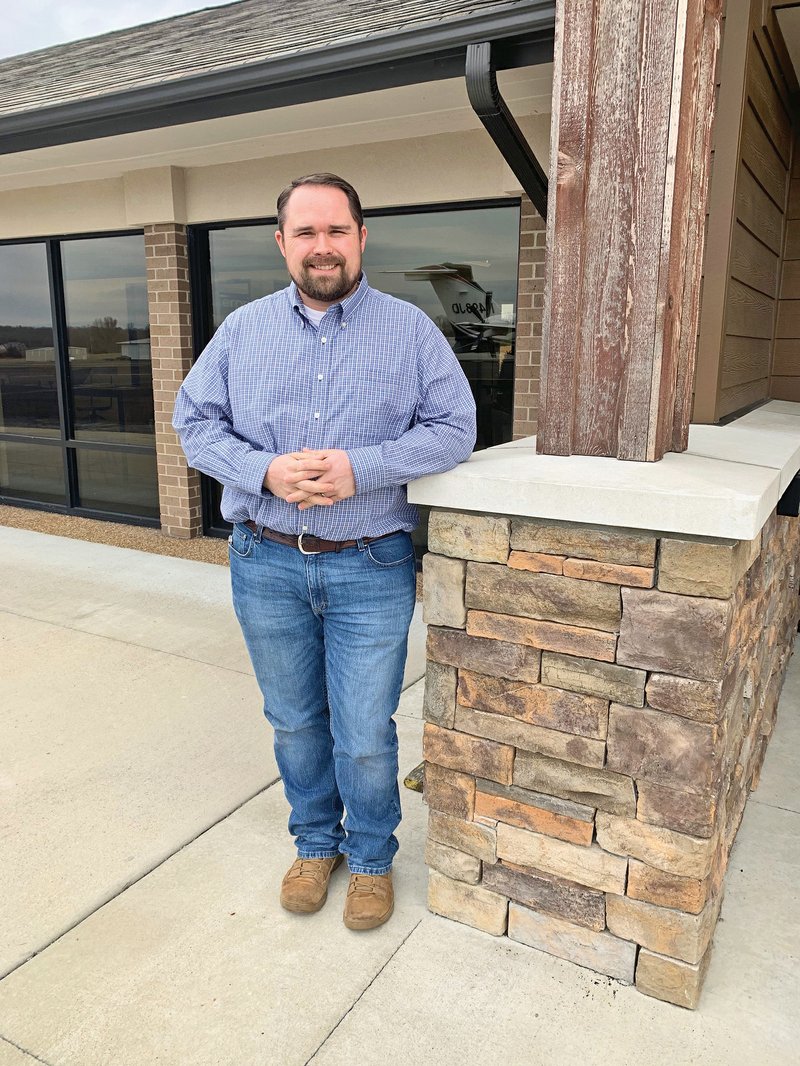 Justin Thompson stands outside the terminal building at the Batesville Regional Airport, where he has recently been appointed the manager. He replaces Darren Wilkes, who is retiring.

Perhaps it was coincidence, or perhaps it was dumb luck that led Justin Thompson to his next job upon retiring from the Air Force, but the 38-year-old Batesville native said he believes it was something more.

Upon his retirement with 20 years in the Air Force, Thompson was looking for something else to do, and he knew he wanted his family to live where he grew up. So after a four-day weekend spent in Batesville, he found his opportunity just a little bit south of the city limits.

“We came home for Presidents Day weekend last year, and on the way out of town, something was saying, ‘Pull in the airport, pull in the airport.’ I’m a man of faith — I felt God was tugging at me,” he said.

He turned at the stoplight to go to the back side of the Batesville Regional Airport in hopes of seeing a maintenance shop or something where he could find a job. After not finding what he was looking for, he turned back onto the highway. “Something was still saying, ‘Pull in.’”

So he did, and he spotted Darren Wilkes, the airport manager, coming through the gate on the property. The two began talking, and Thompson asked about maintenance shops or any other aviation-related jobs.

Thompson said they talked some more, and when he got home, he began researching who was on the Batesville Regional Airport Commission. One member was Charles Barnett, whose mother-in-law had employed Thompson’s grandfather, Marion Thompson, at Mack Farm Dairy.

Thompson found his calling while still in high school.

In 11th grade, he said, he was assigned a report on careers, and he did a comparison of the Army and the Air Force. One of his uncles had served in the Army, while another uncle and a great-uncle had gone into the Air Force.

That became a joke — two white sheets, Thompson said, but he could see he would “have it better” in the Air Force.

After graduating from Batesville High School in 1999, Thompson joined the Air Force, and he said it was always his plan to serve 20 years, retire and return to his hometown.

After basic training at Lackland Air Force Base in San Antonio, Texas, he was assigned to Pensacola, Florida, for more training. In April 2000, he landed at Whiteman AFB in Missouri.

Thompson worked on B-2 stealth bombers, which he said have layers of coatings that make radar waves “go through it and out the back.”

“If there was a cracked pane or missing pane, it would ding and come back [to the radar], so everything had to be perfection to the thousandths, completely smooth,” he said.

When he went to tech school, he was assigned to work with sheet metal that would be on the planes, as well as build replacement parts.

“When I got my assignment to Whiteman, the B-2 was a new program, so there were a lot more advanced composites of things that are more common now, like carbon fiber,” he said.

His first deployment was only 45 days on the island of Diego Garcia in the Indian Ocean, but his next assignment brought him closer to home, to Little Rock.

He also did a four-month stint in Kuwait, which he said was his first Christmas away from home.

“But I was still single — I don’t know how people do it with kids. I don’t know how they manage, especially like for 18 months with maybe a two-week break at the six-month point. My hat’s off to them,” he said.

His single status didn’t last, especially since “My grandmother and aunt were playing matchmaker with me,” he said.

It was while he was stationed in Little Rock that he met his future wife, Mary.

Thompson acknowledged that it was embarrassing at the time, but his grandmother and aunt had found someone they wanted him to meet and kept insisting, “You really need to go meet this girl. She’s wonderful — she comes from a good Christian family,” and so on.

Thompson had come in for Thanksgiving, and the morning he was going to head back to Little Rock, his grandmother came in and announced, “Justin, I’m going to iron your shirt, and I want you to go down to Ollie’s [in the Cottage Shops near Kroger].”

Knowing his grandmother wasn’t going to take no for an answer, he finally said, “OK, I’ll go — but don’t iron my shirt.”

He packed up, and on the way through town, he stopped in at Ollie’s.

“So here I am going out of town in my single-cab Z71 truck with a four-wheeler in back, full single-guy mode, and I pulled into Ollie’s parking lot, and I walked in.”

He spotted Mary working and told her he was looking for a Christmas present for his mom — which was partially true, he said — and she asked who his mom was.

“When I said, ‘Kim Thompson,’ she kinda turned red and said, ‘I’ll be right back’ and went to the bathroom,” he said, chuckling.

What he didn’t know was that Mary had called his mom about a job at her workplace, and while their initial conversation was about work, Thompson’s mom was able to work in the fact that she had a son who was single and in the Air Force.

“They were really trying to set me up,” Thompson said, laughing.

Thompson and Mary exchanged phone numbers, and their first date was at the Batesville Christmas parade — something her family attends every first week of December.

The two were married in January 2009, and the following year, Thompson went to Afghanistan for another four months and worked on A-10s, drones and Blackhawk helicopters.

After that deployment, he received orders back to Missouri to work on the B-2s again, and while the Thompsons were there, their daughter, Bonnie Sue, was born in 2013, followed by their son, Tucker Timothy, in 2019.

Thompson’s last assignment was a staff position at Air Force Global Strike Command. As he got closer to “punching the button,” or retiring, he learned about a transition program that places military personnel in internships or apprenticeships.

Thompson said he started looking for a job in his civilian life, but it was important to him to find a good fit. He could have gone to California and continued to work on aircraft and made a lot of money, but he wanted to move back home.

“We’d rather be here with family and have the kids back here,” he said.

He started an internship at the airport on Sept. 1, and on Jan. 1, he officially took over manager duties there.

Thompson said his mother-in-law, Roetta Tucker, had spotted a help-wanted ad for a manager nine years ago, but Thompson didn’t apply at that time. He said he still wanted to finish out his time in the Air Force and thought whoever took the job would probably stay 20 years or more, and he would need something before that person retired.

As it turned out, Wilkes got the job, and Thompson said the timing worked out perfectly for them both.