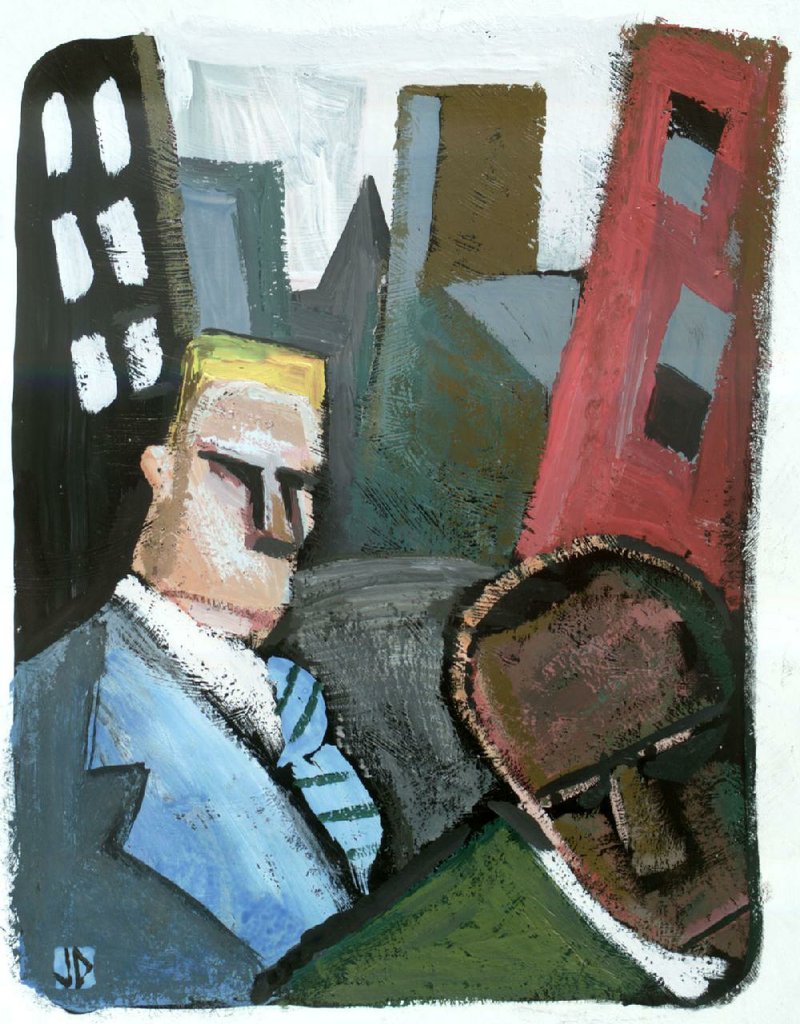 We're having lunch at Pancho's on Broadway in West Memphis, and state Sen. Keith Ingram is regaling us with stories about the restaurant's long colorful history.

Ingram, 64, can tell a lot of stories about this sometimes raffish city. His father, Bill Ingram, served in the Arkansas Senate from 1963-81 and developed close relationships with most of the state's leading political figures.

Keith Ingram's brother, Kent, later served nine years in the Senate. Keith Ingram, who was West Memphis' mayor from 1987-95, served in the Arkansas House of Representatives from 2009-13 and has been in the Senate since January 2013. He briefly considered running for governor in 2014.

"I can remember when they had a wagon on the roof here," Ingram says of the restaurant. "A couple of buddies had a few too many one night. They climbed up on the roof and pretended to be driving the wagon. The folks driving by on Broadway didn't know what to think."

Pancho's opened in 1956 when Broadway (which is also U.S. 70) was the main road from Little Rock to Memphis. The restaurant was open 24 hours a day in its early years. The idea of Pancho's was hatched when Morris Berger took his son, Louis Jack Berger, to Mexico as a high school graduation gift. They decided that a Mexican restaurant (rare in those days in the Memphis area) would do well.

The original Pancho's had packed dirt floors and a live tree in the center that was salvaged during construction. A large truck later ran into the building and destroyed much of the business. The family built Pancho's at its current location on land they had owned since having bought the Plantation Inn.

The Plantation Inn had thrived in the years when West Memphis was a wide-open town whose clubs drew thousands of people each night from Memphis. A huge neon sign read "Having Fun With Morris. Dancing Nightly." Above those words, the sign featured a couple dancing.

Morris Berger looked the part of a nightclub owner with his slicked-back hair and pencil-thin mustache. The location once had been the site of an actual plantation house that turned into a gambling hall. Berger opened the Plantation Inn there in 1942.

"Throughout the 1940s and 1950s, West Memphis provided a lax legal environment that spawned a variety of musical venues like the Cotton Club and Danny's," Bob Mehr wrote for The Commercial Appeal at Memphis.

"While those clubs catered mostly to country music, the Plantation Inn opened its stages to a host of great black acts from the Newborn family--father Phineas and sons Calvin and Phineas Jr.--to bandleaders

such as Ben Branch, Gene 'Bowlegs' Miller and Willie Mitchell. Although it survived an early 1960s crackdown on local clubs, the Plantation Inn closed its doors in 1964, but not before playing a key role in shaping Memphis music. Long before his trumpet would anchor the Memphis Horns and punctuate inimitable hits for the Stax label, the West Memphis-raised Wayne Jackson got his education in R&B at the Plantation Inn."

Jackson said: "When I was a kid, I always heard about the Plantation Inn. It was one of those places the adults went. They had linen tablecloths, good steaks and good music. Then, as time went by and we became teenagers, we would go and sit around and listen to the bands."

Music producer Jim Dickinson told Mehr: "There were times when I couldn't get in, like if I didn't have a phony ID or something. So many a night, I just went over there and got drunk in the parking lot. I stayed in my car listening to the music because you could hear it from outside."

Robert Gordon devoted an entire chapter to the Plantation Inn in his 1995 book It Came From Memphis.

"Kids could get into clubs more easily across the river, and the exposure to bands like Willie Mitchell's or Phineas Newborn's group or the many others who came and went was crucial," Gordon said. "It provided those kids with a kind of primer for R&B--the rhythms, the repertoires and the unusual horn arrangements. Of course, some of those same bands also played Memphis clubs. It was just much harder to get in to see them.

"Steve Cropper and Duck Dunn of Booker T. & the MGs tell a story about going to the Flamingo Club on Beale Street and standing in the stairwell listening to the music. Because they were kids and were white, they couldn't get in beyond that. But in West Memphis, you could practically get on the stage."

Much of what people now think of as Memphis music got its start on the Arkansas side of the river.

"A lot of people say the origins of the Memphis sound began at the Plantation Inn, and I think there's a lot of truth to that," Jackson said. "We did get ideas from those bands. We dressed up and shined our shoes and did steps."

The Plantation Inn's main bandleader was Branch. His group was called The Largos.

"They were the single most significant influence on what became the Memphis sound," Dickinson said. "All of what became soul music was derivative of what Ben Branch and The Largos were doing. ... It was sort of what continued happening in the recording studios in Memphis later on--how the same group of musicians developed a kind of interplay and a style."

Business and civic leaders in West Memphis are now hoping there will be an increased focus on the city's contributions to American music. That effort likely will be fueled by the massive expansion that has begun at what's now Southland Casino Racing.

The expansion will cost a minimum of $250 million and will feature a 20-story hotel that will tower over the Arkansas Delta. The start of construction has led to an economic boom being felt across town; a boom that promises to transform the city.

The 300-room hotel will connect to a 113,000-square-foot casino complex. There will be 216 standard rooms, 72 corner suites and 12 penthouse suites. New York-based Soho Architecture, which has done extensive work at Atlantic City casinos, designed the project. If there aren't construction delays, the hotel should be open by February 2021.

A number of those who come to Memphis as tourists will now stay on the Arkansas side of the Mississippi River. Southland's owner, Delaware North, is a large hospitality conglomerate headquartered in Buffalo, N.Y. It has more than $3 billion in annual revenues and employs more than 55,000 people.

"Delaware North is big enough to do pretty much whatever it wants to do," said one person who asked to remain anonymous since the company has yet to publicly release all of its future plans. "Our understanding is that they want to make Southland the flagship attraction for the whole company. They're confident enough that the 20-story hotel will stay full that they're already thinking about a second tower."

Southland's plans have spurred a rash of construction along Interstate 40 in West Memphis. A La Quinta Inn & Suites by Wyndham opened last year. The hotel cost $6 million. At least $5 million is being spent to transform what had been the Clarion Inn (and before that a Holiday Inn) into a 130-room Radisson Hotel. Another $3.8 million was spent to give West Memphis a hip Tru by Hilton that has 81 rooms.

The hope now is that West Memphis' higher profile will lead to live music venues and restaurants a few blocks away on historic Broadway, which serves as the city's Main Street. A feasibility study is planned to see if the city can support a cinema complex, water park and entertainment district.

On Jan. 25, the Arkansas Racing Commission voted unanimously to authorize Southland to begin offering sports betting. Betting began three days later. What was Sammy Hagar's Red Rocker Bar & Grill is now Sportsbook Bar & Grill. Delaware North announced in October that it will eliminate greyhound racing during the next three years. The track will begin reducing the number of races this year and run the last races on Dec. 31, 2022.

Southland is one of just 18 dog tracks still in operation across the country. Florida voters decided in 2018 to end greyhound racing in that state by 2021. The sport, which now exists in only six states, is expected to become extinct in the U.S.

Robert Thorne, president of the Arkansas Greyhound Kennel Association, said at the time of the October announcement: "We wanted to avoid a disruptive and abrupt end to live racing to the benefit of all parties, including everyone who has a job at stake."

Delaware North officials know that the future is in casino gambling, sports wagering and the amenities that come with a resort--restaurants, clubs, spas, etc.

"The city will get a lot more taxes that they can utilize to grow West Memphis," David Wolf, Southland's president and general manager, told the Memphis Business Journal. "We feel that our partnership with the city and its leadership will bring a bright future to Crittenden County. The mayor [Marco McClendon] is out there aggressively recruiting new businesses and opportunities and can look at Southland's growth to entice these businesses to come to West Memphis. As Southland thrives, so will the city of West Memphis and Crittenden County."

Greyhound racing began in Crittenden County in 1935. Southland has been at the same location since 1956. The dogs had first raced at Riverside Kennel Club, which was at the Arkansas end of the bridge crossing the Mississippi River. When Southland was established, it was the only legal gambling venue in the Mid-South. It drew people from Arkansas, Tennessee, Mississippi, Missouri, western Kentucky and southern Illinois. Delaware North bought the track in the 1970s.

"At its high point, Southland was said to be the top dog track in the country," Nancy Hendricks writes for the Central Arkansas Library System's Encyclopedia of Arkansas. "Through the 1960s, 1970s and into the 1980s, a typical Saturday night at Southland might see the parking lots full with 20,000 people in attendance. Annual wagers on the greyhound races at the time generally exceeded $200 million, and more than 600 people were employed. All that changed in 1992."

That's when casino gambling came to nearby Tunica County in Mississippi.

"Southland fell on hard times with daily attendance ebbing to about 500," Hendricks writes. "Its annual revenues dropped from $200 million in the 1980s to less than $35 million in the 1990s. More than half of its employees lost their jobs."

Southland was on the verge of closing when the Arkansas Legislature voted in 2005 to allow what it called "games of skill" at Southland and at Oaklawn Park in Hot Springs. Thanks to those electronic games, a $40 million facility was being built at the dog track by late 2006. It included a 55,000-square-foot gaming room, a 400-seat event center and additional restaurants.

In November 2018, Arkansas voters approved a constitutional amendment to allow four full-fledged casinos across the state. One of those casinos was at Southland. Now, it's Tunica that has fallen on hard times.

Meanwhile, the boom is on in West Memphis.