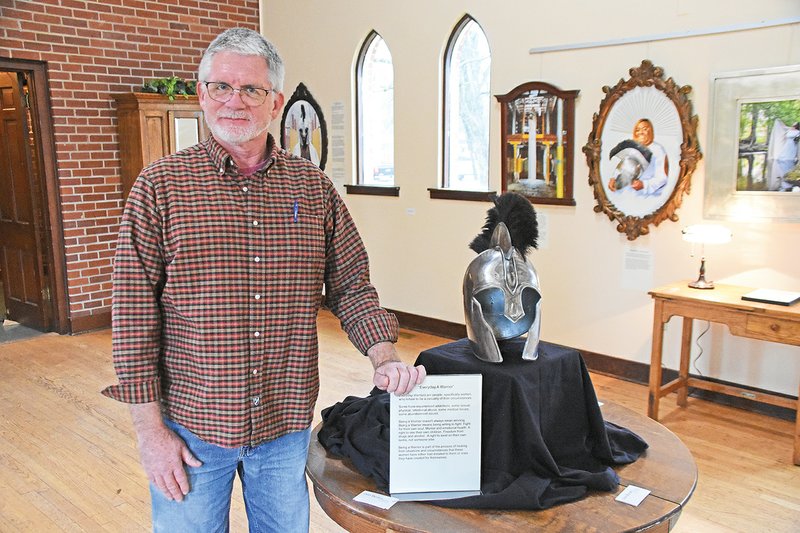 Conway artist/photographer Don Byram uses this Spartan helmet in each of the photos he displays in the Everyday a Warrior exhibit currently on view at Saint Peter’s Episcopal Church Parish Hall in Conway. He said the helmet represents the “inner warrior” of the women he photographed, who share their stories of abuse, mental illness, addiction and abandonment in written testimonies displayed alongside their photographs. ( Staci Vandagriff)

CONWAY — Saint Peter’s Artists Collective began 2020 by sponsoring an exhibit of photographs in the Saint Peter’s Episcopal Church Parish Hall, 925 Mitchell St. The exhibit features photos of more than 20 women from central Arkansas who have been victims of various forms of abandonment, abuse, mental illness and addiction, but refuse to be called “victims.”

Conway artist/photographer Don Byram, president of the Conway League of Artists, highlights these women and their stories in the exhibit, Everyday a Warrior. Central to each photo is a Spartan helmet, which, Byram said, is “a symbol of the inner warrior” featured in each of the photos.

“Each woman has written her own story,” said Marilyn Rishkofski, coordinator of SPARC, the church’s art ministry, and co-president of the Conway League of Artists from 2016-2018.

“You may ask why such an exhibit is on view here at Saint Peter’s. There is a spiritual connection between art and faith,” she said. “This exhibit is the story of their spiritual journey and what they’ve been through. The vision for SPARC is to be an intentional community space where the intersection of the arts and faith is celebrated.

“Don Byram is a conceptual artist. What he shows in this exhibit does not end with the photograph and frame. The helmet he uses in each photo shows the inner warrior in these women.”

A native Arkansan, Byram, who owned a custom frame shop in Georgia before moving back to Conway in 2016, frames these photographs in vintage/antique or repurposed frames, explaining, “The end result is each piece has an exclusive feeling … telling its own unique story for the viewer.”

One of the “warriors” featured in the exhibit is Stephanie Odom, 34, of Conway, who is also an artist — a painter — and a friend of Byram’s. Among other experiences, Odom has been through two failed marriages, lost custody of her children and been involved with drugs. About a year ago, Odom checked herself into a rehabilitation facility for drug and alcohol abuse.

“I’ve turned back to God,” she said. “I’m trying to do things differently. It’s more about continuing to try to fight. … I’m beginning to feel better about myself. … I had to lose everything to start over.”

Although Odom said she has two college degrees and has excelled in a variety of things, “I made bad choices … some I had no control over,” she said.

“We all want to be better people, to live better. Don tells us it’s like playing poker. … Some cards you picked up on your own, and some cards you were dealt … but you’ve got to play the hand you hold.”

Odom’s half-sister, Rhianne Wilson, is another of the “warriors” in this photography exhibit.

“She is seven years younger than me,” Odom said. “We lived apart for the majority of our lives. We are just now getting to know each other again. She is very supportive of this exhibit, too.”

Byram said the photography exhibit began about a year ago.

“Stephanie and I have been friends for a while. She and I met out at Beaverfork Lake, and we were going jogging. It just happened that I had stopped at a flea market in Greenbrier and found this Spartan helmet,” he said.

“I took it out of my car and showed it to her, and she thought it was cool. About that time, she told me she was going to check herself into rehab. We decided not to go jogging but just jump in the lake and do a photo shoot,” Byram said, smiling.

“That’s how all this began. I knew her story … all the stuff she was going through … all her ups and downs, challenges. … I never tell someone I know how they feel, because I don’t,” he said.

“It occurred to me that others might have similar issues,” Byram said. “I started asking people if they knew other women who might want to tell their stories and be photographed. This project has just taken on a life of its own.

“I think telling their stories is a process of healing.”

Odom agreed, but added, “Everybody heals differently. … There is no book on healing.”

This is the third showing of the “warriors” exhibit. It was first shown at the Argenta Gallery in North Little Rock in September 2019, then in October 2019 at The Art Collective in Rogers.

“But hats off to Marilyn. … She has taken it to a different level,” Byram said. “She is trying to get small groups to come and view the exhibit. I will be at these showings, along with one or two of the ‘warriors.’ We will be able to talk one on one with the viewers.”

The Everyday a Warrior photography exhibit will continue through Feb. 21 at Saint Peter’s Parish Hall, which is open to visitors during regular office hours — 9 a.m. to 4 p.m. Monday through Thursday. Questions about accessing the Parish Hall can be directed to the church office at (501) 329-8174 or office@saintpetersconway.org.

Byram and one of the “warriors” will be available by appointment to host an organization or group for a personalized viewing of the project. For available tour times or more information, contact Rishkofski, who serves as curator for the exhibit, at marilyn@artexperienceinc.com.