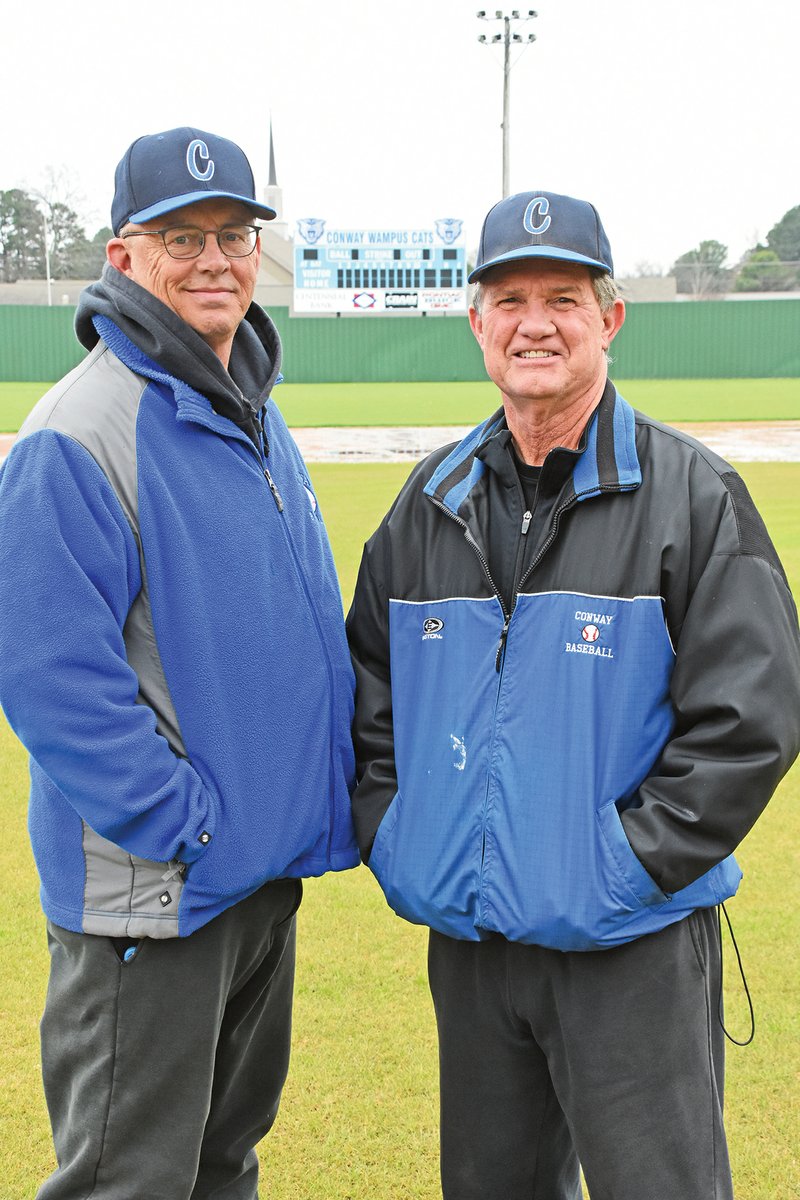 Conway baseball head coach Noel Boucher, right, and assistant coach Barry Lueders have announced that they plan to retire following the 2020 season. Boucher has led the program since its debut in 1985. Lueders joined the team as Boucher’s assistant the following year. ( Staci Vandagriff)

After a final season, the deans of Arkansas high school baseball will hang up their cleats.

In 2020, Noel Boucher will finish his 36th season atop the Conway program. Barry Lueders will complete his 35th season as Boucher’s assistant.

Only Mike Moore of Sheridan is close to them in tenure. Moore is heading into his 35th season at the helm of the Yellowjackets.

“My father (George), rest his soul, always told us we should leave things better than we found them,” said Boucher, 62, the father of the Wampus Cat program. “I feel pretty good about that.”

Since the Wampus Cats’ debut season in 1985, they’ve put together startling numbers:

“I’m not a reflective person — I’m always about what’s next,” Boucher said. “But I think once I retire, I’m going to enjoy reflecting, going back and remembering what happened.”

Conway Athletic Director Clint Ashcraft said it will be odd next year when the Wampus Cats take the field without Boucher and Lueders.

“They have done an outstanding job over the years of building the Conway Wampus Cat baseball program,” Ashcraft said. “They took the program from its infancy stage and developed it into a program that is successful and respected statewide year-in and year-out. They’ll be missed.”

Boucher grew up in Arizona and played at Scottsdale Community College before transferring to the University of Central Arkansas in Conway to play for the Bears and the late Rex Lovell.

“I had some friends who connected me out here,” Boucher said. “Kids now go all over the place, but at that time, it was kind of weird.”

He graduated with a degree in health and physical education in 1981 and spent some time playing with the Houston Astros organization as an outfielder. Just before the season, though, he broke an ankle sliding into base. He returned to Conway and got a job at Conway High School.

Conway didn’t have a baseball program when he went there in 1982, so his coaching assignment was football and basketball.

“Evidently, they were planning [to start a baseball program], and they had it in their mind they were going to try to hire somebody with a baseball background, just in case,” Boucher said. “So the first two years, I was a football and basketball coach.

“And I was a horrendous basketball coach — terrible. I’ll be the first to admit that.”

In fall 1984, he was named the founding coach of the Wampus Cat baseball program, which would begin in the spring of ’85. Jim Brown served as his assistant.

“We had a grand total of about three months to get ready,” Boucher remembered. “We played at the old YBMA (Young Business Men’s Association) field at the old fairgrounds, and I walked out there and thought, ‘Oh my gosh.’ That first year or two, the kids spent the same amount of time with shovels and rakes in their hands as they did practicing baseball.”

Lueders, 61, hails from Mountain Home and was Boucher’s teammate at UCA. After baseball, Lueders left school without his degree, but women’s basketball coach Ron Marvel offered him an assistantship to return to finish his degree in physical education and social studies.

“That was probably the best thing that could’ve happened to me,” Lueders said.

While he wasn’t officially part of the Wampus Cat program that debut year, he had plenty of familiarity with it.

“I umpired nearly every game they had at home, and I was over there practicing when I wasn’t at UCA,” Lueders remembered.

Boucher remembers calling his old buddy after that first season to gauge his interest in joining him at CHS to replace Brown.

“I said, ‘Hey, want to come over here and coach baseball with me? You’ll have to coach football, too,’” Boucher said. “He said, ‘Football?’”

Lueders said he knew “absolutely nothing” about football then, but he’s completed 35 years of coaching the sport at the middle school level. He retires as head coach at Carl Stuart Middle School. On the diamond, he is Conway’s pitching coach.

The Wampus Cats made the move to their on-campus facility in 1988. It’s now known as The Field.

“That was an old city softball field that had a little bit of a backstop,” Boucher remembered. “We had to move the fence back and bring dirt in. The first year we played there, there was no grass on the infield. There was a strip of grass where the softball field used to be, then more dirt. It was pretty rough.

“But you’ve got to start someplace, and it gave me lots to do.”

In 1988, he got a big piece of butcher paper and drew his vision for the ballpark — a “real” fence (not chain-link), a backstop people could see through, a concourse, a press box, a concession stand, a storage facility, a batting cage and a locker room.

Over the years, he got it all.

“Anytime somebody came up and said, ‘We want to do this, or we want to do that,’ if it fell into how I pictured it, I said, ‘That’s a great idea,’” Boucher said. “If it didn’t, I told them we were thinking of something else. We turned some stuff down that didn’t fit, but we got what we wanted.”

The Wampus Cats dressed in their cars before the locker room was finished in 2007.

The last piece of Boucher’s vision was completed last year.

“We covered the cooking deck and got new lights out there we desperately needed,” he said. “Now I’m going to turn it over to somebody else.”

After their retirement, they’ll spend more time with their families.

Boucher’s wife, Ronda, retired a few years ago after a career teaching in the Conway district. They have three sons — Jacob is a sports medicine physician in Columbus, Ohio; Adam runs The Fieldhouse, a sports training facility in Conway; and Aaron coaches high school baseball in Marysville, Ohio — and three grandsons: Sam, 5; Jack, 2; and Beckett, 9 months.

“I’m not making any plans the first year; I’m just going to wing it,” Boucher said. “I’m going to fish, go to ballgames, putter and do whatever. I’ve spent the past two years as a weekend warrior building a cabin in Mountain View on the White River. We finished around Thanksgiving to have the family there, so we’ll spend some time up there. I like to fish; I like to hunt; I like being outside.”

Before then, though, there’s one more season at The Field. A benefit game against Rogers on Feb. 29 will start the season.

Lueders said he knows his emotions will catch up with him.

Boucher said he thinks their last Wampus Cat team will be fine.

“We have some good role-players in the upper grades,” he said. “We have really good sophomore and freshman classes — very, very, very good — that I will not see as their coach, but somebody’s going to come in there and be really lucky. They’re going to be good. We’re trying to work those guys and get them some playing time as much as possible so they’re ready once these seniors leave.

“I say it every year, but I think we’re going to be OK. We’ve got a lot of work to do, and we’ll see how that goes, but I don’t want to leave the cupboard bare.”