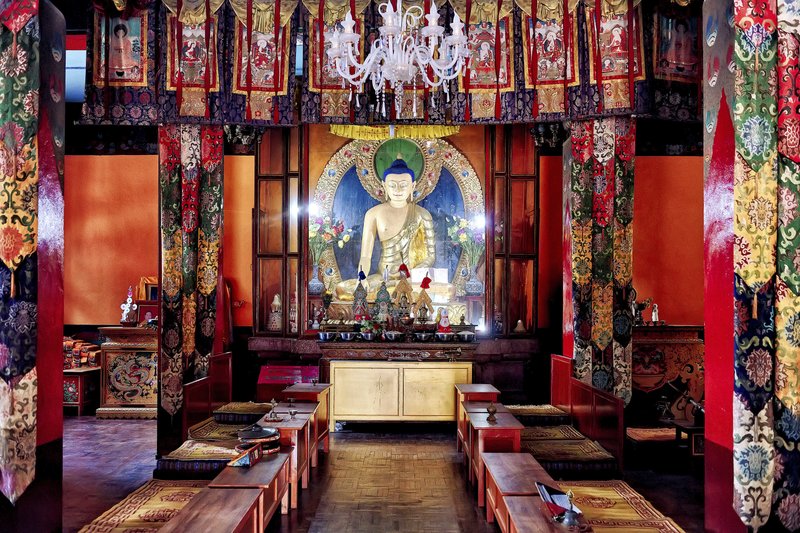 The prayer room at the main temple of the Chokling Monastery near Bir in Himachal Pradesh, India, welcomes visitors for chanting sessions. (The New York Times/Poras Chaudhary)

When I was a child in India, we were the first family on our street to get a television: a huge black and white affair. Occasionally, we'd have neighbors and friends round to watch Bollywood movies filmed in Shimla, the Himalayan city that was once the summer capital of India. With its stunning colonial architecture, snow-capped mountains and rolling green meadows, it looked like paradise.

Now, as a professional chef, I was intrigued by the different ways of living, speaking and eating, and the different rituals ingrained into everyday life in Himachal Pradesh, the northern Indian state straddling the Western Himalayas.

In Himachal, the daily diet is based around lentils, pulses, yogurt and milk: simple flavors with plenty of foraging and little meat. They use what is available and don't let anything go to waste. I began planning a visit. My plans changed when my mother passed away suddenly. The trip was put on hold, and when I was able to return to the idea of making the journey, I decided to go with my father, cherishing the opportunity to spend more time with one of the two people who have shaped my life the most.

From Chandigarh, the northern city designed by modernist architect Le Corbusier, we traveled by car to Shimla, where we were welcomed at The Peterhof Hotel. Built in the 1800s as accommodation for the viceroys (it was home to at least seven of them during the Raj), it was rebuilt in 1991 after a fire.

I was keen to stretch my legs and explore, so I left my father to rest. First stop: the Indian Institute of Advanced Study.

A true Shimla landmark, the Indo-Gothic building, which dates to the late 1800s, stands proudly among pine trees and well-maintained gardens. While it's now home to Ph.D. students, it hosted the famous 1945 Shimla Conferences, and the decision to partition the subcontinent into India and Pakistan was made inside.

After the tour of the spectacular architecture (50 rupees, or about 70 cents), I sat in the cafe and had bread pakoras, deep-fried bread stuffed with mashed potatoes, and a sweet cup of chai. Eating them, I was flooded with memories of traveling with my mother on school holidays to see family in Punjab from West Bengal, where we were living, a 24-hour-long journey. We always had bread pakoras and I thought, why haven't I made them?

I took a taxi to the Ridge, the large, open space in the heart of the city. It was filled with tourists from across the globe, and newlyweds clearly distinguishable by their bright red chula bangles, sitting and watching the world go by.

At Ashiana & Goofa, a restaurant run by the Himachal Pradesh Tourism Development Corp., and where we had dinner, the focus is on authentic, regional home cooking.

You won't find salt and pepper on the tables — instead, you're served onions, chiles and lemon or lime on the side for flavor, along with achar pickles.

We feasted on chickpeas with yogurt — an unusual combination — and a jeera (cumin) rice whose delicious simplicity reminded me of dinners with a childhood friend and her family. The star, though, was the roti, or flatbread, with chickpeas, a simple yet magical combination. 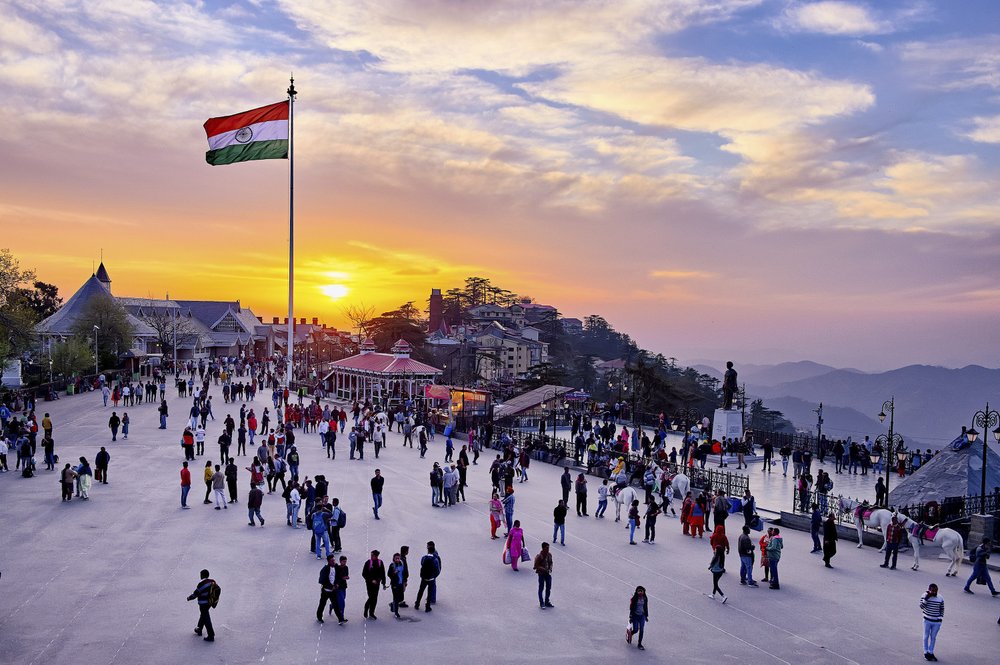 Crowds gather for an evening on the Ridge, an open space at the heart of the city, in Shimla, Himachal Pradesh, India. (The New York Times/Poras Chaudhary)

Thin, crispy aloo paratha, flatbreads stuffed with potatoes, fueled Dad and me for the next leg of our journey: a drive to Rampur, about 75 miles northeast of Shimla.

The change in scenery was instantaneous. We drove down the valley under the shade of lofty trees and views of the snow-covered mountains and traditional villages.

The city of Rampur is connected to major trading routes that join Indian markets with those of Central Asia and Tibet. I was told that the place is buzzing in November when the Lavi Fair comes to town: It is the largest trading event in the north Himalayas and attracts traders from Kashmir, Ladakh, Yarkand in China and other parts of India. Here, you'll find all manner of things for sale: dried fruits, raw wool, pashminas, even stallions. (We traveled in the spring, before India revoked the statehood of Jammu and Kashmir and imposed tight restrictions on communications and movement there, devastating the region's economy.)

After a quick lunch of rajma chawal — a hearty kidney bean curry with rice — we headed out in search of the Bhimakali Temple, said to be 800 years old and dedicated to the ruling deity of the Bushahr region.

While the better-known temples in India are packed full of tourists, pushing and shoving, Bhimakali was genuinely peaceful. The priest told us of an intriguing spiritual walk in the nearby Himalayas, a dangerous path that is only open for two to three weeks a year. 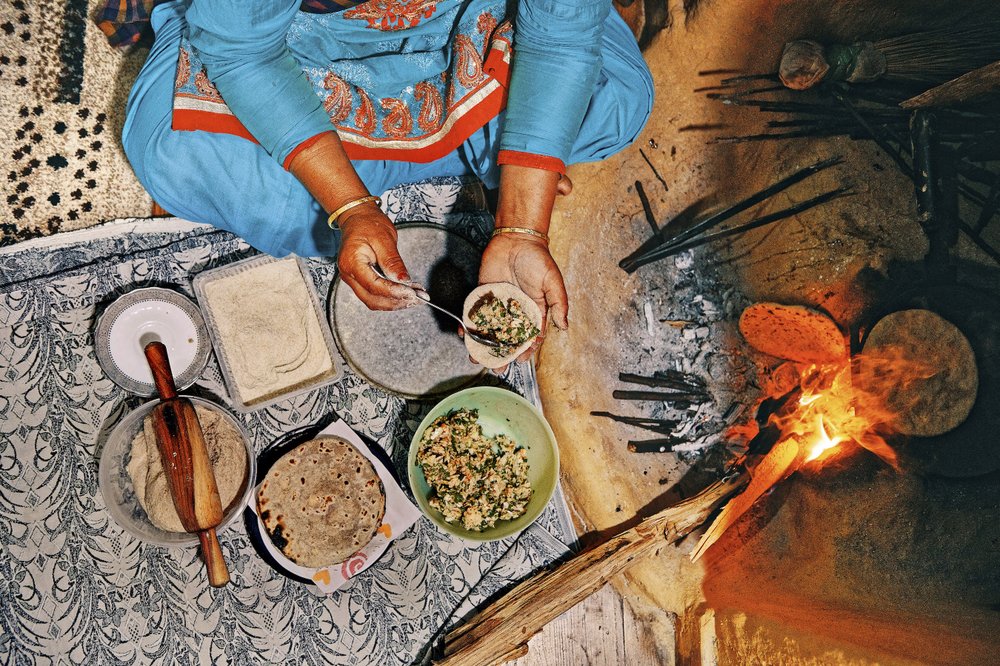 A woman makes stuffed roti at the Kalasan Nursery Farm near the town of Karsog in Himachal Pradesh, India. In Himachal Pradesh, the northern Indian state straddling the Western Himalayas, Punjabi and Tibetan flavors meet. (The New York Times/Poras Chaudhary)

A BRIDGE ACROSS THE RIVER

The parathas we ate for breakfast at our heritage hotel, Nau Nabh, weren't a patch on those we enjoyed in Shimla, but they did the job before our journey to the Kalasan Nursery Farm, near the tiny town of Karsog.

We took the scenic route, which was breathtaking for a number of reasons. The single-track mountain road was terrifying.

From the car window I spotted a rickety-looking pedestrian bridge across the Sutlej River, and, intrigued, I asked the driver to stop. It seemed like a precarious way to cross the river, but I conquered my fear of heights to do so and was rewarded with some of the most memorable views of the trip: the shining mountains on all sides, the river flowing aggressively through the middle.

Weaving our way up a steep and narrow road, we reached the farm where we had booked a farm stay and were greeted by the owner, Vikram Rawat, and his family, who applied a bindi to each of our foreheads, symbolizing honor, love and prosperity, and gave us each a Himachali hat, called a topi. Originally worn to protect the wearers' heads from the biting winter winds, these hats are now a colorful cultural symbol of the state.

Vikram — then still a banker — came to Kalasan 15 years ago. He was encouraged by his wife, Rajni, to establish an orchard and demonstration farm. As she was born in Himachal, they were able to buy land — something that those born outside of the state are not allowed to do.

He and his wife along with their daughters, Vasu and Charu, employ 38 people. Growing their own vegetables, kidney beans and apples, they also sell apple juice and cider, and raise cows, goats and chickens to provide a supply of milk and eggs.

BIR, A HOTBED OF MOMOS — AND PARAGLIDING

At our next destination, Bir, the Colonel's Resort was jaw-droppingly beautiful with horses frolicking in the fields and paragliders floating in the sky — the town is a hotbed for the sport. After taking our luggage to our rooms and leaving Dad to rest his swollen ankles, I set off to explore.

My journey took me along a street flanked on both sides with shacks selling momos and other Tibetan/Indian dishes. As a young girl in Bengal, my cheap meal with friends was momos, dumplings filled with vegetables or meat served either with spicy tomato chutney or soya sauce chili dip. From the corner, I could see young children from the local Tibetan school running around and playing, filling the air with the sounds of joy.

That night was spent chatting with other families staying in the resort and sipping wine around the bonfire, staring up at the stars. Before my trip, I decided that I would try paragliding. Normally, this would have terrified me, but losing my mother made me fearless. But after going to bed early, I awoke to heavy rainfall and thunder, my heart racing at the thought of paragliding in those conditions.

My flight was canceled, so instead we made a stop at the Chokling Monastery, which is open to the public for chanting sessions each evening and is also the best place in Bir to catch a sunset.

Dharamshala was our next and last stop.

On reaching Blossoms Village Resort, I met up with Anamika Singh, whom I had connected with via mutual friends on Facebook. My love of good tea and her knowledge of tea were a match made in heaven. Anamika's father, Abhay Kumar Singh, has been in the tea industry for decades and now runs the Manjhee tea estate, where Anamika creates her own Anandini blends. 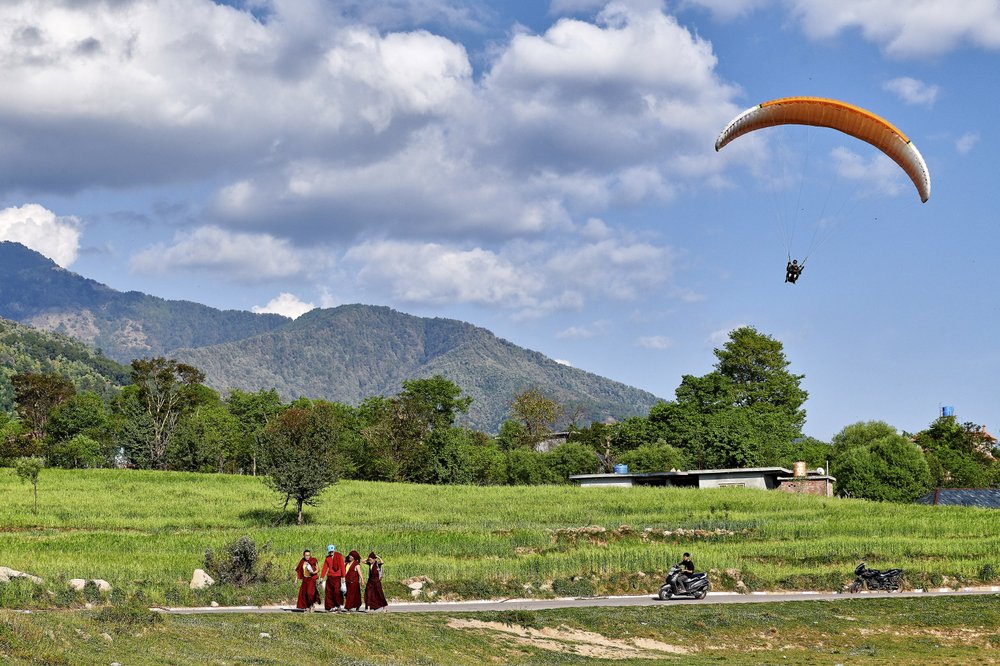 First, we paid a visit to the Dalai Lama temple in Mcleodganj, stopping first for an Indo-Chinese-Tibetan lunch of momos, chili chicken and chow mein, which reminded me of my native Bengal, where the Chinese Hakka community would cook up dishes like these. Then we marched off to the temple.

Unlike other Indian temples, you won't find huge idols outside — this is an incredibly simple building, right at the top of the Mcleodganj hill station. The Dalai Lama was there, and the temple was buzzing with people seeking an appointment for his spiritual guidance.

Early the next morning we went to visit the Manjhee tea estate and do the tea trail.

We were shown how to pluck the leaves from the trees around us — trees approximately 100 years old. We ended with a tea tasting, enjoying different blends and tea from what are known as the first and second flush.

I'd told Anamika of my disappointment at the canceled paragliding experience, and she suggested that we head back and try again.

First, we took a detour to visit the famous Verma dhaba, one of the roadside restaurant and truck stops common in India. Because it was Navaratri — a Hindu festival that celebrates the triumph of good over evil — the queue was incredibly long, but we managed to get a seat to enjoy a thali of khadi (a yogurt-based curry), rajma (kidney beans), dal and tandoori roti with onion and chili. It was one of the most outstanding meals of my life, and we paid something like $3.50 for four of us.

And as an added bonus, when we left we stumbled across an old bicycle vendor selling buransh flowers, which come from a native rhododendron bush, and chickpeas, ingredients which I bought and took back to my father's at the end of my trip to make a Himachali-inspired black chickpea dish.

With full bellies, we approached the paragliding landing site and after a few prayers, I was able to take off, soaring through the air, strapped into a harness with a guide at the glider's controls.

The feelings of exhilaration and accomplishment when I landed were incredible: I experienced a huge rush of adrenaline and was so proud of myself for facing my fears. But those feelings were nothing compared with seeing the look on my dad's face when he saw me land safely: a combination of pride, happiness and relief that I will never forget.