England-area native to speak at conference to promote, educate on hemp industry 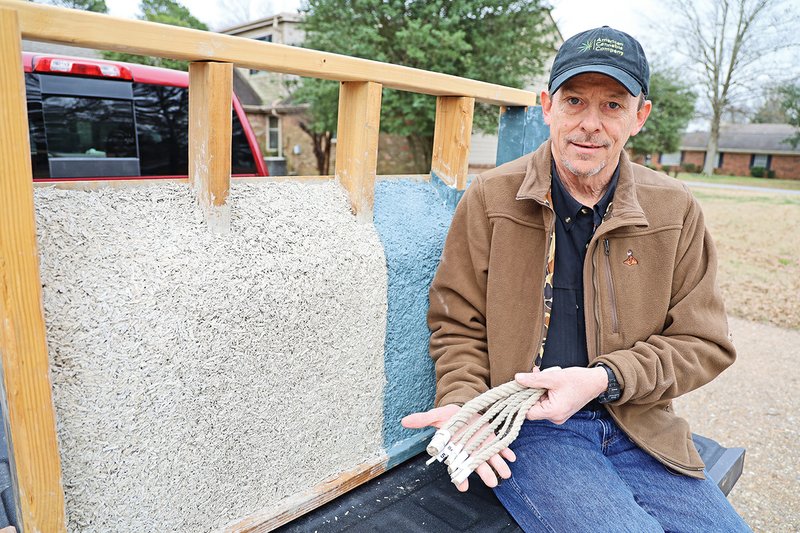 Jon Workman, president of the Arkansas Hemp Association, displays rope made from hemp, as well as hempcrete, a substitute for concrete. Workman will give prospective growers a primer on hemp farming at the Arkansas Farmers’ Industrial Hemp Conference, slated for Feb. 14 and 15 in North Little Rock.

ENGLAND — Jon Workman talked fast as he cruised the two-lane blacktop and country roads of Lonoke County, his hands keeping up with a torrent of facts and statistics. He grew up here, near England, on the western fringe of Arkansas’ famed Grand Prairie, a region internationally famous for its duck hunting and its rice production, but equally important to the state for row crops and cotton.

But as the 56-year-old rounded bends and pointed out stubbled winter fields, he envisioned something else here for Arkansas growers: a forest of shaggy, deep-green industrial hemp.

“I get really excited when we start talking about what can be grown right out there in that cotton field instead of cotton,” he said, motioning to one plot peppered with fallen bolls. “That cotton didn’t get picked until December. You can see a lot of his dollars are out there on the ground right now. With hemp, these dual varieties, not only do they have the seeds, but the fiber as well.”

“Now what does that give the farmer? That gives him two crops at the same time. It diversifies his markets. If one thing’s up, one thing’s down — well, everything works out.”

As president of the Arkansas Hemp Association, Workman preaches the gospel of industrial hemp to a wide congregation of growers, investors, agricultural biologists, politicians and pretty much anyone else who will listen. This month, he will be one of the presenters at the Arkansas Farmers’ Industrial Hemp Conference, a two-day meeting designed to lay out the economic case for hemp. The event is slated for Friday and Saturday at the Wyndham Hotel in downtown North Little Rock.

“First of all, you have to back up a minute and look at hemp in segments. It’s really three primary segments: food, fiber or oil,” he said. “The oil — that’s what most everyone is growing it for. I ran a statistic this morning that in the United States, 87 percent of the hemp grown in the 2019 crop was for oil. When I say food, you’re referring to the grain, the seed, whether you crush it for its protein or for its oil, everything from cooking oils to fuel.

“Here’s a fact: Hemp is the strongest natural fiber on the planet. All your sailing ships used [hemp] for their rope. You can buy [hemp] fabrics today, in everything from rayons to sheers. You know how many trees a day we kill for paper? We kill 27,000. I can grow that in four months.”

Industrial hemp is a plant of the species Cannabis sativa, the same botanical classification as its cousin marijuana, according to the Agricultural Marketing Resource Center. Both plants are similar in appearance and grow in much the same manner, but there’s one important distinction: Marijuana can get a person high, due to a naturally occurring substance called tetrahydrocannabinol, or THC. The AMRC reports that hemp does not contain THC, or at least not enough of it for a psychoactive effect; hemp has only about 0.3 percent THC compared to 3 to 30 percent in marijuana.

The 2018 Farm Bill represented a watershed moment for the U.S. hemp industry, as for the first time, the federal government formally recognized the difference between hemp and marijuana, thus decriminalizing the plant and opening the door to commercial hemp farming, although growers still need a license to grow hemp, Workman said.

Because hemp farming is so new, Workman spends a good deal of time educating prospective growers on plant agronomy, he said.

“What type of soil works best for hemp? That’s probably a good question for what our farmers need to know,” he said. “It’s definitely not clay-based. You can grow hemp in Stuttgart; sure, you can, but it’s not going to grow real well. It will grow in clay-based [soil], but it likes a sandy loam.

“Now that brings up a problem because one of the crops grown here in Arkansas for the past dozen decades, cotton — it’s the same type of soil. Problem with that is, for cotton pest control, we use all kinds of really nasty stuff and herbicides, like one called DSMA and one called MSMA, and they both leave an arsenic footprint. Well, hemp is a bioaccumulator. If you’ve got lead, mercury, arsenic, cadmium in the soil, it’s going to be in the plant. You’ve got to deal with that going into the plant because it may be ingested.”

David Frazer, a native of Dermott who now lives in Taos, New Mexico, said he got into industrial hemp farming two years ago. He’s involved with growing operations in both states, affording him a unique perspective on the impact of environment on plant production.

“We’ve done 55,000 plants on 30 acres [in Arkansas] and had a pretty good yield. I’d say we averaged 1,500 pounds to the acre,” he said. “The difference is, my quality in New Mexico far surpasses the quality here in Arkansas. I just brought back a load of stuff from out there that I’m going to sell, at minimum, for $350 a pound, and the stuff here in Arkansas is going for $10 a pound.”

“That being said, my yield out there isn’t near what it is in Arkansas. I can produce a far higher-quality product, but I can only produce a fourth of it.”

Frazier said growers can close the quality gap with proper drying and other post-harvest processing, and therein lies the biggest challenge. Such facilities aren’t common, he said; in fact, not one such facility — at minimum a multimillion-dollar undertaking — currently exists in Arkansas.

“I would say that at harvest, there was probably 10 times more hemp on the market than the processors that were established at that point could process in three years,” he said. “So right now, there’s hemp scattered all over the market. In New Mexico, I haven’t heard of one farmer making any money, not one farmer as of right now.”

Frazier is not pessimistic on Arkansas as a hemp-producing state — in fact, he’s leading efforts to create a cooperative of growers in McGehee — but he said farmers have to focus on yields that will provide the most return on investment rather than, say, chasing the current CBD craze. He said he constantly preaches to prospective growers to help them separate hype from real-world conditions.

“Everybody thinks that the next big thing is going to make them a million dollars,” he said. “Whenever someone calls me, the biggest thing that I can tell them is to approach cautiously and to not invest something that you’re not willing to lose. We have $325,000 invested this year, and I’ve not sold any hemp from Arkansas. I’ve only sold stuff from my farm in New Mexico.”

“I do think Arkansas can compete in the industry. I just think that we should beef up on other products, not the CBD side of it. The fiber and things like that — we can match and compete on those. CBD takes an enormous amount of labor; it’s not farming on the tractor. I had 13 women who worked for me this year in the field, and they were out there every day, chopping. Our labor bill just on 15 acres pushed over $50,000.”

Jeremy Fisher is an Arkansas hemp entrepreneur and co-founder and past president of the AHA. He said another way Arkansas can become competitive in the industry is through improved plant genetics.

“I think this plant can definitely be adaptable to our higher humidity, climate, a little more clay soil,” he said. “But it starts with developing the right genetics that can handle this higher humidity, higher heat. Arkansas really could be a great hot spot for growing industrial hemp. It’s just going to take some time to get the genetics right. That’s going to take several years to develop.”

Fisher said that as the industry evolves, the role of the AHA will become even more crucial for Arkansas farmers, processors and other business interests. He said events such as the upcoming Industrial Hemp Conference provides a good platform for issues and opportunities for the various stakeholders in the hemp entrepreneur ecosystem.

“The Hemp Association of Arkansas started out as an educational effort to let people know that there is a program that supports research for industrial hemp, that there are potential markets for this and markets that can go beyond our wildest dreams once opened up,” he said. “Where this association comes into play is with promoting the industry to our policymakers, working with regulatory agencies on the best possible rules and stipulations to help this industry grow, but also keeping some of these bad actors out who aren’t going to produce positive product.

“This whole entire industry is all about patience. It’s taking time; it’s building itself up, whether it’s a nonprofit or it’s a for-profit business. We don’t want it to grow and then just stop. We want it to continue to grow and have members for 50 to 100 years. I hope when I’m old, I can look back and say that it is still a part of Arkansas, it’s still a positive effort, and we’ve come a long way.”