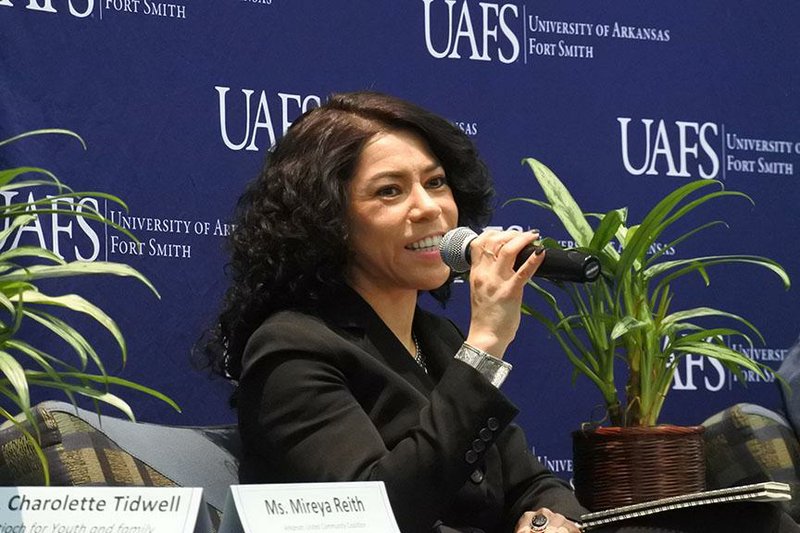 A greater effort is being made in many Arkansas cities to emphasize getting an accurate count in hard-to-count communities during the 2020 census this spring.

Getting an accurate count is important in helping cities receive the maximum federal funding that's based on population. Every year, census data is used in sending billions of federal funds to hospitals, fire departments, schools, roads and other services. It is also used in parceling out more than $1.5 trillion to state and local governments, The Associated Press reported last year.

North Little Rock Mayor Joe Smith said Tuesday at the city's Count Me In Census 2020 Kickoff that census numbers are projected to amount to an average of $3,300 per person per year over the next 10 years.

[Video not showing up above? Click here to watch » https://www.youtube.com/watch?v=7bp3L-6y7qQ]

Census takers work to count every person living in all 50 states, the District of Columbia, and five U.S. territories -- Puerto Rico, American Samoa, Guam, the U.S. Virgin Islands and the Commonwealth of the Northern Mariana Islands. The count is mandated by the Constitution and is conducted every 10 years by the U.S. Census Bureau.

This year, every home will receive an invitation to respond to a short census questionnaire either online, by telephone or by mail.

Cities across the state have created campaigns and task forces to help ensure maximum participation.

The "hard-to-count" designation indicates groups of people and locations that have historically been undercounted in the census, according to Arkansas Advocates for Children and Families, a nonprofit advocacy group. Undercounted residents include children younger than 5, people of color, people with limited English language skills, those in rural communities, those who distrust the government, those who move a lot, people with disabilities, LGBTQ individuals and the homeless.

Mireya Reith, executive director of Arkansas United, an advocacy group for immigrants and a founding member of Arkansas Counts, said state, local and community partnerships will be needed this year because the 2020 census faces several unique challenges.

"It will be a lot of work, and it's kind of intimidating, but we have the energy there this year," she said.

Arkansas has one of the highest hard-to-count populations in the nation, Reith said. High concentrations of hard-to-count people live in the Delta, south Arkansas, north-central Arkansas and parts of Pulaski County, according to Arkansas Advocates for Children and Families.

"We sent out a call to action to reach out to these hard-to-count populations, especially our immigrant communities," Reith said.

Immigrants, especially within Hispanic communities, often fall into multiple hard-to-count categories because of language barriers and mistrust of the government.

Hilda Rosales, a member of North Little Rock's census committee, said that in the past, census officials often put the Hispanic community on the back burner or avoided it altogether.

"Census counters wouldn't even go to houses with Hispanic names on it because of the assumed illegal status, but now these places have kids who are born here," Rosales said. "They need to be counted."

Last year the Supreme Court blocked a proposal by the Trump administration that would have required every census participant to divulge his U.S. citizenship status, but Reith said the damage had already been done by the time the court ruled.

"We knew after that, this was going to be an exceptional challenge," she said of getting an accurate count.

Geovanny Sarmiento, vice president of community engagement and inclusion for the Rogers-Lowell Area Chamber of Commerce, said a lot of concerns and misconceptions about the census remain within immigrant communities.

"For the Latino community there is a fear that citizenship questions will be asked in the census," he said. "Latino families are also concerned about people coming to their home and knocking on their doors after recent events. There is a lot of fear, and it's not easy to combat that fear."

To help address such concerns, state and local officials are asking for help from faith-based organizations and social clubs within immigrant communities because those organizations have more of the residents' trust.

"We emphasize these answers are confidential and have nothing to do with immigration," Sarmiento said. "We have people who they trust and identify with to tell them this."

Gina Gomez, executive director for El Centro Hispano in Jonesboro, said her organization has taken the lead in reaching out to the Hispanic community.

"In this political climate our people are afraid to provide information," Gomez said. "But they trust us. ... It allows our community to see familiar faces who come from the same background."

Local school systems also provide an option for city leaders seeking to break down the barriers in immigrant communities.

Maria Haley, North Little Rock High School's English as a Second Language coordinator and director of Seis Puentes, is working with the city to reach out to international populations, including Guatemalans, Hondurans, Mexicans and South Koreans, according to city officials.

"In De Queen we have a large number of hard-to-count, but they are mostly farmers who don't trust the government because they think it will make their taxes go up," Reith said. "We have learned [that] in that regard immigrants and rural Americans aren't too different."

However, trusted messengers can't be the only solution for getting better participation in hard-to-count areas, Reith said. Officials also must make sure that the message being delivered is accurate. That can include something as simple as explaining how getting an accurate population count could help attract national food chains to an area or help fix deteriorating roads.

"Everybody hates traffic," she said.

Getting an accurate count is particularly important for diverse cities like Springdale, where officials believe they undercounted Marshallese and Hispanic populations by 10,000 to 20,000 in the previous census.

"This has negatively affected Springdale when it comes to funding and much more," Reith said.

"We have 44 languages spoken in our school system," Sprouse said. "We have the largest Marshallese population in the United States, and our city is 35% Hispanic. ... We have people who look like Springdale on the board."

Tyson Foods Inc., a multinational corporation based in Springdale, is also participating in the efforts to ensure an accurate count.

John Tyson, the company's chief sustainability officer, was appointed by Gov. Asa Hutchinson to serve as a member of the Arkansas Complete Counts Committee and is leading the company's efforts to communicate the importance of census participation to team members.

"We awarded a $50,000 grant to ACCC to focus the efforts of a broad-based nationwide coalition in support of census outreach in Arkansas' 'hard to reach' counties," spokesman Derek Burleson said in an email. "Our goal is to ensure our team members are counted and Arkansas communities receive its fair share of federal financial support."

Burleson said Tyson Foods is also working on its own internal campaign, since the company is a major employer in many communities.

"With 25,000 team members in Arkansas, we have a responsibility to invest in our people and the communities where we work and live," Tyson said. "That includes communicating the importance of census participation to our employees and dedicating company time and resources to helping everyone understand."

Reith said she believes census participation is also a chance for immigrant communities to show how proud they are to be a part of the state.

"We mentioned the distrust," she said, "but maybe we can tear it down beginning with this effort, and instead we can start building bridges."