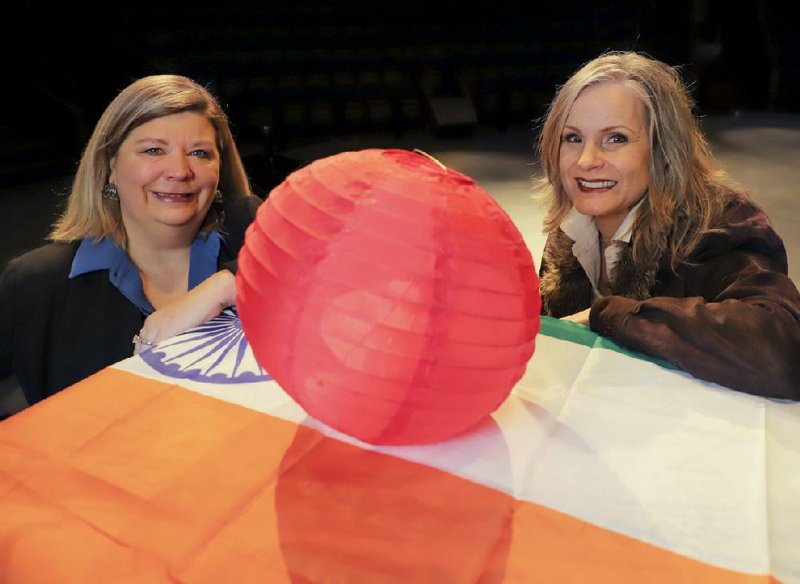 Amy Glover Bryant and Kira Keating are the first volunteer co-chairwomen of the Lanterns! festival, Feb. 29-March 1 at Wildwood Park for the Arts. The yearly fundraiser offers what is essentially cheap travel via “vistas” that each celebrate a country or an area of the United States. Among this year’s vistas is one representing India ... which has turned Bryant, who’s working with that vista, on to cardamom tea.

Board member Amy Glover Bryant and performing artist Kira Keating are no strangers to Lanterns!. That's the annual "deep-winter" nighttime festival that celebrates the first full moon of the lunar new year and is held at west Little Rock's Wildwood Park for the Arts.

Both have worked behind the scenes, helping create the cultural "vistas" -- different ones each year -- that provide festival guests the opportunity to visit foreign countries, and special spots in the United States, without having to pay transportation and lodging costs.

For Lanterns! 2020, scheduled for Feb. 28-March 1, the two have teamed up as co-chairwomen of Lanterns!. Under their watch, the event has been expanded and tweaked to provide guests with the optimum cultural-immersion and entertainment experience at Wildwood, a facility that pays homage to nature and the arts.

Bryant describes Lanterns! as "a great gateway for families and [individuals] to experience Wildwood and start to see what we're about."

"Part of what I do at Lanterns! ... is walk around and ask people, 'How much do you know about the park? ... Do you know that it's open every day? You can come back and bring your dogs.' I think that's one of the great benefits of Lanterns! for us, as a resource, and west Little Rock ... it pulls people in who don't think that they're 'Wildwood people.'"

This will be Keatings' fifth year and Bryant's fourth year of involvement with the three-night event, during which guests will be able to take strolls through the park's luminaria-lighted paths and peruse the vistas. Located throughout the Park's Butler Arboretum and inside the Lucy Lockett Cabe Festival Theatre, each vista will offer food, drink, entertainment and games among other activities. Proceeds will support Wildwood facilities and programs.

Bryant has been a patron of Wildwood, through her family, for the entire life of the park. For the last four to five years, the Realtor with Coldwell Banker RPM has been more personally involved with the park as a volunteer. She and her husband, Kent Bryant, volunteered for the Canada vista their first year helping out with Lanterns!. The following year, they worked with the New York vista. Last year, Bryant was assigned to the United Kingdom vista; this year, she's helping create the India vista. "This has got me drinking cardamom tea," she says.

Keating, a singer-actress, became involved with Wildwood after she and her husband, fellow Canadian and Wildwood executive artistic director Bevan Keating, moved to the state in 2004.

"When we moved here ... [Wildwood] was an opera theater," Kira Keating recalls. "I had auditioned [and] been in some of the shows. And we just thought it was such a great place." The couple's first stint as volunteers was helping out at the Canada vista at that previous Lanterns!.

Then her husband, who'd done some directing of Wildwood productions, was asked to join the organization as artistic director. He was named executive artistic director in 2019. "Then of course, everything amped up," Kira Keating says.

Planning for this Lanterns! festival began the day after the previous one ended. At least it did in Bryant's case.

"First of all, I was so tired," Bryant recalls. "I was just going to sit on the couch all day." But, "I just sat down and started making plans for this year. Not to say that we worked on it every day for a year, but we really started formulating ideas and thinking about what worked and what didn't and ... where would we like for it to go, not only this year but in years to come.

"With Bevan being the new director, we're seeing a really great energy and growth, new growth happening at the park." And, as a growing board, its members wanted to reorganize the way they went about things rather than depending on the staff, Bryant says.

Which brought in the biggest change to the organization of Lanterns!: This marks the first year it even has chairpeople.

"The big thing for me," Keating notes, "is I wanted [Lanterns!] be so efficient that it continues to be fun, and not just a lot of work. Because it's a lot of work." Another notable change: the 2020 dates don't coincide with the first full moon, so the large, imitation moon, set up high to overlook previous Lanterns! festivals, will be missing.

Manned by costumed volunteers, there will be six vistas in all: China, the South Pacific, Italy, India, New Orleans and Greece (which will have input from the organizers of the annual Greek Food Festival).

One thing planners had to realize is that while they could control such things as food and cost, they couldn't control the weather. Last year, it was damp and cold outside; some of the featured artists couldn't perform.

Organizers are hoping for some relatively warm weather, but even if they don't get it, the show will go on.

"There will be girls in hula skirts" in the South Pacific vista -- "and leggings, if necessary," Bryant says.

There will still be those luminarias lighting the paths, along with actual lanterns that attendees can buy to float across the lake. And the vistas will still provide that cultural-immersion opportunity. (Last year, Germany was among the vistas. It was so popular that it had an offshoot: Wildwood went on to do a fall Oktoberfest event, dubbed Westoberfest.)

Each vista, the women confirm, is its own mini-event.

For the South Pacific vista, for instance, visitors will even have movies to watch, such as Blue Hawaii and, naturally, South Pacific. The vista's kid zone will offer opportunities to make leis and headbands. As part of the New Orleans vista, a parade will go on inside the auditorium. And "in India, you can learn to dance," Bryant says.

And guests can buy food particular to each visa. All main dishes will be $8; sides and desserts, $5. No cash is taken at the festival; guests will be directed to a booth, where they can exchange their cash for Wild Bucks. Cash machines will be available.

"We try to get stuff that is recognizable, but also that's representative so that you can go and say, 'Oh, I've never tried that. Now's a perfect time for me to get a smaller portion and try [it],'" Keating says.

In the India vista, vegetarian food will be sold and yes, Bryant will be extolling the health virtues of that cardamom tea. She ticks off a couple: "It lowers blood pressure, it helps you lose weight ...."

One Lanterns! goal remains constant: that more people will be educated about Wildwood, which beckons with a 105-acre park complete with a lake, themed botanical gardens, a walking trail, 625-seat theater complex and various events and theatrical productions throughout the year.

"When you also realize that it's funding a nonprofit that is all about the arts and nature ... and especially children in the arts ... it's thrilling," Keating says.

Meanwhile, organizers are seeking additional Lanterns! volunteers. Already slated to work along with the two at the festival are volunteers from AmeriCorps, Little Rock Catholic and Central high schools, and any other schools that have Civitan Clubs whose members seek to make their volunteer-hours quotas. "We have a ton of high school students who come," Keating says. "And they're awesome."

GIVE THE GIFT OF TIME

But additional helping hands are welcome.

"Yes we do," Keating quips jokingly.

Volunteers are also sought to aid with other, nonfestival events, the women say, including the Wildwood Academy of Music and the Arts (WAMA); the Masterworks Chorale; Una Voce, the youth choir; and the production of Godspell, running March 27-April 5. 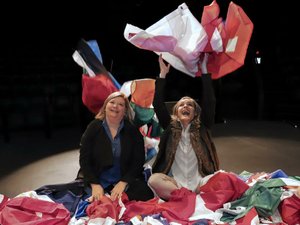 Photo by Arkansas Democrat-Gazette/John Sykes Jr.
As co-chairwomen of Wildwood Park for the Arts’ three-day Lanterns! festival, Amy Glover Bryant and Kira Keating hope to educate more people about the park. Keating says she has found that many people still don’t even know where the Chenal-area Wildwood is. “As a performer, I want them to ... realize there’s a theater here.”