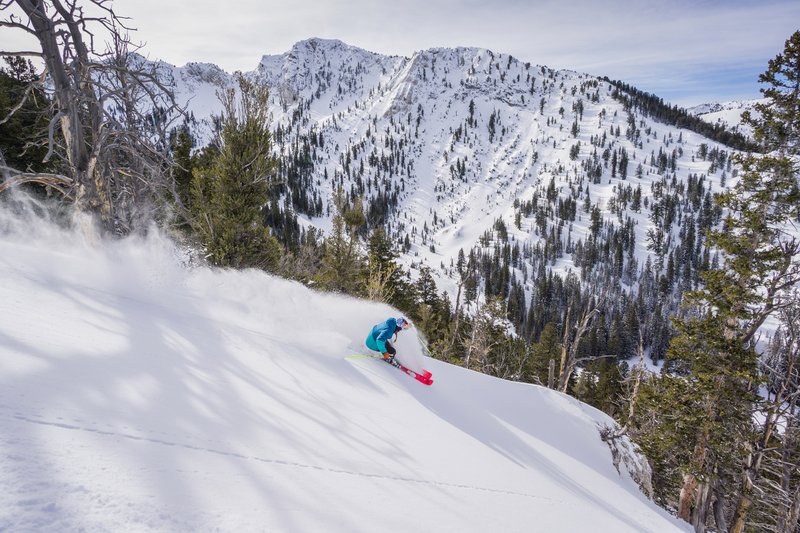 If I never ski again, I could (almost) survive off the 30 years of memories I have from days in Little Cottonwood Canyon, Utah, home of those sacred citadels of skiing — Alta and Snowbird. These adjacent resorts, which together offer more than 5,100 acres of skiable terrain, sit in a geographic storm trap that receives more than 500 inches of snow annually. The resorts share a ridgeline beneath 11,068-foot Mount Baldy, and while you can ski both on a single lift ticket, each has a distinct personality.

Alta is renowned for its vast acreage of burly, untamed terrain — steeps billow like unruly sails beneath auburn crags — and, despite many improvements in recent years, brandishes the throwback label as a badge of honor. It is one of only three resorts in the United States that prohibit snowboarding. Even on crowded days, the bustle at its Wildcat base area has a community vibe.

Snowbird, with its base-to-peak 110-person tram and larger hotels, burnishes a more industrial ambience, although once you point your skis — or snowboard — downhill, you quickly become one with this prodigious mountain. Chutes, cliffs, trees, moguls, screaming groomers, a terrain park and everything in between make Snowbird one of the most diverse and challenging resorts I've skied, and the 3,200-foot vertical drop has noodled my legs many a day. The resort also boasts one of the longest ski seasons in the United States, often running lifts well into June and occasionally to July 4.

But the word was out long ago on Little Cottonwood Canyon, and the lift lines, along with road traffic in the canyon, often reflect that.

Although Solitude's popularity spiked when it joined the Ikon ski pass, the resort maintains a homey atmosphere, with eight lifts (plus a magic carpet) serving 2,494 vertical feet of skiing spread out over 1,200 acres. While not tiny, that's small compared with Alta's 2,614 acres and Snowbird's 2,500 — perhaps one reason Solitude drew 60% fewer visitors than Alta in the 2018-19 ski season, according to a Solitude representative.

Another possible reason: It takes at least two lift rides to get to the top of the mountain, and, once there, accessing some of the best terrain requires traversing or hiking. But that effort is quickly forgotten when you're bombing through forests of untracked snow or carving a white canvas broken only by the richly contrasting hues of dead, twisted bristlecone pine trees.

Some of the most arresting topography is in Honeycomb Canyon, a 335-acre cathedral of cliffs, cornices and small stands of trees where those willing to traverse or hike can sniff out powder days after a storm.

The compact base village is anchored by the Inn at Solitude, with its fire-lit bar, restaurant and outdoor hot tub and pool. Just across a walkway sits the Thirsty Squirrel, an inviting apres bar with occasional music, and the Honeycomb Grill, which features an A-plus bison burger. And after a big snow day at Solitude, that's the same grade that dances in my head as I drift off, grateful for one more powder memory.