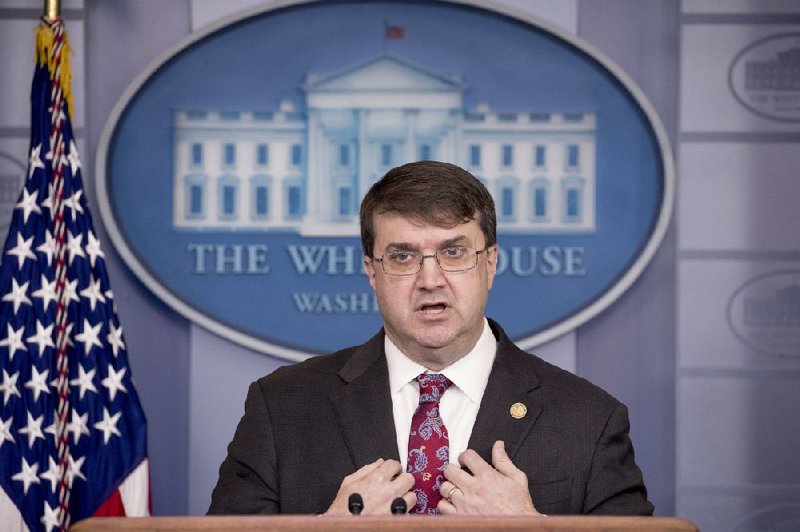 Veterans Affairs Secretary Robert Wilkie, shown in the White House briefing room in November, denied allegations that he made inquiries about the past of a congressman’s aide, according to an agency spokesman. (AP/Andrew Harnik)

WASHINGTON -- The Veterans Affairs Department's inspector general is reviewing a request from a top House leader to investigate allegations that VA Secretary Robert Wilkie sought to dig up dirt on one of the congressman's aides after she said she was sexually assaulted at VA's Washington hospital.

The appeal late Friday from House Veterans Affairs Committee Chairman Mark Takano, D-Calif., came after he received information from a senior VA official, confirmed by The Washington Post, that Wilkie worked to undermine the credibility of the aide, senior policy adviser Andrea Goldstein.

Wilkie, who led the Pentagon's personnel and readiness operation before his VA appointment, began inquiring with military officials last fall about Goldstein's past, according to three people with knowledge of his efforts. That's when Goldstein said a man groped and propositioned her in the main lobby of the VA Medical Center in Washington. Authorities closed the case in January without bringing charges.

Over several months, Wilkie shared his findings with his senior staff at morning meetings on at least six occasions, three current or former senior VA officials confirmed. Wilkie said his inquiry into Goldstein's military service found that the Navy veteran, who currently serves as a Navy Reserve intelligence officer, had filed multiple complaints, according to three people with knowledge of what Wilkie said. Wilkie also served as an intelligence officer in the Navy Reserve.

The information shared with the committee and with The Post said Wilkie was concerned with Goldstein's "credibility and military record." The VA official who shared it said Wilkie described Goldstein to his staff as a "serial sexual assault/harassment complainant in the Navy who made baseless allegations for example when she was not satisfied with a fitness evaluation."

In an interview with The Post, Goldstein said she filed a formal complaint with the Navy just once in 2014 before her experience at the VA hospital. The Post typically does not name people who report a sexual assault, but Goldstein has spoken publicly about her experiences.

Wilkie suggested to several people on his staff, including his public affairs chief, that they use the information to discredit Goldstein, a current and former senior official said. They declined.

Wilkie denied making inquiries into Goldstein's past. "These allegations are false. Period," James Hutton, VA's assistant secretary for public affairs, said. "Secretary Wilkie did not and never would do anything of this sort."

"VA takes all allegations of sexual assault seriously, which is why the department immediately reported Ms. Goldstein's allegations to VA's independent inspector general as well as the deputy attorney general," Hutton said.

Inspector General Michael Missal said he is reviewing Takano's request to investigate. "We take this matter seriously and are considering the request at this time," he said.

The Post was unable to independently determine whether Wilkie or anyone on his behalf asked to access Goldstein's service records. "As a matter of policy, the DoD would not support any such improper request if such a request were received," Defense Department press secretary Alyssa Farah said.

A Takano spokeswoman, Jenni Geurink, said in a statement that the committee "has received details from an individual with knowledge of decision making by senior VA leaders that shows they attempted to gather 'damaging information' about a member of our staff and may have improperly utilized government time and resources to do so."

Missal said this week that the Goldstein case is closed. After a case is closed, it is common practice not to release a confidential internal report of investigation, not even through a public records request -- or to a Cabinet member.