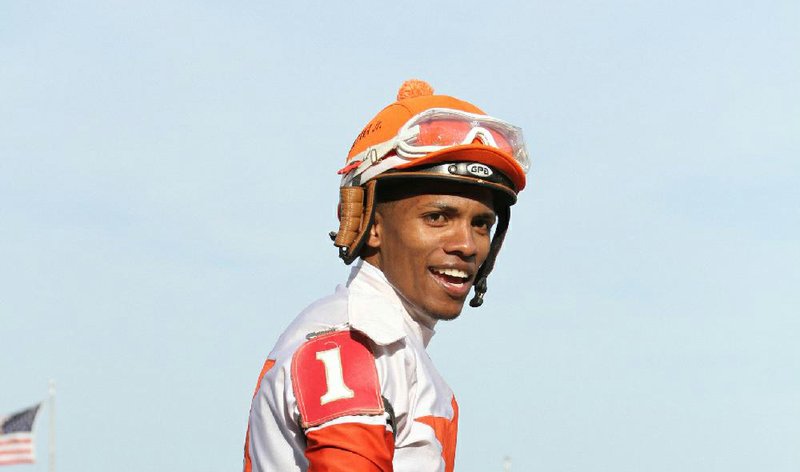 Share the Upside, a 5-year-old gelded son of Maclean's Music trained by Steve Asmussen, had not raced in six months. Since Share the Upside's last start, Asmussen trained the Eclipse Award-winning sprinter Mitole to a win in the Grade I Breeders' Cup Sprint at Santa Anita Park on Nov. 2. Mitole was immediately retired to stud.

Success for Share the Upside was crucial for Asmussen.

"It's necessary," he said. "It is. You know, we've been fortunate to have some of the greatest horses of all time. When they're out of the barn, that ain't beating anybody. They're gone. The irony of it is, when you get one, the next thing, they have a new career."

Whitmore, a 7-year-old gelded son of Pleasantly Perfect trained by Ron Moquett and ridden by Joe Talamo, finished 31/4 lengths ahead of third-place Silver Ride, who was a neck in front of Nun the Less in fourth place.

Moquett was out of town for the King Cotton but watched on his smartphone at his son Chance Moquett's wedding ceremony in Florida.

Chance has been an ardent Whitmore supporter. As an undergraduate at the University of Arkansas, he was a regular at his father's barn at Oaklawn Racing Casino Resort.

"The joke around my family is that Whitmore's like their brother," Moquett said. "Chance tweeted me that one of his brothers would be at the wedding, and the other would be running the King Cotton."

Chance's brother Shay Moquett made the wedding. Whitmore was too busy with a fast front-runner.

Saddled by Ron Moquett's top assistant, Greta Kuntzweiler, Whitmore was fourth, 3 lengths off Share the Upside's lead through the first quarter-mile in 21.89.

"He broke sharp," Share the Upside jockey Ricardo Santana said. "He really wanted the lead, and he was good enough to go that fast and hold everyone off."

Share the Upside led through the half-mile in 44.94. Whitmore was third, 11/2 lengths back. Candy Ride, trained by Robertino Diodoro and ridden by Orlando Mojica, had contact with Whitmore at the start of the turn and was sixth, 31/4 lengths behind the leader.

Silver Ride passed three others in the final quarter.

"The horses that ran first and second were probably the two best horses in the race," Diodoro said. "I thought we were perfect before the turn before Whitmore came up there. He kind of took our position, and we got shuffled back, but I thought he never quit running. You always want to win, but I thought the horse ran well."

As the field entered the stretch, Whitmore fanned out, moved into second at 21/2 lengths back, and looked geared to challenge the leader.

"We got to the quarter pole really nice," Talamo said. "I really thought I was a winner turning for home, but hats off to the winner. He really dug in and fought hard. My horse did, too. He ran a great race, but the winner deserved it."

Ron Moquett was reached by telephone and spoke over the loud background of a wedding reception.

"When no one puts pressure on the lone speed, it's hard to run them down," Moquett said. "We've had that happen to us a few times, and we've also benefited from quite a few horses getting up there and going too fast and making it easy for us to run them down. You live and die by the pace of the race in front of you."

Mitole won Oaklawn's Count Fleet Sprint Handicap by 23/4 lengths over Whitmore last season. The Count Fleet completes the track's stakes series for older sprinters -- this season on April 11 -- and likely will become the ultimate Oaklawn target for several in the King Cotton field, including Share the Upside and Whitmore.

Share the Upside's win improved his career record at Oaklawn to 4-1-0 in five starts. Whitmore, in his fifth Oaklawn campaign, is 7-4-1 in 12 starts.

The Hot Springs Stakes is the next stakes race up for older sprinters at Oaklawn.

"Share the Upside loves Oaklawn," Asmussen said. "I'm glad to see him back here. This is where his best races have been. For him to start off the sprint series so good, we're obviously hoping for a big meet with him."