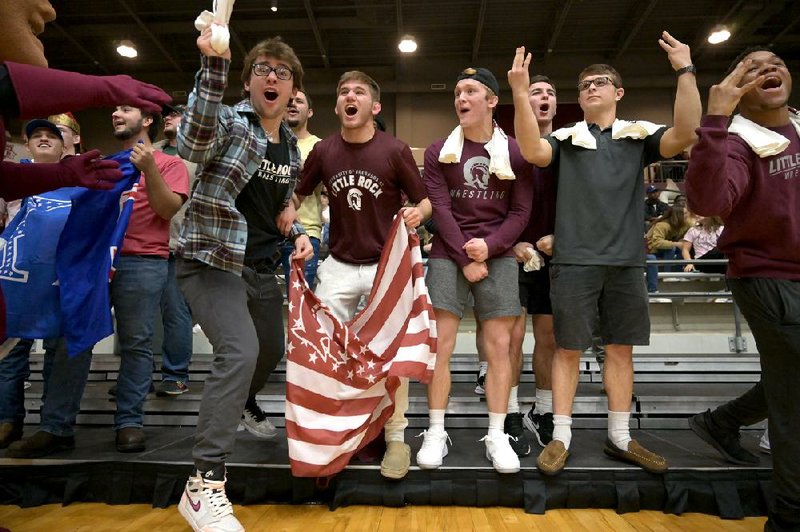 UALR fans react Saturday after a made three-pointer during the Trojans’ 90-87 victory over Arkansas State at the Jack Stephens Center. A crowd of 3,522 watched the game. (Arkansas Democrat-Gazette/Stephen Swofford)

An important factor in the University of Arkansas at Little Rock men's basketball team's ability to wage a big run late in the first half was the Trojans' defensive scheme.

UALR stuck with a 1-3-1 trapping zone for long stretches of Saturday's 90-87 victory over Arkansas State University at the Jack Stephens Center, particularly over the last eight-plus minutes of the first half and throughout the second half. The Trojans also positioned junior forward Ruot Monyyong, who stands 6-10 and possesses an enormous wingspan and good mobility, toward the top to harass ASU ball handlers.

At times, the defense disrupted ASU's offense, especially late in the first half when the Trojans took a 47-36 halftime lead thanks to a 23-11 run over the closing five-plus minutes.

"You can prepare for it, but you can't match how tall and long they are with your own players [in practice]," ASU junior guard Marquis Eaton said. "That's the big difference."

In the second half, ASU slowly started to gain traction against the 1-3-1, whittling away at the deficit until the Red Wolves trailed 55-54 with 13:11 left in the game. The Trojans abandoned the 1-3-1 before going back to it down the stretch.

"Our 1-3-1 trap was not as aggressive as it was in the first half," UALR Coach Darrell Walker said. "They made shots, they made plays, they got back in the game."

It was a battle of Marquis vs. Markquis on Saturday.

Marquis Eaton, ASU's leading scorer, lit up the Jack Stephens Center with six three-pointers en route to a game-high and season-high 25 points. Markquis Nowell, the Sun Belt's third-leading scorer, led the Trojans with 24 points and hit 12 of 12 from the foul line. Nowell has converted 26 consecutive free-throw attempts. Each player finished with five assists.

Eaton had been in a bit of shooting slump from three-point range, going a combined 3 of 11 in his previous three games. He had no such problems against the Trojans, making 6 of 8 from beyond the arc.

"Eaton was excellent," ASU Coach Mike Balado said. "He obviously shot the ball well. One thing that he's doing is working on his game on his own aside from practice, so you can kind of see the results in him shooting the ball well.

"We need him to continue to score that way."

Nowell didn't enjoy Eaton's efficiency, going 5 of 15 from the field and 2 of 7 from three-point range. At times, Nowell took ill-advised shots far behind the three-point line.

Walker appeared to have had enough after Nowell misfired from the right wing in front of the Trojans' coaches while UALR was clinging to a 69-65 lead with under eight minutes to play.

Walker immediately pulled his sophomore point guard for junior guard Jaizec Lottie. Nowell later returned at the 3:22 mark with UALR leading 77-75. He hit a jumper and remained in for the rest of the game.

Ruot Monyyong's double-double (13 points, 11 rebounds) marked his 14th of the season for the Trojans, which is already a single-season program record. That figure also has him among the top 10 nationally.

Monyyong also tallied 4 assists, 2 blocks, 2 steals and hit 9 of 10 from the free-throw line against the Red Wolves.

Nowell wore a white T-shirt that had "heart over height" -- a phrase that's become his own personal slogan -- printed on the front. But it was what was printed in black lettering on the back of the shirt that turned some heads.

It read "Sun Belt player of the year," an award Nowell is firmly in the mix for as the regular season heads for the stretch.

"I knew that if I got this shirt that it would draw a lot of eyes to it," said Nowell, who wore it again during the postgame news conference. "This game, I really wanted to be aggressive, really show people that I'm really going for the Sun Belt player of the year, but I'm still trying to win. This shirt makes me play harder, definitely, and I'm gonna keep wearing this shirt until eventually I get the accolade."

Asked whether he thinks he's already player of the year, Nowell didn't budge.

"I believe it," he said. "I believed it last year, I believe it this year. I'm gonna keep believing it."