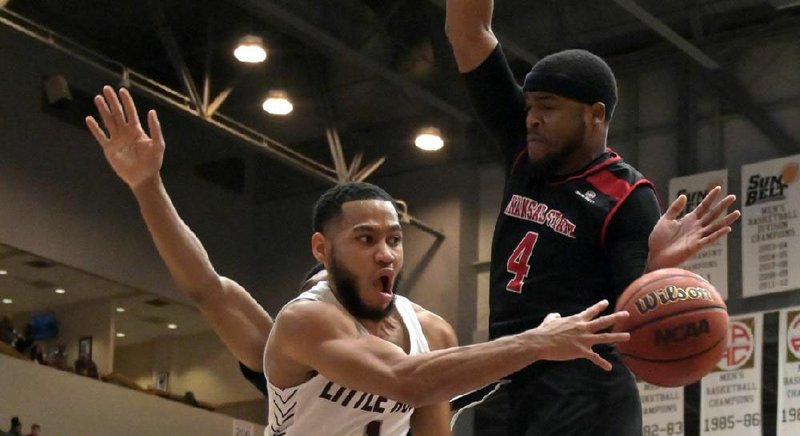 Little Rock Guard Marquis Nowell passes to a teammate from under the basket after faking out Arkansas State Forward J.J. Matthews on defense during the Little Rock vs. Arkansas State Basketball game on Saturday, Feb. 8, 2020 (Arkansas Democrat-Gazette / Stephen Swofford)

Arkansas State University junior guard Marquis Eaton sprinted up the floor with the final seconds melting off the clock Saturday afternoon, needing a three-pointer to force overtime with the University of Arkansas at Little Rock.

The largest crowd all season at the Jack Stephens Center stood nervously.

Eaton was the last person the UALR faithful in the crowd of 3,522 wanted to see attempt a game-tying shot. Until then, Eaton had missed only one of his seven attempts from deep.

But UALR's 6-10, 250-pound sophomore forward Nikola Maric moved in and raised both hands to force Eaton left. He flung a three-pointer with his left hand just before the buzzer, but the ball failed to catch any part of the rim or backboard as the Trojans hung on for a 90-87 victory over their in-state rivals.

"I was just trying to [draw] contact, basically," said Eaton, who finished with a season-high 25 points to lead all scorers. "The way they [guarded me], it was hard to get one off."

After Eaton's miss, UALR players sprinted to the Trojans' student section and were mobbed. For the second time this season, UALR Coach Darrell Walker -- who beat ASU for the first time in his third try -- approached the scorer's table and grabbed the public-address microphone.

The Trojans (18-7, 12-2 Sun Belt) scored in the 90s for the third consecutive game and captured their seventh consecutive victory, the program's longest winning streak since it began the 2015-16 season 11-0.

Despite clawing back from an 11-point halftime deficit -- eventually tying the game 75-75 on Caleb Fields' layup with 4:24 remaining -- ASU (15-10, 7-7) dropped its third consecutive game. The Red Wolves, known for their second-half comebacks this season, outshot UALR 57% to 39% over the final 20 minutes, but they couldn't make enough plays late.

UALR went on a 6-0 run after Fields tied the game as ASU missed a three, turned the ball over and missed a layup. UALR sophomore point guard Markquis Nowell drilled a three to put UALR up 84-77 with 1:51 left, but Eaton answered with two consecutive three-pointers of his own to cut the deficit to one.

The teams traded buckets and a pair of free throws as UALR led 88-87 with 6.4 seconds left. Nowell hit two more at the charity stripe with 4.8 seconds left, which led to Eaton's desperation three.

The Trojans tried to blow the doors off the game after it was tied 27-27 with 4:27 left in the first half.

Junior guard Ben Coupet drilled an open three from the left wing, then scored on a layup after a media timeout. Coupet stole a cross-court pass on the other end that led to a pull-up three by Lukic, putting UALR ahead 35-27 with 2:44 left.

Jerry Johnson answered with a three for ASU, but it only briefly interrupted the Trojans' barrage.

UALR scored nine consecutive points to open up a 44-30 advantage, capping a 17-3 run in less than three minutes. Eaton and Lukic traded threes in the closing minute before Eaton drilled one more at the horn, cutting UALR's lead to 47-36 at the break.

UALR's lead was down to 55-54 by the 13-minute mark in the second half after an 18-8 run by the Red Wolves. UALR went back up by six, but both teams traded punches for the rest of the game.

For the ninth consecutive time, the rivalry game was decided by single digits. UALR will travel to Jonesboro on Feb. 22 for the rematch.

"We've been in a bunch of close games," Walker said. "We didn't fold. I didn't expect my team to fold, and we made some shots." 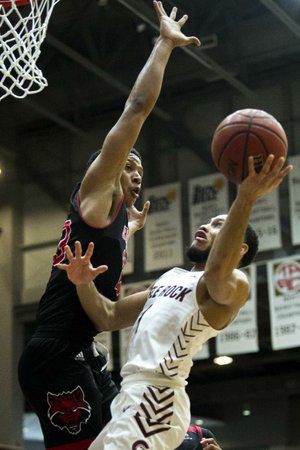 UALR guard Markquis Nowell (right) attempts a shot against Arkansas State guard Marquis Eaton during Saturday’s Sun Belt Conference game at the Jack Stephens Center in Little Rock. Nowell finished with 24 points and went 12 of 12 at the free-throw line to lead the Trojans to a 90-87 victory over the Red Wolves. More photos at arkansasonline.com/29basketball/ (Arkansas Democrat-Gazette/Stephen Swofford) 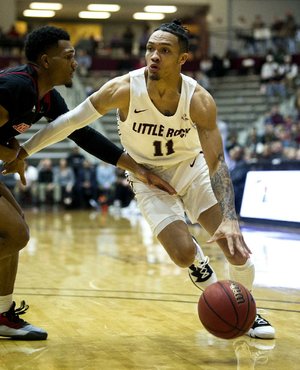 UALR guard Jaizec Lottie (11) drives to the basket against an Arkansas State defender during the Trojans’ 90-87 victory over the Red Wolves on Saturday at the Jack Stpehens Center. More photos are available at arkansasonline.com/29basketball/. (Arkansas Democrat-Gazette/Stephen Swofford)