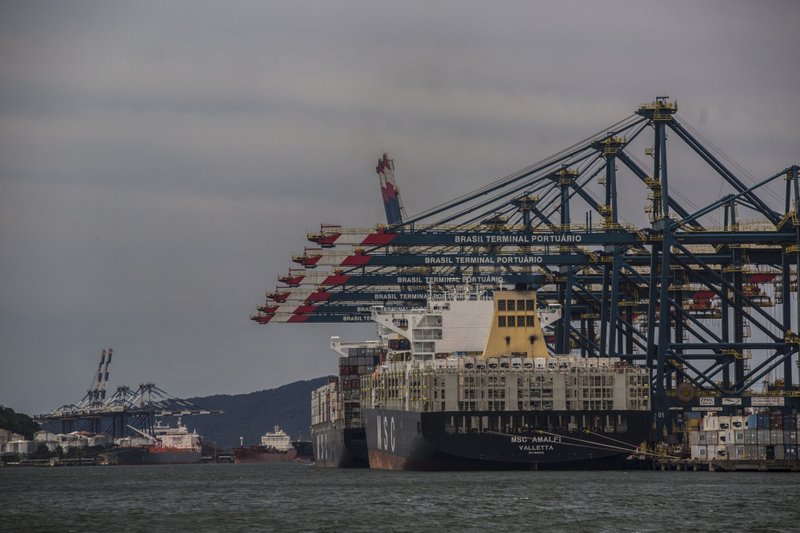 Freighters are loaded with containers at the Brasil Terminal Portuario (BTP) docks in Santos, Brazil, on Oct. 4, 2017. MUST CREDIT: Bloomberg photo by Dado Galdieri.

Brazil, the world's biggest soybean producer and exporter, is grappling with another spate of wild weather, leaving a vessel logjam at ports and causing harvest delays.

Heavy rain is crimping Brazil's crop collection and starting to jam up vessels at the ports in Santos and Paranagua. Robust oilseed demand looms as China, the top buyer, picks up cargoes, easing concerns that the coronavirus virus would dampen commerce.

A "giant" queue of vessels is expected at ports, though shipping delays may be temporary, Pedro Dejneka, a partner at MD Commodities in Chicago, said in a voice message. Brazilian farmers collected the biggest crop ever and are offering more-attractive prices than rivals including the U.S.

In the past two weeks, the volume of soybeans scheduled to ship from major ports doubled to 7 million metric tons, according to data from shipping agency Williams.

China has ordered about 10 cargoes from South America, according to people familiar with the matter. U.S. growers are waiting for signs of increasing demand on the heels of Washington's trade accord with Beijing.

Conditions may improve today and Monday, while more precipitation is forecast for three days starting Tuesday.

"As soon the weather gets drier, shipments will accelerate with Brazil exporting strong volumes" in the first half of the year, Dejneka said.

In January, extreme conditions caused opposite types of turmoil in cities and some agriculture areas that help produce soybeans and sugar cane.

The state government of Minas Gerais reported on Jan. 30 that 55 people were killed by two days of floods and landslides, leaving 30,000 homeless. The capital city of Belo Horizonte had the most rain for the month in 110 years, Somar said. Espirito Santo and northern Rio de Janeiro were also swamped.