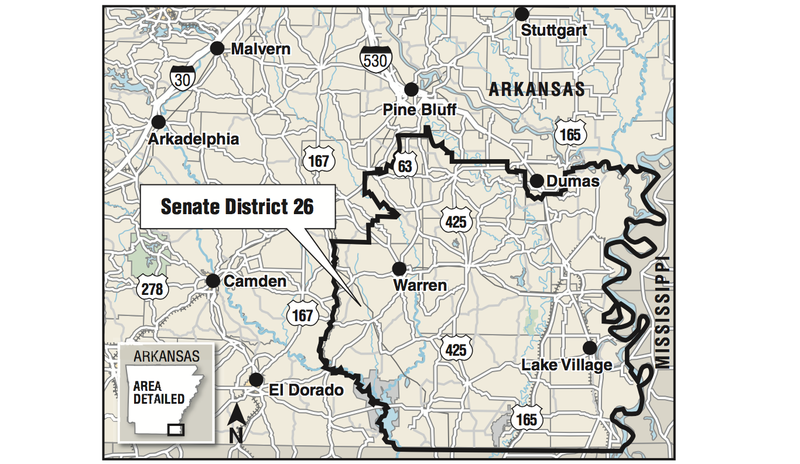 A McGehee farmer and an aide to Lt. Gov. Tim Griffin from Crossett are competing in the March 3 Republican primary for a state Senate seat in southeast Arkansas.

Farmer Bill Dunklin faces Griffin’s deputy chief of staff and communications director, Ben Gilmore. The winner of the primary will face the Democratic incumbent, state Sen. Eddie Cheatham of Crossett, in the Nov. 3 general election. The winner will serve a two-year term in the Senate starting in January.

Cheatham has represented Senate District 26 since 2013, after he defeated Monticello Republican Mike Akin in the 2012 general election by a 50.6% to 49.4% margin. Cheatham also served in the state House of Representatives from 2007-13.

Senate District 26 includes all of Ashley, Bradley, Chicot and Drew counties and parts of Cleveland, Desha and Lincoln counties.

Dunklin, who is a cousin of former state Game and Fish Commissioner George Dunklin, said voters should cast their ballots for him because “I want this place to grow instead of shrink [and] we’ve got to stop the bleeding.

“My main qualification is I live here and I guess I am staying here until I die. I don’t want to say anything bad about anybody else,” Dunklin said, referring to Gilmore.

Dunklin said he has been a farmer for 42 years and farms several thousand acres. He has grown timber, corn, rice, soybeans, cotton, wheat and catfish. He said he served as a Republican on the Desha County Election Commission for nearly 40 years before resigning last year to run for the state Senate.

Gilmore said he is the best choice for voters because “I am the proven conservative and my views reflect that and, if elected, my votes will reflect the conservative values that I share with my voters.

“I think it can be a cheap shot to say that someone hasn’t lived there, hasn’t been there, when the fact I have been there and I have met with the people and that’s why I have received the endorsements I have received from the local officials because they know I will do the work,” he said. These include Bradley County Judge Klay McKinney, Drew County Judge Robert Akin, Ashley County Judge Jim Hudson and Crossett Mayor Scott Mc-Cormick, he said.

Gilmore said he spends most of his evenings in Crossett, which is about a two-hour drive from Little Rock.

“I understand what it means to work cold, rainy, winter days and hot, summer days in south Arkansas,” he said, referring to his work as a licensed electrical apprentice at Master Technicians and Mechanicals in Crossett from 2010-11.

Dunklin, 62, was born in Pine Bluff and graduated from Pine Bluff High School. He received a bachelor’s degree in history and chemistry from Ouachita Baptist University in 1978 and a master’s degree in agronomy from the University of Arkansas, Fayetteville, in 1980.

He is divorced and has four children.

Gilmore, 27, was born in Little Rock and home-schooled in Crossett. He received a bachelor’s degree in business administration from the University of Arkansas at Monticello in 2014. He was an aide to U.S. Rep. Bruce Westerman of Hot Springs from 2015-17. He is single.

Both Dunklin and Gilmore are both making their first bids for elected office.

Gilmore said Dunklin “has voted in Democrat primaries [and] I haven’t, so I think that’s important to note.”

Dunklin initially said he voted in the Democratic primaries to vote for his friend, former Desha County Judge Roy Rogers, when there weren’t Republican candidates on the ballot. Rogers served as county judge from 2013 until he resigned in 2016, according to the county judge’s office.

Dunklin later acknowledged he misspoke when he referred to voting for Rogers. Former state Rep. Mark McElroy of Tillar was the Desha County’s county judge from 1993-2013.

He said his other top priorities would be creating jobs and maintaining good schools.

Gilmore said his main priorities would include focusing on policies that further economic development and job growth, fighting for fiscal responsibility, lowering the regulatory burden on businesses and hard-working Arkansans, and highlighting the importance of reading and STEM education. STEM stands for science, technology, engineering and mathematics.

As for the state’s Medicaid expansion program, Dunklin said, “Obviously, everybody needs good health care, but I’ll research it and make a reasonable judgment on it, if it’s presented to me.”

The state’s Medicaid expansion program is now known as Arkansas Works under Gov. Asa Hutchinson and provides health care coverage to about 246,000 low-income Arkansans. Arkansas’ work requirement for some of its Medicaid expansion participants was struck down by a federal judge in Washington, D.C., in a March ruling that Arkansas and the federal government have appealed.

“I think the work requirement is a good thing that encourages those to work, who are able to work, and still helps those in need,” he said.

“It is a great idea to make everybody tow the line,” he said of vouchers. “It would be incredibly helpful to get tax dollars back to pick the best school.”

Gilmore said, “I support whatever gives the parents the freedom to choose what is best for their child.

“If that is vouchers, if that is public school, if that is home school, I support all of those,” he said.

Both Dunklin and Gilmore said they haven’t determined how they’ll vote on Issue 1 on the Nov. 3 general election ballot. Issue 1 is the proposed constitutional amendment that would permanently extend the state’s 0.5% sales tax for highways and roads approved by voters in November 2012 for a 10-year period. State officials project that in the future, it will raise about $205 million a year for highways and about $44 million apiece for cities and counties for their roads.

Dunklin said he opposes abortion except to save the life of the mother and in cases of rape or incest.

“I can’t see an exception that can justify taking a life,” he said.