GAME ON: 'Slay the Spire' doesn’t get old 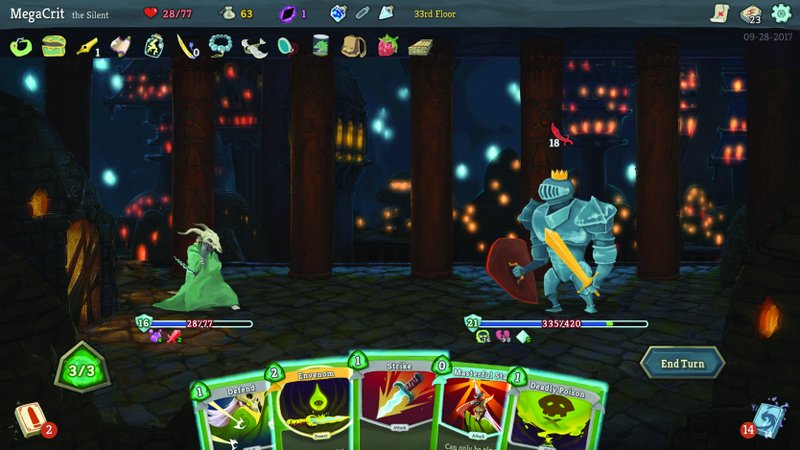 "Slay the Spire" is an intricately designed rogue-like deck-building game that manages to be easy to learn and difficult to master, as each play-through can be wildly different from previous ones.

The roots of "Slay the Spire" can be seen in deck-building board games such as Dominion. Players choose one of four characters, each with a basic starting deck of offense, defense and utility cards, and then add and subtract cards while battling enemies and advancing through the Spire to the final boss.

Each card has an energy cost — usually ranging from 0 to 3 — and at the start, players have 3 energy per combat turn.

Each turn, a hand of cards is drawn from the deck, which starts at 10-12 cards. The enemy's intention for its turn is visible above it, letting players know if it will attack or defend (or sometimes, a combination of moves), which lets players figure out the best counter. Certain enemies also have other moves, such as summing minions, fleeing or splitting in two.

At the end of the player's turn, the remainder of the hand goes into the discard pile, the monster takes its turn and then a new hand is drawn.

When the player runs out of cards, the discard pile is shuffled back into the deck.

After defeating an enemy, the player earns rewards — options such as adding a new card to the deck, a one-time use potion, gold for use in a shop, and even relics, which grant powerful passive abilities for the remainder of the game. The passive abilities include giving the player extra energy every combat turn, improving rewards, making elite bosses weaker and many others.

The Ironclad boasts the highest hit points and is a warrior type — solid offense and defense, and the ability to increase his strength and add more damage to his attacks. His starting relic has him heal hit points after every encounter.

The Silent is a rogue-theme huntress with low hit points that focuses on defense and on stacking poison attacks to deal progressively more damage. At the start of each combat, the Silent draws an extra two cards.

The Defect is an automaton equipped with four types of orbs that offer various abilities. Its gameplay style is different from the Ironclad and the Silent — rather than applying burst damage to take out enemies, the Defect plays defense while slowly building card synergy and power.

The Watcher is a monk-like character that uses battle stances to temporarily double or even triple damage output (at the risk of taking increased damage herself).

Playing a character more unlocks more cards and relics for its class, giving a wider array of options on future play-throughs. In addition to cards for each character, there are also neutral cards that can be obtained. And just to make the game even more random, there are also ways to acquire the cards (and thus special abilities) of other characters.

The fun in "Slay the Spire" is that every play-through starts the same way but quickly veers into a unique experience. No two runs are the same, because the enemies encountered, and cards and relics found, are random each time.

Often, powerful upgrades come with significant downsides. In one play-through, I had the choice to replace my starting "Strike" cards for stronger vampiric cards that heal health. The trade-off was that going forward, my maximum health would be halved. I took the Faustian bargain, though, because I also had a card that would allow me to increase my maximum hit points when I used it to kill an enemy.

Each play-through features Acts 1 through 3, with progress starting over once the final boss in Act 3 is slain. However, once you've beaten Act 3 with all four characters, a new mode unlocks, and it becomes possible to gain access to Act 4, where the final boss is the corrupt heart of the Spire.

If you master the various classes and winning becomes too easy, a game mode called Ascension handicaps players, adding to the difficulty. If Ascension mode is toggled, each win makes the next play-through harder, stacking new negative effects.

Another game mode is the Daily Climb, which adds modifiers that can vastly change gameplay, such as losing one maximum hit point for each room entered, or becoming cursed after every boss battle. Each Daily Climb run is given a score, and a global scoreboard lets players see how they stack up against others.

The final game mode, Custom, allows fully customizable runs, with as many negative or positive modifiers as players want. With dozens of relics and hundreds of cards, every "Slay the Spire" run feels fresh and challenging. A tried-and-true strategy that worked in the past may not be an option if the right cards and relics don't appear, and a new method must be devised on the fly.

This is a game I can see myself coming back to time and again. Versions for Android and iOS are planned for later this year.

Rating: Everyone 10+ for mild fantasy violence

A review copy of "Slay the Spire" was provided by the developer, Mega Crit.