On veracity of Giuliani files, senator’s calling for caution by COMPILED BY DEMOCRAT-GAZETTE STAFF WIRE REPORTS | February 10, 2020 at 7:12 a.m. 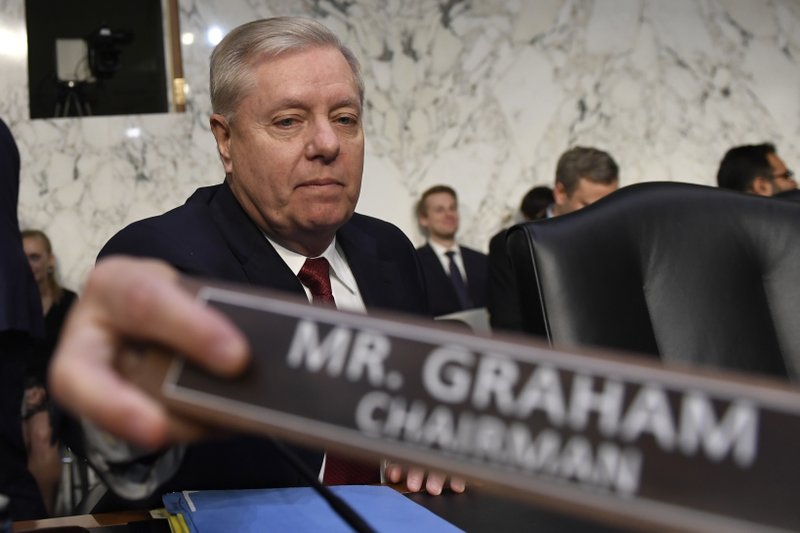 WASHINGTON -- The chairman of the Senate Judiciary Committee, a close ally of President Donald Trump, said Sunday that the Justice Department has established a way to review information gathered in Ukraine by Trump's personal lawyer Rudy Giuliani, who has targeted Democrat Joe Biden and his son.

Sen. Lindsey Graham, R-S.C., said Attorney General William Barr told him during a conversation Sunday that the department has "created a process that Rudy could give information and they would see if it's verified."

But Graham also expressed concerns about the veracity of information gathered in Ukraine.

Graham, appearing on CBS' Face the Nation, said Giuliani is giving his information to national security experts. The senator added that he would back off his own plans to use the Judiciary Committee as a vehicle to investigate the Biden family.

Graham warned that Giuliani in his trips to Ukraine might be getting bad information as part of a disinformation campaign by Russian security experts, citing their efforts to disrupt the 2016 presidential campaign.

"If Rudy Giuliani has any information coming out of the Ukraine, he needs to turn it over to the Department of Justice, because it could be Russian propaganda," Graham said.

Giuliani is also under scrutiny by federal authorities. That means the Justice Department would be putting itself in the position of appearing to work with someone it is actively investigating to gather potentially damaging information against one of the president's political rivals.

Federal prosecutors in New York are investigating Giuliani's business dealings, including whether he failed to register as a foreign agent, according to people familiar with the matter. They were not authorized to discuss the investigation publicly and spoke on the condition of anonymity.

Giuliani also was a central character in the impeachment of Trump over the president's dealings with Ukraine. The attorney for months has pushed corruption allegations against Biden, who's currently a candidate for the Democratic presidential nomination.

Giuliani, appearing Sunday on Fox News Channel's Sunday Morning Futures, said he has a document that relates to Biden's son Hunter, along with a memo allegedly from a Democratic Party official documenting communications with a reporter.

Graham said he called Barr and Senate Intelligence Committee Chairman Richard Burr, R-N.C., on Sunday morning after hearing about Giuliani's interview Saturday night on Fox News' Watters' World. During the interview, the former New York City mayor made various claims about the information he has cobbled together from Ukrainian sources and said Graham should use his committee to investigate the Bidens.

Just as Face the Nation started Sunday morning, Trump sent out a tweet urging Graham to launch some undefined investigations. "He must start up Judiciary and not stop until the job is done. Clean up D.C. now, last chance," Trump said in the tweet, which CBS' Margaret Brennan read to the senator on the air.

Graham appeared to back away from his assertions in recent weeks that he would lead an investigation into Biden, who oversaw the U.S.' policy toward Ukraine during his time as vice president and while his son served on the board of the Ukrainian energy company Burisma.

"I'm not going to be the Republican Christopher Steele," Graham said, mentioning the former British spy whose investigations for Trump's Republican and Democratic rivals in 2016 were eventually sent to the Justice Department.

Graham said that after talking to Barr and Burr, he worried that Giuliani's information might not be trustworthy. "Take very cautiously anything coming out of the Ukraine, against anybody," Graham said.

The Democratic-controlled House impeached Trump last year, alleging abuse of power and obstruction of Congress for pressing Ukraine to investigate the Bidens while delaying delivery of nearly $400 million in congressionally approved security assistance for the Eastern European nation.

Trump was acquitted last week by the Republican-led Senate.

Trump's legal team mounted a defense in the Senate impeachment trial that suggested the president was warranted in asking Ukraine's president, Volodymyr Zelenskiy, to investigate Burisma for corruption -- an apparent effort to counter the testimony from administration officials who said Trump's motive was to hurt the former vice president's 2020 presidential campaign.

Biden's work to pressure Ukraine to fire a top prosecutor had bipartisan support in Congress, where many maintained that a shake-up in that office would lead to more aggressive anti-corruption investigations.

Graham said anything Giuliani has obtained from Ukraine needs to be given to the Justice Department or Congress' intelligence committees "because it could be Russian propaganda."

Graham said Burr also warned him to "take very cautiously" any information from Ukraine. Graham said his message to Giuliani is: "Don't give it to me."

A spokeswoman for Burr did not immediately return an email message seeking comment.

Information for this article was contributed by Darlene Superville and Michael Balsamo of The Associated Press and by Paul Kane of The Washington Post.