This mummy speaks, but it doesn’t say much 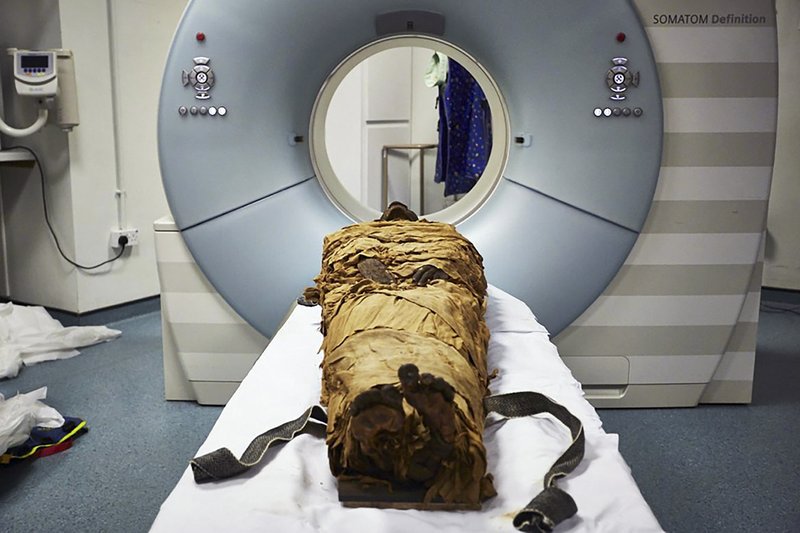 The mummy of Nesyamun, a priest who lived in Thebes about 3,000 years ago, is ready for CT scanning in this undated photo. (The New York Times/Leeds Teaching Hospitals/Leeds Museums and Galleries)

In life, Nesyamun was an Egyptian priest who sang and chanted words of worship at the Karnak temple in Thebes. In death, he was ritually mummified and sealed in a coffin with the inscription "Nesyamun, true of voice." Now, some 3,000 years into the afterlife and with the aid of a 3D-printed vocal tract, Nesyamun can once again be heard.

"He had this wish that his voice would somehow continue into perpetuity," said David Howard, a speech scientist at Royal Holloway, University of London.

Howard and his team used a CT scanner to create a 3D-printed version of Nesyamun's mouth and throat. They combined it with an electronic larynx to reconstruct "the sound that would come out of his vocal tract if he was in his coffin and his larynx came to life again," Howard said.

So far the team has synthesized only a single sound from the mummy, which resembles the "ah" and "eh" vowel sounds heard in the words "bad" and "bed." But the finding, published Jan. 23 in Scientific Reports could lay the groundwork for re-creating and listening to an ancient person's voice.

In September 2016, staff at Leeds City Museum in England, where Nesyamun has resided for the last 200 years, wheeled the mummy to a nearby hospital to be CT scanned. The scan showed that much of his throat had remained intact.

"The actual mummification process was key here," said Joann Fletcher, an Egyptologist at the University of York in England and an author on the paper. "The superb quality of preservation achieved by the ancient embalmers meant that Nesyamun's vocal tract is still in excellent shape."

Using the CT scan, the team 3D-printed a copy of Nesyamun’s vocal tract between the larynx and lips. Howard then took a loudspeaker, similar to one used on an ice cream truck, removed the horn portion and replaced it with the 3D-printed vocal tract. He also connected the loudspeaker to a computer that enabled him to create an electronic waveform similar to what is used in common speech synthesizers. This acted as an artificial larynx. Using the computer software, he could generate a sound that would go through the loudspeaker and into the 3D-printed vocal tract, creating the mummy’s vowel sound.

"He certainly can't speak at the moment," Howard said. "But I think it's perfectly plausible to suggest that one day it will be possible to produce words that are as close as we can make them to what he would have sounded like."

Print Headline: The mummy speaks, but cryptically so far