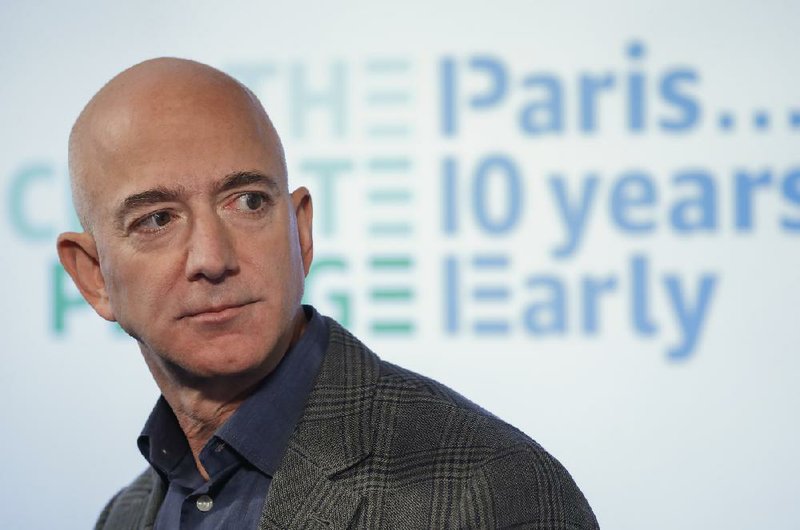 WASHINGTON -- Amazon Web Services is seeking depositions from President Donald Trump and Secretary of Defense Mark Esper in a protest over the Pentagon's handling of a $10 billion cloud computing contract, court records show.

The motion filed Monday in the U.S. Court of Federal Claims raises the stakes in a bitter procurement dispute over a long-awaited defense contract to create the Joint Enterprise Defense Infrastructure, known as JEDI. The contract would create a powerful, centralized computing system for use by the military and operated by a single commercial technology company.

Amazon Web Services, the largest cloud provider, was widely considered the front-runner for the $10 billion contract, but in October, the Defense Department surprised analysts when it awarded the project to Microsoft, the No. 2 provider in the market, after Esper announced he would "reexamine" the Pentagon's approach to JEDI.

Just before Esper's review, the president said in televised remarks that he had received "tremendous complaints" from Amazon's competitors, citing Microsoft, Oracle and IBM.

Amazon alleges the award to Microsoft was tainted by "repeated public and behind-the-scenes attacks" from Trump.

Amazon challenged the decision in December, claiming that Trump used "improper pressure" on the Pentagon to prevent Amazon from winning the contract as part of an attempt to harm the company's chief executive, Jeff Bezos. Trump has criticized Bezos, who also owns The Washington Post, a publication that has reported aggressively on the Trump administration.

"The question is whether the President of the United States should be allowed to use the budget of the DOD to pursue his own personal and political ends," Drew Herdener, an Amazon spokesman, said in a statement.

The Pentagon said it "strongly opposes" Amazon's deposition request, saying it is "unnecessary, burdensome and merely seeks to delay getting this important technology into the hands of our warfighters," according to a statement by Robert Carver, a spokesman for the Department of Defense.

In its filing, Amazon seeks to question Trump on any communications he's had with Microsoft, as well as Oracle, another tech giant that sought the JEDI contract and whose chief executive has dined with the president. Amazon also wants to ask Trump about his communications with James Mattis, former defense secretary, and learn more about his "termination and/or resignation."

Amazon is also seeking to ask the president about his communications with Esper over his appointment, and any discussion they had about the JEDI award.

In its filing, Amazon strives to make a case that Esper worked to scuttle Amazon's JEDI bid at Trump's directive. Shortly after replacing Mattis last summer, Esper said he planned to take a "hard look" at the JEDI award process. Esper and Trump met six times between Aug. 1 and Oct. 8 and Esper met at least five times with procurement personnel evaluating the JEDI proposal in July and September, the filing alleges.

The chairman of the Source Selection Evaluation Board that helped evaluate the JEDI bid, whose name is redacted, attended four of Esper's "information sessions" on the process, Amazon alleges. And it argues that nothing the federal government has providing in the case shows "the procurement officials were not in fact shielded from the President's influence."

Amazon argued in its filing that the meetings of that unnamed official with Esper "aligns strikingly" with the timing of the selection process. "The close contact between Secretary Esper and the SSEB Chairperson particularly concerning," according to Amazon's filing.

Amazon is also seeking to depose Mattis, Dana Deasy, the Pentagon's chief information officer, as well as three members of the committee who helped to make the JEDI selection, whose names have been redacted from the public filing.

The company will have a difficult time convincing the Court of Federal Claims, which hears lawsuits involving federal contracts, that it needs to depose Trump and Esper, said Franklin Turner, a government contracts attorney with the law firm McCarter & English.

"This is something that would be fought tooth and nail by the White House and Department of Justice as strongly as is legally possible," Turner said. "And they have a lot of arrows to fire, because years and years of bid protest law have said 'you have what you need in the agency's record.'"

He added, however, that the JEDI case could depart from the norm because Trump has been so overt with his criticisms of Amazon and Bezos, including while the Pentagon was evaluating bids.

"This case is obviously a little different because the president himself has put him smack dab in the center of the procurement by making repeated public statements [about Amazon and Bezos] over many months," Turner said.

Information for this article was contributed by Aaron Gregg and Jay Greene of The Washington Post and by Karen Weise of The New York Times.