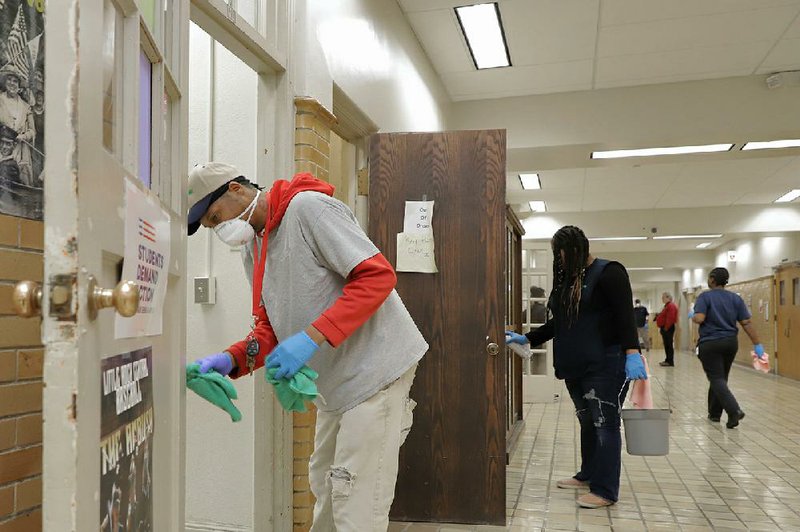 Little Rock School District representatives elaborated Monday on the decision to close the schools for two days this week and to make up missed days later -- rather than direct students and teachers to work at home as allowed by state law.

Pamela Smith, a spokeswoman for the district, said Monday that the district's plan for what are called "Alternative Methods of Instruction" days would require district employees while at home to support student instruction through the use of email, texting or other technology.

That wasn't a viable option this week, Smith said.

"Because of the number of staff who called in sick and high student absences," she said, "it would be insensitive to expect effective educational engagement under these circumstances."

Smith said the district is working instead to identify makeup days later in the year. In the past, makeup days that were needed because of inclement weather or utility failures at campuses typically occurred by adding days to the end of the school year, which is May 27 for students and May 28 for teachers this year.

End-of-year makeup days are an option for this year as well, as are Saturdays and days during the week of spring vacation, which is March 23-27, Smith said.

"The LRSD administration hopes that students, staff and parents are able to utilize these ... days to get rest and recover," Smith wrote in response to questions Monday about the school closures and the decision not to use the Alternative Methods of Instruction days. Social media included many posts from parents and others on Sunday and Monday questioning the district's rationale for passing on use of Alternate Methods of Instruction days.

Leaders of the 23,000-student school system called off classes for Monday and today after receiving an "inordinate amount of calls" Sunday -- more than 250 by 5 p.m. -- from staff saying they were sick. That is nearly double the number of staff who made a similar call on any day the previous week, the district said.

The district's rare decision to close schools systemwide because of illness comes at a time when multiple schools and school districts in central Arkansas have been closed for one or two days because of unusually high absence rates due to flu and/or a desire by school leaders to do some deep cleaning to ward off widespread illnesses. Sheridan, Cabot, Newport, Perryville and individual schools in the Pulaski County Special School District have been closed.

The Little Rock district even closed two elementary schools last week because of high absentee rates. Those two schools used the at-home instruction option to avoid a later makeup day. Smith noted that those schools closed because of pupil absences, not staff.

The Little Rock decision to close all campuses also comes at a time when the state-controlled Little Rock district and the state are sharply at odds with the Little Rock Education Association and individual employees over recent state Board of Education decisions about the Little Rock district. Those include delaying an election of a new school board until November and then to put restrictions on the new board. Also at issue is the state Education Board's ending collective bargaining for employee contracts and decisions to not renew contracts for staff at four schools if they don't find other jobs in the district by the end of April. Three of those schools are closing and one is being converted to a magnet school.

Members of the Little Rock Education Association employee union and others conducted a one-day strike Nov. 14 to show their dissatisfaction with the decisions made in the state-controlled district.

It has been left unsaid by district and association leaders so far this week whether the high number of teachers calling in sick Sunday was a job action -- a sickout -- by the employees union, or whether the association took advantage of the sick days to highlight long-standing objections to the state's role in the district.

Teresa Knapp Gordon, president of the association, said in a statement Sunday evening that she couldn't comment on the illnesses of individuals but that the flu season has "hit our community particularly hard."

"What we can tell you is that there is a confirmed sickness in LRSD, and the state's neglect to treat it is causing catastrophic consequences of endemic proportions," she wrote. "Please know, we will continue to do everything we can to mitigate the harm these sicknesses can inflict on our most valuable resource -- your children."

Gordon, who as recently as Jan. 27 said teachers would be taking more job action against the district, but wouldn't say what kind of action or when, did not respond Monday to a question about whether the teachers are engaged in a sickout.

Little Rock Superintendent Mike Poore referred questions Monday to Smith and did not respond to a question about whether he viewed the teachers calling in sick on Sunday as a job action.

Smith said the district leaders made the best decisions they could about holding school with the information they had about the outbreak of flu in the community and the escalating number of sick calls from staff.

"It is hoped that teachers would never abuse sick leave and that the letter sent out by the Little Rock Education Association would not be used as justification to disrupt the learning environment," Smith wrote. "The decision to close combined every data point that was available to LRSD. It was important to the district to make a decision of this magnitude as quickly as possible so parents would have adequate time to make appropriate plans."

She said the lingering existence of flu in the community was evidenced as recently as Friday, when 36% of Hall High students were out of school because of illness.

Smith said the district is using the time this week to clean and disinfect the schools using the district's maintenance staff and crews from SSC, a company that has a contract with the district to aid in campus upkeep.

In regard to when Alternative Methods of Instruction plans can be used by a district, state regulations allow it in cases of emergency or exceptional circumstance such as a contagious disease outbreak, inclement weather or utility failure.

Kimberly Mundell, a spokesman for the Arkansas Division of Elementary and Secondary Education, said Monday that districts have the discretion to make that determination -- as long as a district uses its virtual instruction plan in conformance with the plan it has on file with the state.

The Little Rock plan states that "the superintendent, in collaboration with LRSD team members, will determine if a day is suitable for use under our AMI regulatory processes."

The district's plan also states that at the start time of the normal school day, teachers will log in to the appropriate online platform to ensure all work is uploaded and the platform has the work ready for student access."

The state assumed control of the Little Rock district in January 2015 by dissolving the local school board and placing the superintendent under state direction because six of 48 schools had been classified by the state as being in academic distress for chronically low literacy and math scores on state exams.

Little Rock teachers and other district employees staged the one-day strike in November to show support for a unified Little Rock district with an elected, autonomous school board. The strike -- the district's first in 32 years -- did not have the effect of closing the schools. Instead the district called in substitutes, including employees at the Arkansas Department of Education, to fill in for striking or absent teachers.

A total of 607 of the district's teachers were reported absent that day while 1,193 were at work. In a typical day, an average 150 teachers are absent in the district. A total of 118 classified staff were listed as absent then while 1,282 reported to work.

More than 13,000 students -- about 56% of the district's enrollment -- were reported absent that November day, well above the average absence number of 1,443, district representatives said at the time.