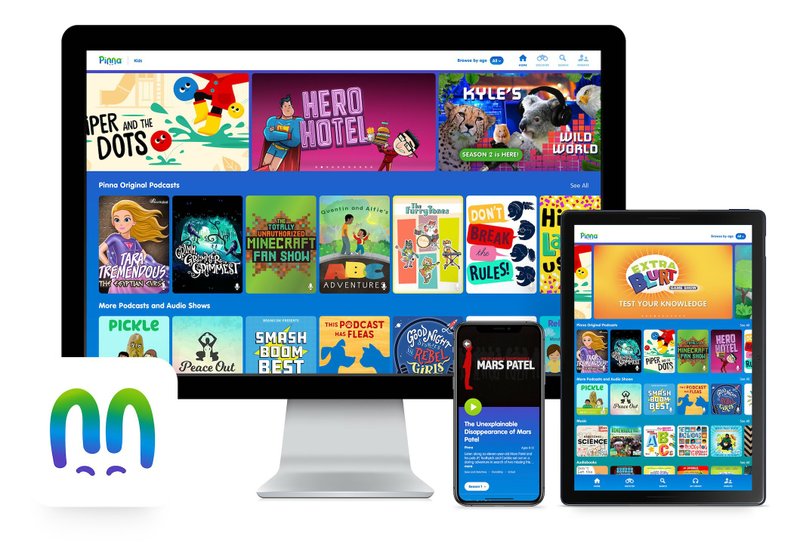 This product image released by Pinna shows the Pinna app displayed on a computer, cellphone and tablet. The on-demand streaming service offers podcasts, audiobooks and music compilations for children. (Pinna via AP)

NEW YORK — Melanie Musson in Belgrade, Mont., does a lot of driving with her four girls. Juggling a broad age range, 1 to 9, she's always searching for ways to keep them all entertained without relying entirely on electronics.

While she still adores paper and tablet books for her kids, Musson said: "I think when they hear without seeing, they have to make up visuals in their heads. That's so good. They have to be engaged and get more out of it."

There are plenty of quality audiobooks, podcasts and music for the young, she noted, but weeding through thousands of selections and jumping from platform to platform is a challenge since audio content has exploded over the last few years.

Dad blogger Balint Horvath in Zurich agreed after trying to make sense of kid options for his 14-month-old daughter.

"I couldn't find any resource that would organize podcasts according to different criteria. Information without proper searchability is like looking for a needle in a haystack," said Horvath, who works as a productivity coach for research and development teams.

Audiobooks and music for children have been around a while, but podcasts made for the 3-to-12 set are relatively new, driving more parents to choose one-stop platforms that include all formats.

With a huge bump in podcasts overall, the value of audio content for children hasn't been lost on companies large and small.

Spotify recently launched a new ad-free app, Spotify Kids, as a free extension for premium family subscribers. Not yet available in the United States, it's packed with singalongs, soundtracks and stories for children as young as 3. A platform called Pinna is among the latest to launch ad-free with a variety of content and ages in mind, at $7.99 a month or $79.99 a year. Others stick to podcasts alone, while Amazon's FreeTime Unlimited allows parents to customize a child's experience to provide the most relevant books, videos, apps and more without ads, starting at $2.99 a month.

GETTING INTO THE ACT

Old-school broadcasters are also getting into the act. Boston's WGBH, for instance, widely shares free of cost two of its top podcasts for young people: Molly of Denali, based on the TV series about a girl in Alaska, and The Creeping Hour, for ages 8 to 12. More are planned as part of the public affiliate's "ongoing exploration of audio storytelling," said WGBH spokeswoman Jeanne Hopkins.

Bonnie Way of Vancouver, British Columbia, has five children, ranging from 2 to 12, and like Musson, she pulls a lot of travel time with her brood. She reaches for audiobooks to keep them happy, even on short trips, and relies a lot on her local library for free selections.

"Yes, it can be challenging to find books that everyone is happy listening to. My 4-year-old is probably exposed to things that her older sisters wouldn't have heard at that age. We started with short stories like Robert Munsch and Curious George, and moved to longer stories like the Chronicles of Narnia," she said.

Some of her kids are prone to motion sickness, and listening rather than reading helps, Way said. She sees other benefits as well.

"Audiobooks create a shared experience. We're able to discuss the books after we've listened to them, which has been a lot of fun," she said.

Maggie McGuire is a former teacher who has been in children's media for more than 20 years. She's now chief executive officer of Pinna, which is backed by the Graham Holdings Co., formed from what remained of The Washington Post Co. after the Post itself was sold to Jeff Bezos five years ago.

Pinna organizes and creates content for children ages 3 to 12. It offers more than 2,000 audiobooks, podcasts and songs while also producing original podcasts, all ad-free and in compliance with federal standards aimed at protecting children's privacy and safety online, McGuire said. It's available as an app and usable off the Pinna.fm website.

Podcasts, McGuire said, are a "fresh new format that everyone's very excited about."

The company worked with parents and teachers to understand what they were looking for in audio content. Among their priorities were a "one-stop solution" and a high level of curation to ensure quality and that all content was tucked into a safe platform exclusively for kids.

"There's a real desire now to figure out how the media diet in a kid's day, in a kid's week, can include things that aren't wholly screen-based," McGuire said.

Last year, Pinna produced 25 podcasts of its own and plans to increase that number this year. Its slate of originals accounts for half the listening among its consumers, McGuire said. The company plans to debut playlists this month. Not unlike other streamers, Pinna will mix new content with classic stories and other familiar standards.

Included is Pinna's Peabody-winning podcast, The Unexplainable Disappearance of Mars Patel, a serial mystery performed by middle graders for middle graders. Another popular original is Grimm, Grimmer, Grimmest, a series of fairy tales retold. It was written and produced by Adam Gidwitz, best-selling author of A Tale Dark and Grimm.

For younger kids, Pinna partnered with Random House Children's Books to turn the publisher's popular Ron Roy book series, A to Z Mysteries, into a podcast. Mo Willems and Rick Riordan are among top names in the company's audiobook lineup on Pinna, along with music from Kidz Bop, They Might be Giants and Ralph's World.

The Amazon-owned Audible.com, a dominant force in audiobooks, is also reaping benefits from the increased interest in kid content. In 2019, the company said, Audible listeners downloaded 40% more such content than they had in 2018. The company offers more than 30,000 titles for children among more than 475,000 overall.

Audible worked with R.L. Stine on its original Camp Red Moon, with Pottermore Publishing on Wizarding World audiobooks and has produced more than 100 audiobooks of the The Baby-Sitters Club series, including some narrated by Elle Fanning. In September, Audible released an original of Jessica Khoury's middle-grade The Mystwick School of Musicraft with music performed by the New Jersey Symphony Orchestra Youth Orchestras. It's now in Audible's Top 20 most-listened-to kid titles of all time.

Parents' nostalgia has played a role in kids' listening, Dapito said, but so has the emergence of home speakers such as Alexa.

"It's easier than ever for kids to have access," she said, "and for everybody to come together."