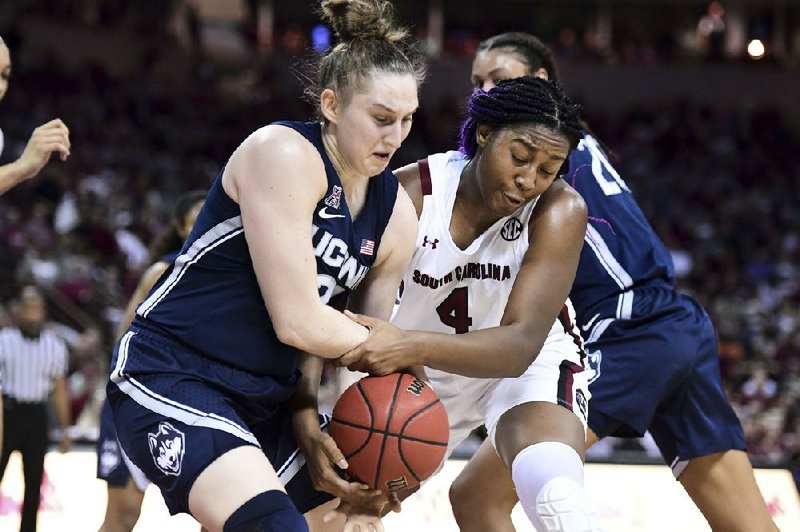 South Carolina’s Aliyah Boston (right) fights for a loose ball with Connecticut’s Anna Makurat during the top-ranked Gamecocks’ victory over the No. 5 Huskies on Monday night at Columbia, S.C.

Then Harris and the top-ranked Gamecocks won -- and her attitude and emotions changed quickly.

"Yes, this feels pretty good," she said with a grin. "My mind kind of changed,"

Harris had 19 points, Aliyah Boston dominated underneath and South Carolina held UConn to a record-low two points in the opening quarter on the way to a 70-52 victory Monday night -- its first-ever victory over the fifth-ranked Huskies.

Harris, a senior who was a freshman starter on South Carolina's national championship team in 2017, was 0-4 in her career against the Huskies (20-3). When the game ended, she thought about all the former Gamecocks who'd never celebrated a victory in eight previous games over UConn.

"I see all the people who started before us, people who hadn't beat UConn and I see how happy they are," Harris said.

Things could get even happier before this season is over. It was South Carolina's 17th consecutive victory and their ninth victory in 10 games against ranked opponents.

So are the Gamecocks the clear-cut favorite for another national crown?

The Gamecocks (23-1) came in 0-8 all-time against UConn, seven of those defeats with national championship Coach Dawn Staley in charge.

But South Carolina took control immediately with its suffocating defense, limiting the Huskies to 1-of-16 shooting to lead 11-2 at the end of the first quarter.

Since women's basketball changed to quarters in 2015-16, UConn's fewest points in a first quarter was 8 against Tulane in February 2016. The Huskies' fewest in any quarter was 6 in a loss to Baylor earlier this year.

Boston, a 6-foot-5 freshman, finished with 13 points and 12 rebounds, her 10th double-double this season. She also had three of South Carolina's eight steals and made her first three-pointer this season.

She had 9 rebounds and 2 blocks the first 10 minutes as she continually altered shots whenever the Huskies tried to come inside.

UConn Coach Geno Auriemma said his team's awful first quarter put them on their heels. He thought the Gamecocks sped up his young team, changing shots, defending hard on the perimeter and taking them out of rhythm.

"If things don't go right early on, it's hard to right the ship," Auriemma said.

South Carolina eventually grew the lead to 52-31 early in the second half. UConn cut things to 11 points on Crystal Dangerfield's jumper to start the fourth quarter. But Boston hit a basket and Mikiah Herbert Harrigan made a three to build back South Carolina's lead.

Harris had a double-double, too, with a game-high 11 assists. Zia Cooke, another freshman, had 15 points for the Gamecocks.

The Huskies (20-3) have been a thorn in Staley's side as she's built the Gamecocks into a championship program the past 12 years.

It was UConn who ended South Carolina's last run at No. 1 with an 87-62 victory in 2015. And despite Staley's success -- she's led the team to four Southeastern Conference crowns and the 2017 national championship -- she acknowledged it "absolutely" bothered her not to beat the signature program in women's hoops.

"I'm happy our team won, for a lot of reasons," Staley said.

Dangerfield led the Huskies with a career-high 28 points. Christyn Williams (Central Arkansas Christian) had 2 points on 1-of-11 shooting from the field.

It was the second consecutive week the Huskies lost a highly regarded showcase game, falling 74-56 at home to No. 3 Oregon last Monday.

The Huskies' time among the top five in the rankings, which dates back to 2007, could be in jeopardy after this defeat. UConn slipped a spot in the rankings this week and should slide some more when the next vote is taken. 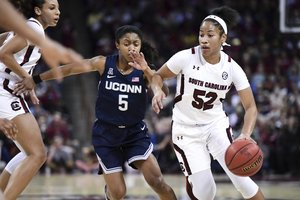 Photo by AP/Sean Rayford
South Carolina guard Tyasha Harris (52) scored 19 points Monday night to held lead the No. 1-ranked Gamecocks to a 70-52 victory over No. 5 Connecticut