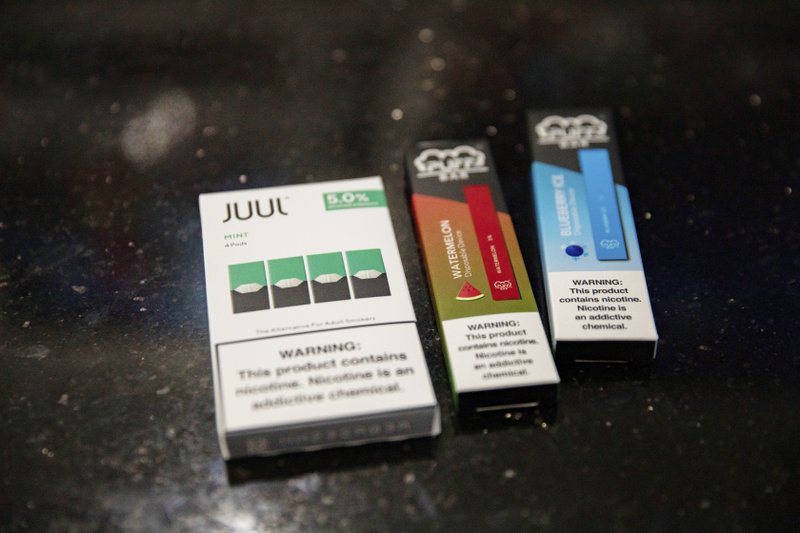 This Jan. 31, 2020 photo shows mint Juul pods next to Puff Bar flavored disposable vape devices at a store in the Brooklyn borough of New York. On Thursday, Feb. 6, 2020, the U.S. government began enforcing restrictions on flavored electronic cigarettes&#xa0;aimed at curbing underage vaping. But parents, researchers and students warn that some young people have already moved on to a newer kind of vape that isn't covered by the flavor ban - disposables. (AP Photo/Marshall Ritzel)

The federal ban on some types of flavored vaping products has led to increased use among teenagers in other devices that weren't affected by the ban, the director of the state Department of Health told lawmakers on Monday.

The federal Food and Drug Administration last month prohibited the sale of pre-filled cartridge-based electronic cigarettes, such as those made by Juul Labs, in flavors other than tobacco and menthol.

That ban, however, doesn't apply to similar, disposable devices, including some that are brightly colored, or to liquid that can be purchased separately and used to fill empty Juul cartridges or other devices.

"A lot of the kids have moved to these products now that are disposable," Health Department Secretary Nate Smith told the state House and Senate committees on Public Health, Welfare and Labor.

The appeal to children of the refillable devices, meanwhile, is particularly concerning because they "may actually be more dangerous than the Juul products," he said.

Smith addressed the committees to provide an update on the rise of vaping among teenagers and outbreak last year of acute lung illnesses associated with the use of the devices.

The illnesses were linked to vitamin E oil and other substances used as an additive in vaping oil, often along with THC, the main psychoactive chemical in marijuana.

Most of the cases involved "open-system" products allowing users to add their own ingredients that weren't affected by the FDA's ban on flavors, Appathurai Balamurugan, the Health Department's chronic-disease director, said.

Responding to a question from Sen. Missy Irvin, R-Mountain View, chairwoman of the Senate committee, he said a few states, including New Jersey, Illinois and Iowa, are considering banning open-system products. Juul has said its products don't contain vitamin E.

The identification of the likely culprit has led to a drop in new cases of acute lung illness associated with vaping, Smith said.

After peaking in September, the nationwide number of new cases has fallen from about 200 per week to about two per week, he said.

In Arkansas, 23 people were hospitalized last year with such illnesses. So far this year, no cases have been reported in the state.

But Smith said cases of chronic illness linked to vaping have been reported, and much remains unknown about the longer-term effects of vaping.

Meanwhile, the use of such products among teenagers has been increasing. In a 2018 survey commissioned by the state, more than 44% of 12th graders said they had used an e-cigarette at least once and 32% said they were current users.

Congress in December increased the minimum age for purchasing vaping products from 18 to 21.

Sen. Trent Garner, R-El Dorado, said he fears that excessive taxing or regulation of "normal, regulated" vaping products will drive people toward more dangerous substances and devices "that you can buy off the street."

Smith responded that the ingredients in vaping liquid are not regulated and that new products are "being released all the time with different flavorings, different compounds."