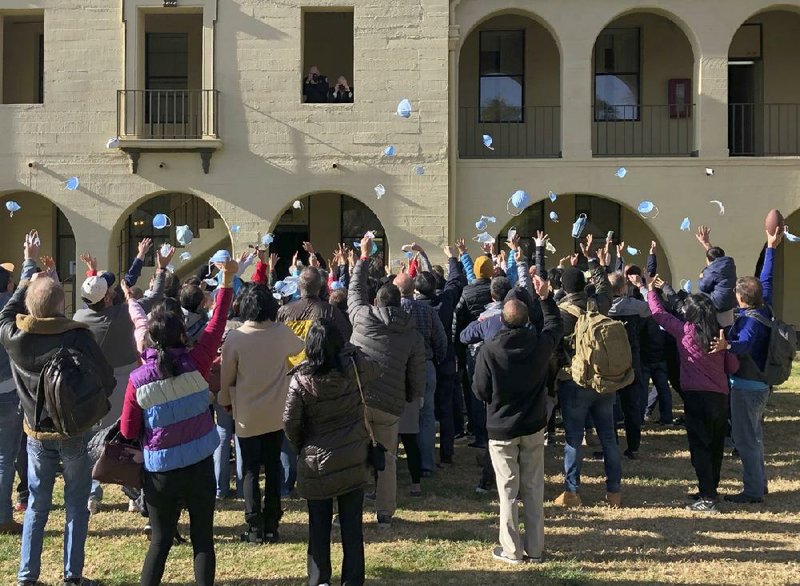 Americans who were flown out of China two weeks ago toss their protective masks into the air Tuesday after they were cleared to leave March Air Reserve Base in Riverside, Calif. More photos at arkansasonline.com/212virus/. (AP/Riverside University Health System-Public Health/Jose Arballo Jr.)

RIVERSIDE, Calif. -- A group of 195 U.S. evacuees was cleared Tuesday to end a two-week quarantine at a Southern California military base after flying out of China during a deadly viral outbreak, officials said.

Meanwhile in Geneva, Tedros Adhanom Ghebreyesus, director-general of the World Health Organization, announced a new name for the disease caused by the virus -- covid-19 -- saying officials wanted to avoid stigmatizing any geographic location, group of people or animal that might be linked to the disease and to make clear that it was a new coronavirus discovered in 2019.

"Having a name matters to prevent the use of other names that can be inaccurate or stigmatizing. It also gives us a standard format to use for any future coronavirus outbreaks," Ghebreyesus said, adding that the name was agreed upon by officials at WHO, the World Organization for Animal Health and the Food and Agriculture Organization.

[Video not showing up above? Click here to watch » https://www.youtube.com/watch?v=ndAeCFMO1oI]

"It will be like HIV and AIDS -- different names for virus and disease," said Benjamin Neuman, a virologist at Texas A&M University-Texarkana.

After everyone at March Air Reserve Base in California passed their final health screenings, they threw their face masks into the air and hugged, said Dr. Nancy Knight of the U.S. Centers for Disease Control and Prevention.

"These individuals have completed their quarantine. They pose no health risk to themselves, to their families, to their places of work, to schools or their communities," she said. "There should be no concern about novel coronavirus from these 195 individuals. They have been watched more closely than anyone else in the United States."

The group, which includes U.S. consular officials and children, arrived Jan. 29 on a U.S.-chartered flight that whisked them out of the heart of the viral outbreak in the Chinese city of Wuhan. The locked-down city of 11 million is the epicenter of the virus that has claimed more than 1,000 lives worldwide.

The 195 were the first evacuees to arrive in the United States and none of them tested positive for the illness. Most of the group cleared Tuesday was planning to leave immediately, though some will remain one more day because of travel arrangements. They are headed to see family members across the United States and health officials urged the public to welcome them. Public-health officials denounced incidents of discrimination reported in the Riverside, Calif., area against military personnel who work at the base.

Knight said the daughter of a woman who works at the base was called names at school. Another base employee was denied housing because she worked there.

"They don't need additional testing. They don't need to be shunned," said Dr. Cameron Kaiser, public-health officer for Riverside County. "Our work here is done and these people are going home and I expect every single one of us to let them."

The FBI and Los Angeles County sheriff's office are investigating the online posting of a fake document last month asserting the novel coronavirus was detected in the city of Carson, Calif. The realistic-looking document had the official logos of the Los Angeles County Public Health Department, the CDC and the World Health Organization, and has been strongly denounced by officials.

There have been 13 confirmed cases in the United States, including seven in California. More than 460 cases have been confirmed outside mainland China. Of those, 174 people are quarantined aboard a cruise ship in Yokohama, Japan, near Tokyo.

Hubei, the province at the center of the coronavirus outbreak, disclosed an additional 94 deaths for Tuesday, raising the number of fatalities worldwide to at least 1,112. Of those, 1,068 deaths have occurred in Hubei.

Hundreds of U.S. evacuees in the past two weeks were flown to military bases in California, Texas and Nebraska and remain under quarantine.

One person is in isolation at a hospital near San Diego after testing positive. That person and three other evacuees had been in hospital isolation after showing symptoms of the virus but on Sunday, federal health officials said they had tested negative and they were sent back to the base, where they joined more than 200 people.

On Monday, however, the CDC informed county health officials that further testing revealed that one of the four patients tested positive and was sent back to the hospital.

Beijing on Tuesday urged countries that have enacted travel restrictions aimed at curbing the outbreak to restore normal ties for the sake of the global economy.

In the United States, Federal Reserve Chairman Jerome Powell told Congress that he does not see any signs of a recession on the horizon and that he expects growth to remain solid, although he said the coronavirus is a major unknown for the economy.

The U.S. economy is heavily driven by consumer spending, which remains healthy. Other economies are more dependent on trade, which is starting to be affected by the shutdown of many factories in China.

In China, authorities in the virus-hit city of Wuhan have announced fresh restrictions, making millions of people virtual prisoners in their own homes. Officials there are allowing just one member of a household to go on one shopping trip every three days and placing entire buildings under quarantine.

Two provincial health bosses have been fired as the Communist Party struggles to contain anger over the spread of the virus.

Chinese officials also highlighted the role of clusters, which they defined as two or more infections within a relatively small area, in accelerating the disease's spread.

Wu Zunyou, the chief epidemiologist of China's disease control agency, said at a news conference Tuesday that there had been nearly 1,000 clusters in China, with 83% occurring within families. But schools, factories, shopping centers and medical facilities also contributed to the spread, he said.

But as the outbreak's toll has mushroomed, it has become clear how easily the virus can be transmitted and how hard it may be to contain, even in communities around the world that are far removed from Wuhan. Many of the people infected had not even been there.

In Tianjin, China, authorities ordered more than 10,000 people into quarantine, after they traced one-third of cases in the city to a single department store.

In Hong Kong on Tuesday, dozens of residents were evacuated from their apartment building overnight, as two people living 10 floors apart were found to be infected. Officials said an unsealed pipe might be to blame.

Also in Hong Kong, the U.S. State Department triggered authorized departure of nonessential U.S. personnel and their families, as concerns grow over the outbreak.

The policy provides employees and their families "the option to depart if they wish," a State Department spokesman said in a statement. "Departure is not required."

And in Britain on Tuesday, a businessman who is believed to be the source of 10 other cases in Britain and France said that he showed no symptoms before testing positive for the coronavirus.

Meanwhile, postal operators in the United States, China, Singapore and elsewhere said the suspension of flights to slow the virus spread was having a major impact on the global flow of letters and parcels.

The U.S. Postal Service informed its counterparts around the world Tuesday that it was "experiencing significant difficulties" in dispatching letters, parcels and express mail to China, including Hong Kong and Macau, because airlines have suspended flights to those destinations.

It said in the note that "until sufficient transport capacity becomes available," it would no longer accept mail from other countries that transits through the Postal Service to China, Hong Kong and Macau. That would start immediately, the note said. The Postal Service told said that the hiatus affected only transit mail and not letters and parcels posted in the United States.

The Universal Postal Union, a U.N. agency for postal cooperation between its 192-member countries, said the flight suspensions would affect mail delivery "for the foreseeable future."

The Chinese mail service, China Post, said it was disinfecting postal offices, processing centers and vehicles to ensure the virus doesn't spread through the mail and to protect postal workers.

The virus does "not survive for long on objects. It is therefore safe to receive postal items from China," the Chinese agency said. 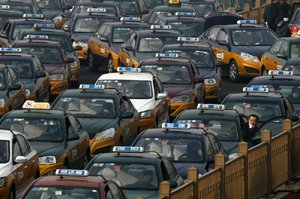 Taxis wait for customers Tuesday at the train station in Beijing. Chinese officials urged countries that have enacted travel restrictions because of the coronavirus outbreak to restore normal ties for the sake of the global economy. (AP/Andy Wong) 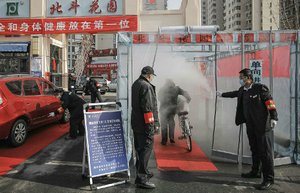 People pass through a disinfectant station Tuesday as they return home to a residential complex in Tianjin, China, where authorities ordered that more than 10,000 people be quarantined after a third of the city’s cases were traced to a single department store. (AP/Chinatopix) 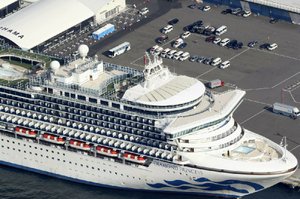 The Diamond Princess cruise ship remains in quarantine today in Yokohama, Japan, with at least 174 confirmed cases of the coronavirus aboard. (AP/Kyodo News)