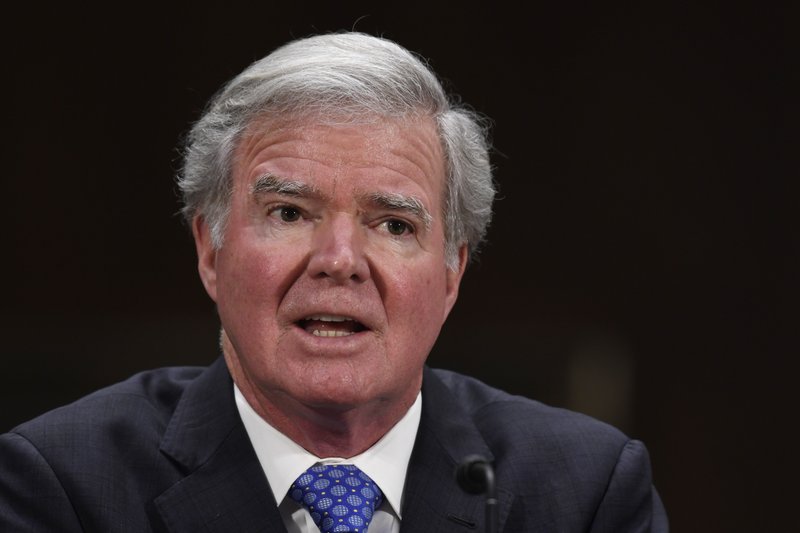 The NCAA last fall said it would allow players to "benefit" from the use of their name, image and likeness and is working on new rules it plans to reveal in April. Under the NCAA's timeline, athletes would be able to take advantage of endorsement opportunities beginning next January.

Meanwhile, more than 25 states are considering legislation that would force the NCAA to allow players to earn money off their personal brand in a bid to address inequities in the multi-billion-dollar college sports industry. California passed a law last year that gives broad endorsement rights to players and it will take effect in 2023. Other states could grant those rights as soon as this year.

The NCAA's concern, echoed by Big 12 Commissioner Bob Bowlsby, who also testified Tuesday, is that endorsement deals for athletes would have a negative effect on recruiting, with schools and boosters in states with athlete-friendly laws using money to entice players to sign with certain schools.

"If implemented, these laws would give some schools an unfair recruiting advantage and open the door to sponsorship arrangements being used as a recruiting inducement. This would create a huge imbalance among schools and could lead to corruption in the recruiting process," Emmert said. "We may need Congress' support in helping maintain uniform standards in college sports."

Emmert's comments were similar to what the NCAA, the Big 12 and the Atlantic Coast Conference have been communicating to Congress through well-paid lobbyists. The Associated Press has found that the NCAA and the two conferences spent $750,000 last year lobbying on Capitol Hill, in part to amplify their concern that "guardrails" are needed on endorsement pay for athletes to avoid destroying college sports as we know it.

Sen. Jerry Moran, R-Kan., the chairman of the Subcommittee on Manufacturing, Trade, and Consumer Protection, said he was not inclined to act until after the NCAA reveals its new rules.

"I wish Congress was in a position to be able to provide the NCAA and the athletes the opportunity to find a solution. ... The ability for Congress to do that is, that's a challenge," Moran said after the hearing. "The next step is to see what the NCAA is capable of presenting to us in April."

"The power conferences have advantages and they consistently pull the best recruits," Huma said. "They will continue to get the recruits. The reality is, you're not going to change the recruiting by limiting the players' opportunities."

Huma said once states start granting players endorsement rights, Congress would not be inclined to take those rights away, "and we'll have an opportunity to witness the fact that NCAA sports will still be strong and everybody will tune in."

There was bipartisan agreement among the senators at the hearing that athletes should have access to endorsement opportunities and that some regulations are necessary.

Emmert did not fully escape lawmakers' anger at the system he presides over.

Sen. Marsha Blackburn, R-Tenn., excoriated Emmert for the NCAA's handling of sexual violence against women. She also noted the case of James Wiseman, a top NBA prospect who left school after he was suspended over $11,500 given to his mother by Memphis Coach Penny Hardaway to help with moving expenses. Hardaway gave the money before he was Memphis' coach.

Blackburn said the NCAA's lack of consistency and transparency in the Wiseman case had eroded trust in the organization's ability to handle issues of player benefits.

"I think a question that must be going through a lot of minds of student-athletes and their parents is, how in the world are they going to be able to trust you to get this right?" Blackburn said.