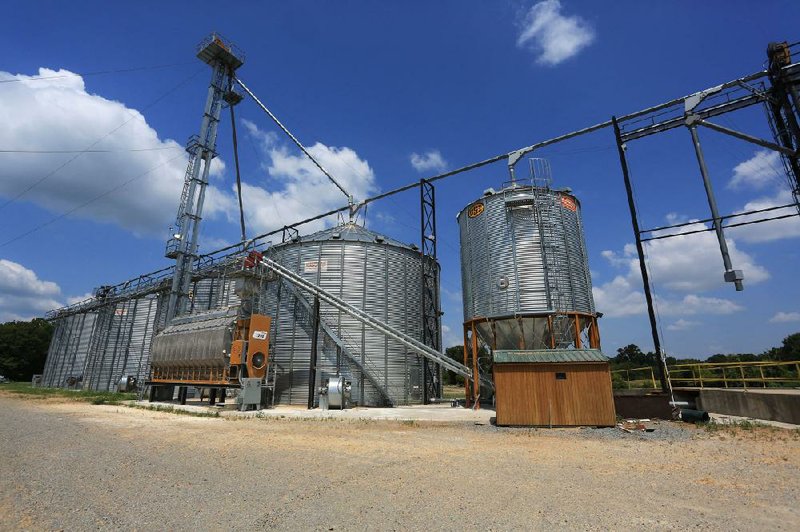 FILE — The Turner Grain storage facility near Brinkley was shut down in 2014 by U.S. Department of Agriculture agents when they found no grain inside despite documents indicating otherwise.

LONOKE -- Nearly 311,000 bushels of rice constituted 80% of a farm family's 2013 crop for which they never got paid, a farmer testified Tuesday in a trial related to the 2014 closing of Turner Grain Merchandising.

The rice was shipped from Zero Grade Farms in Lonoke County to a Mississippi River port near West Memphis, where it was loaded onto barges for export, Mark Isbell, one of the five principals in Zero Grade Farms, said.

The rice was from the farm's 2013 crop and was held in storage until June 27, 2014, when Zero Grade and Turner Grain co-founder Jason Coleman struck a deal, Isbell said. Holding rice from one season to another is common among farmers, especially those with storage bins, he said.

Turner Grain Merchandising was closed Aug. 12, 2014, by federal regulators after they found no grain in bins certified as being full. The Brinkley grain company filed for bankruptcy about two months later, listing about $14 million in assets and $47 million in debts.

Zero Grade is among several Lonoke County farming entities that have sued other Turner Grain entities, KBX Inc., a grain broker in Benton, and principals of both companies in Lonoke County Circuit Court.

The trial opened Jan. 31 with jury selection and is scheduled to last through Feb. 28. The farms have identified a cumulative $5.4 million in grain for which they were never paid but seek an unspecified amount in compensatory and punitive damages.

Isbell said Zero Grade had never done business before with Turner Grain or KBX until 2014. Zero Grade and the other plaintiffs contend that Turner Grain was an agent of KBX, and that KBX was the ultimate buyer of the grain.

With Turner Grain closing, or on the cusp of it, Isbell said he drove to KBX's office to get a check but was rebuffed. A $304,575 check from Turner Grain a short time before that visit was returned for insufficient funds, he said. (KBX lawyers have noted during the trial that KBX also received a bad check from Turner in its closing days.)

Isbell went to KBX because shipping documents at the West Memphis port identified KBX as the buyer of the rice, which also was being loaded onto KBX barges.

On cross-examination by Scott Poynter, an attorney for KBX, Isbell acknowledged that Zero Grade Farms sought relief from the U.S. Department of Agriculture's Farm Service Agency for a loan payment that was coming due. Isbell said farmers across Arkansas and other states affected by Turner Grain's collapse sought, and received, temporary relief from the USDA.

Isbell also acknowledged that documents between Zero Grade and the Farm Service Agency's office in Lonoke identified Turner Grain as the buyer of the rice, not KBX.

Also Tuesday, the jury watched about 20 minutes of a videotaped deposition of the late Jason Coleman, a co-founder of Turner Grain.

Coleman, who died early last year, said in the deposition that Turner Grain routinely would use profits from corn contracts to subsidize its offers to farmers for their rice, with per-bushel prices higher than what other merchandisers and brokers were offering.

In the deposition, Coleman also acknowledged sending text messages to KBX officials asking for payments, but some of those were in 2013, well before talk of Turner Grain's problems began circulating through the farming community.

"I agree it's wrong they didn't get paid," Coleman said on cross-examination during that deposition but added he didn't believe KBX was one of the parties that owed the money.

Nicholas Watts, a broker for Archer Daniels Midland at the time of Turner Grain's troubles, said in another videotaped deposition shown to the jury that the Turner Grain business plan of offering above-market prices for rice wasn't sustainable.

An email from within Archer Daniels Midland said of Turner: "Their largest presence has been in paddy rice. Over the past couple of years, they have stood out bidding unrealistic fob [freight on board] bids and apparently the inevitability of their paying more than they were selling [for] has caught up with them."