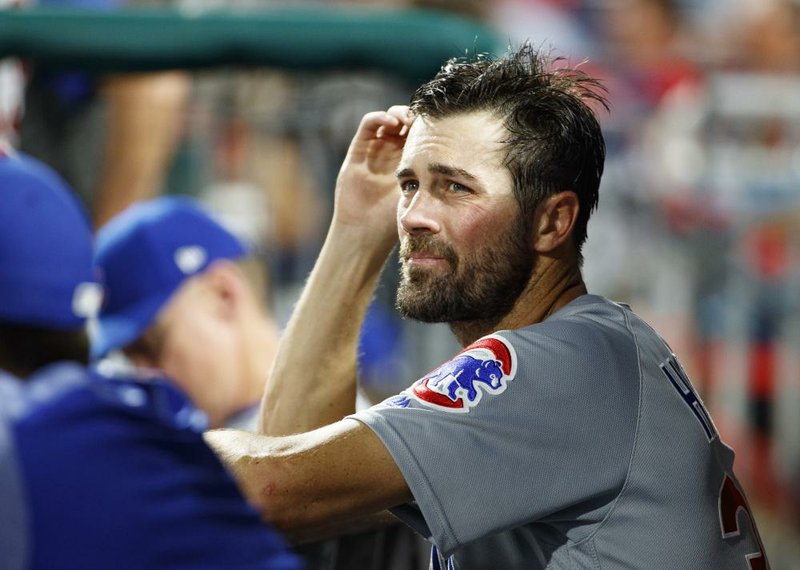 Former Chicago Cubs starting pitcher Cole Hamels reacts as he is pulled during the third inning of a baseball game against the Philadelphia Phillies, Wednesday, Aug. 14, 2019, in Philadelphia. (AP Photo/Chris Szagola)

Left-hander Cole Hamels is eager to fill the void as pitchers and catchers report to spring training today.

Hamels wants to be a resource for the young starters. He remembers such veterans as Roy Halladay set the example for him when he broke into the major leagues with Philadelphia in 2006.

"When I came up I was very fortunate to have an organization that looked into what veteran leadership is," Hamels said last month. "They surrounded me with some of the best players and pitchers that I could ever been around.

"Roy Halladay, [Roy] Oswalt, Cliff Lee (Benton/Arkansas Razorbacks], Jamie Moyer, those are great guys to learn from and I think it helped me elevate my game and become a better pitcher."

Hamels has 163 victories in 14 seasons with the Phillies, Texas Rangers and Chicago Cubs.

Almost every starting pitcher in camp is much younger than Hamels.

Felix Hernandez, the former Seattle standout who will be in camp on a minor league contract as he tries to revive his career, also can be a role model for young pitchers. Hernandez, who turns 34 in April, may compete with Sean Newcomb and rookie right-handers Kyle Wright, Ian Anderson and Bryse Wilson for the No. 5 spot in the rotation.

"You can't see it all in this game, but they've come pretty close to seeing it all," Anderson said of Hamels and Hernández.

Hamels should be especially helpful for Fried and Newcomb, left-handers who say they can't wait to watch the veteran work. Fried said Hamels "is the person I'm most frequently compared to."

"Obviously, one of his biggest weapons is one I've been working on for a long time, so I'm excited to pick his brain on the change-up," Fried said.

Hamels said it's only fair that he share knowledge from his long career. After all, he said he picked up tips about pitching mechanics as a kid by watching former longtime Braves left-hander Tom Glavine, another master of the change-up, when most Atlanta games were being televised.

"He was somebody I really looked at and wanted to have some similarities," Hamels said of Glavine. "The change-up was a pitch I knew the importance of. It's helped me to this day. ... I tried to emulate his mechanics a little bit."

Hamels said he rushed his return from an oblique injury last season and won't make that mistake again. That's only one of many lessons he said he's eager to share because "I know where I'm at" as a veteran.

"I think that ... I'm hopefully able to introduce some of the experiences I have, what's really gotten me to where I am today and see if guys can learn from some of the advice that I have," Hamels said.

Pitchers and catchers will have their first workout on Thursday at the Braves' new spring training home in North Port, Fla.

Position players report Monday, and the first full-squad workout is next Tuesday.