Hotel lot makes do for ASU 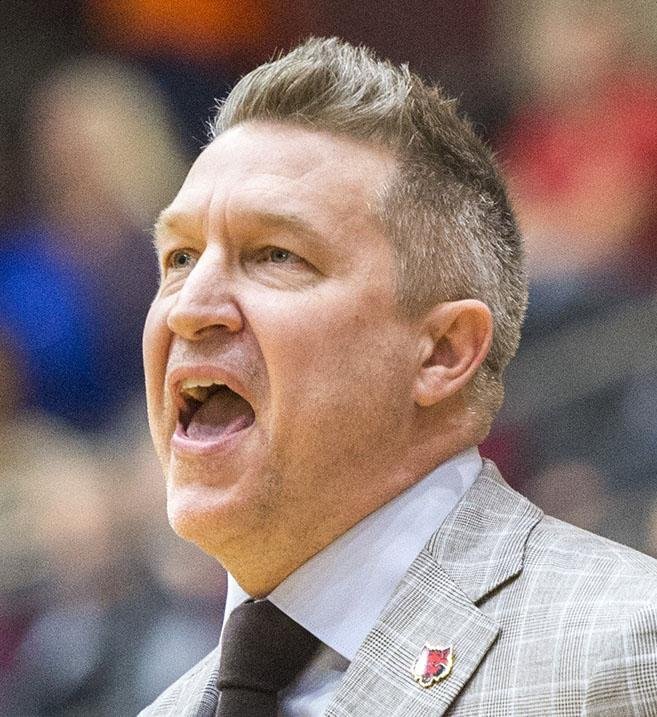 In this file photo ASU head coach Matt Daniel is shown during a game at the Jack Stephens Center in Little Rock on January 18, 2020. (Arkansas Democrat-Gazette/Jeff Gammons)

Playing on the road can be full of surprises. The Arkansas State University women's basketball team got a taste of that during last week's road trip in Georgia.

Prior to the Red Wolves' Saturday game at Georgia Southern in Statesboro, the team was to practice at the Eagles' arena, Hanner Fieldhouse, at 4:30 p.m. Friday. But the court ended up being unavailable during that time for ASU.

"The opposing team was still using it, and we have an itinerary to keep, so we tried to make the best of the situation we could," ASU Coach Matt Daniel said Tuesday.

Daniel knew the Red Wolves still needed to prepare for the game the following day, so he had his team conduct a walk-through practice in the parking lot in the back of the team hotel.

The team's Twitter account posted photos from the unusual practice Friday evening. Daniel was pictured leading the Red Wolves, who were in full practice gear, in the parking lot of a Holiday Inn, with an adjacent Chili's restaurant in the background.

Daniel said it wasn't the first time he's held a practice in a parking lot during his career, but it was the first time the arena court hadn't been available at the planned time prior to a game.

"As coaches you have to modify and adjust," Daniel said. "We're just trying to teach the kids to adapt and overcome, and bottom line, no excuses. We have to be at our best to give ourselves a chance to win, and so that's what we did."

University of Arkansas at Little Rock men's Coach Darrell Walker has been known to get pretty lively in the locker room following wins this season.

The team's Twitter account posted videos following victories this season over Missouri State, Louisiana-Monroe and Texas State of Walker doing everything from waving his arms in the air, to jumping into the arms of his ecstatic players, to showing off some rather unorthodox dance moves.

The dancing continued Saturday afternoon after UALR's 90-87 victory over in-state rival Arkansas State at the Jack Stephens Center in Little Rock. This time, Walker posted a video from his personal Twitter account of him, once again, cutting loose in the locker room with his team, much to his players' enjoyment.

"Had to show the young fellas some real moves after a rivalry win," Walker wrote.

Asked Monday about their head coach's dancing, a few Trojans players were amused.

"He dances a little bit better than me," sophomore forward Nikola Maric said with a laugh.

The Trojans (18-7, 12-2 Sun Belt) hold a three-game lead in the conference standings with six regular season games left, and they return to action Thursday night at Texas State (15-10, 8-6).

Collier, a North Little Rock High School product, tallied the 200th steal of her career in the game, which made her just the second player in program history to have 1,000 points, 500 rebounds, 300 assists and 200 steals in her career. Chastity Reed, the Trojans' only WNBA Draft pick, is the only other player to have hit each of those marks in program history.

"To be able to accomplish something like that and be only the second player, as many good players as we've had here, that shows you how outstanding she's been and how hard she's worked at it, how much she's concentrated," UALR Coach Joe Foley said Tuesday. "You don't get those players very often.

"We laugh all the time because she's not near as athletic as some of those kids that we've had, but she's got such a mind for basketball that that's allowed her to accomplish a lot of things."

Since it dipped below .500 in the Southland Conference standings a little more than two weeks ago, a product of a three-game losing streak at the time, the University of Central Arkansas has since recovered to stay in the upper half of the league.

UCA (8-16, 7-6) has won three of its past four games, with victories coming against Southeastern Louisiana, Northwestern (La.) State and, most recently, McNeese State on Saturday in Lake Charles, La. The Bears sit in a three-way tie for fifth in the Southland and are five games back of first place with seven regular-season games left.

UCA hosts New Orleans (7-16, 3-10) at 7 tonight in Conway. New Orleans is tied with Southeastern Louisiana for last place in the league standings.