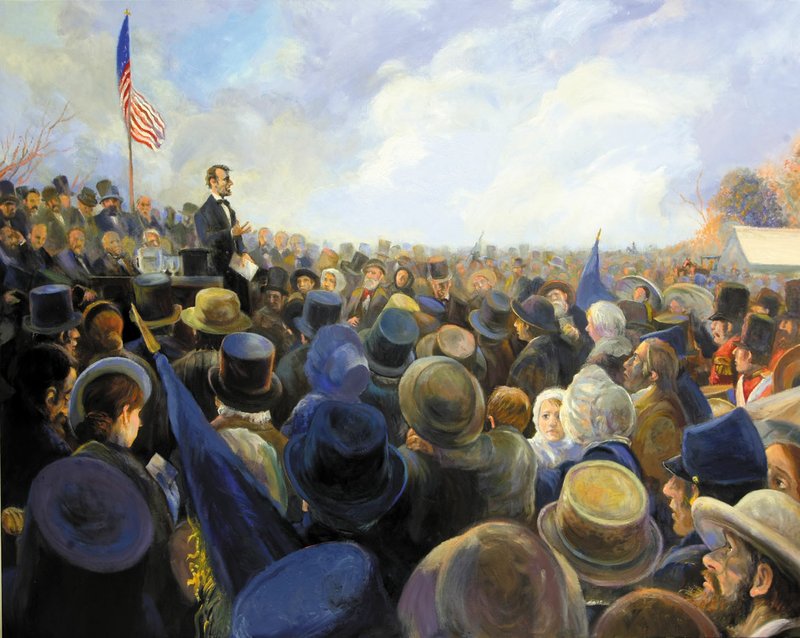 In the spring of 1828, a young man took a boat down the Mississippi River to New Orleans on a job that promised a good payday. He came across a slave auction there and watched with amazement--disgusted amazement--as a "comely mulatto girl" was brought to be sold.

The story goes that she was marched up and down in front of buyers, who pinched her flesh and commented on the way she walked. She was trotted about, like an animal, to see how she moved. The young man from the Midwest seethed.

He got his chance to hit American slavery decades later, in the 1860s. And he hit it hard.

It's easy to think of somebody like Abraham Lincoln as born a fully functioning adult. Don't we do that to G. Washington, too? Except for an early bout with a cherry tree, wasn't the first president always solemn, always with a white powdered wig and a sword?

And wasn't the 16th president always grave, with the weight of the country on his shoulders? Wasn't he always Father Abraham, as he was in the 1865 photograph--the one with the broken glass, which symbolized the state of the Union at the time? Wasn't Abraham Lincoln always consequential, weighty, profound? As if he never really had a youth, but only a preparation.

Nonsense, as are most myths about American heroes.

Two Quaker women were deciding at the beginning of the Civil War who would win. The Confederacy will win, said the first. "Because Jefferson Davis is a praying man."

Said the second in response: "But Abraham Lincoln is a praying man, too."

"Yes, but the Lord might think Abraham is joking."

That was one of Abraham Lincoln's many stories. And, you'll note, it was woven together during the greatest crisis of this nation's history. If he was depressed, he also seemed to love fun and funny stories. If he was an unschooled man, he was also well-read. He didn't want war, but oversaw the bloodiest war in American history. By the score, he pardoned boys scheduled to be executed for desertion ("What good would it do him?"), but kept only those generals that pushed the matters through on the bloody battlefields all over the east.

Abraham Lincoln was skinny. But skilled with an axe. He was homely. But went into politics. He was a brilliant debater. And lost election after election. That is, until he became president of the United States of America. And vowed to keep the nation together. And did.

He had something else, too, something instinctive, visceral and marrow deep: an abiding hatred and detestation of human slavery.

Other Americans disliked slavery, sure. Some knew it was evil. But many were willing to accept it as a necessary evil. It's the economy, stupid. What evils mankind will put up with to get 5 percent growth.

Still others would have destroyed anything to stop slavery, including the Union. But Abe Lincoln was no abolitionist in that sense. With him, ending slavery was a moral necessity, but so was saving the United States of America. Somehow, against all odds and the conventional wisdom of his day, Mr. Lincoln accomplished both goals. He once said he didn't live in the times of miracles. But he was mistaken. What else call it when the impossible happens?

Today the kids and commentariat (but we repeat ourselves) like to say how divided this country is, and how we need a uniter and peace and harmony--and that government officials "need to work together for the American people."

Children, gather around, and let us tell you about divided. It happened in this country circa 1861-1865. For all of today's protests outside congressional offices and the insults coming daily from a certain Twitter account, this ain't divided. Not like during Abraham Lincoln's term.

Once upon a time the continuation of this nation was doubtful. And those who'd tear the Union apart were winning. Or at least drawing things out enough to discourage the other side.

No matter what we've heard from certain unreconstructed Confederates over the years, the American Civil War, or just The War as it's known in these latitudes, was indeed about slavery. All one need do is read the correspondence of those who were fighting in it. Or read the declarations of each state in the Confederacy as they voted, one by one, to leave the Union.

Those secession papers are so much more interesting, reliable and honest than some of the books going around today, which create more echo chambers as the writers quote each other. And give each other some sort of paper trail showing how economics and only economics caused The War.

Yes, different regions of the country had different economies. Because one was based on slavery, a peculiar institution as American as apple pie, motherhood and violence.

Then the most unlikely of American politicians showed up. And finally won an election.

THE MAN whose birthday we celebrate today wasn't always as popular as he is now. Even before he took office, half the country wouldn't have him. The congressmen who mentioned him in debates--that is, those congressmen who stayed in the Union--treated him with contempt. The papers would make modern editorialists blush. ("Filthy story-teller, despot, liar, thief, braggart, buffoon, usurper, monster, ignoramus Abe, old scoundrel, perjurer, swindler, tyrant, field-butcher, land-pirate."--Harper's Weekly magazine.)

Worse, his generals wouldn't fight. He courted them, waited on them, praised them, pushed them, re-assigned them, badgered them and fired them. ("If McClellan is not using the army, I should like to borrow it for a while.")

Eventually Lincoln would find his Grant. But it would take several bloody years. In which the president's standing with the American people kept falling. Months before the November 1864 election, he told friends he had no hope of winning.

But he held firm. And held the Union firm. With the firmness in the right that God gave him to see the right, and finished off the peculiar institution. And was shot dead for it.

In the end, Abraham Lincoln would manage to win the most decisive battle of all, the one for public opinion. And has managed to leap to the top of most lists of Great American Presidents.

In great part because of Abraham Lincoln, this country is still one, under God, indivisible. And this editorial of Feb. 12, 2020, is being written in a free country, specifically in Arkansas, U.S.A.--not C.S.A.