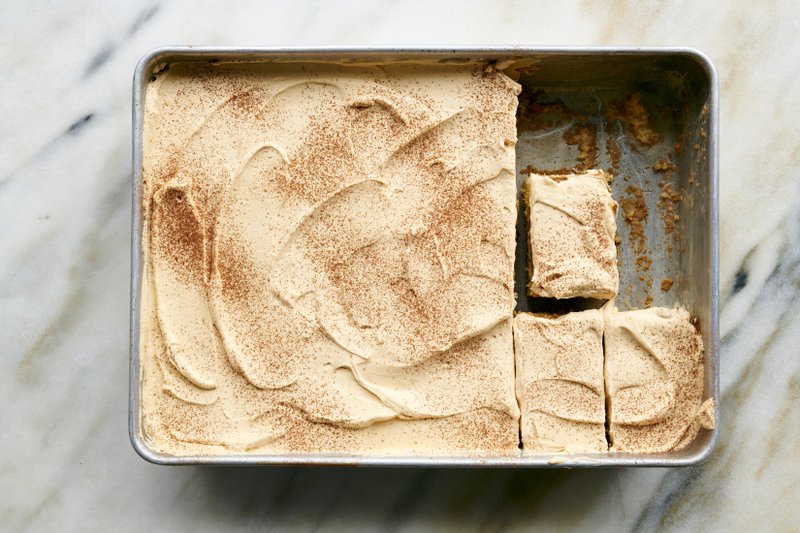 There are those who think that less is more. But I like to think that more is more, at least when it comes to the milky syrup of a tres leches cake.

I sampled my first pastel de tres leches at a Cuban restaurant in Miami. The spongy yellow square began oozing at the slightest touch of my fork before I even plunged it in. Saturated in an elixir of sweetened condensed milk, evaporated milk and cream flavored with cinnamon and rum, it walked the line between pudding and cake. Being an ardent admirer of both, I fell head over heels, devouring my slice, then counting down the hours until the next meal when I could order another. 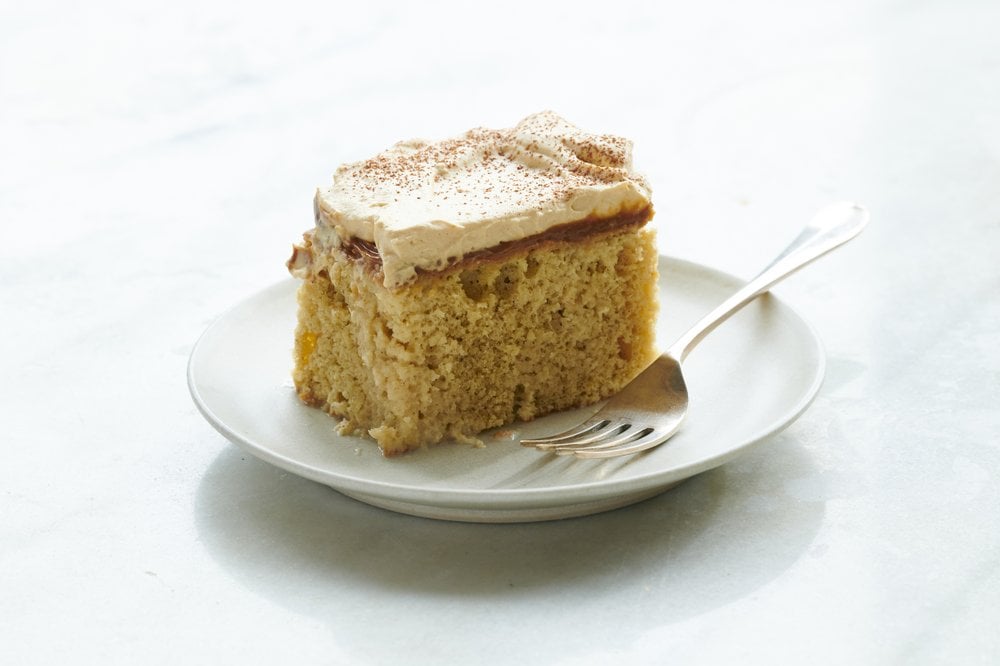 Most tres leches cake recipes stay pretty close to the version popularized in the early 20th century, printed on the back label of the milk

can, with one major twist. Instead of stopping at the usual three milks, I stir in three more.

I simmer regular coconut milk and condensed coconut milk into the syrup to add a complex flavor and silky texture. Then, I spread dulce de leche on the surface of the cake, and whip more into the creamy topping, giving it the taste and texture of caramel mousse — without the work of having to make an actual caramel. 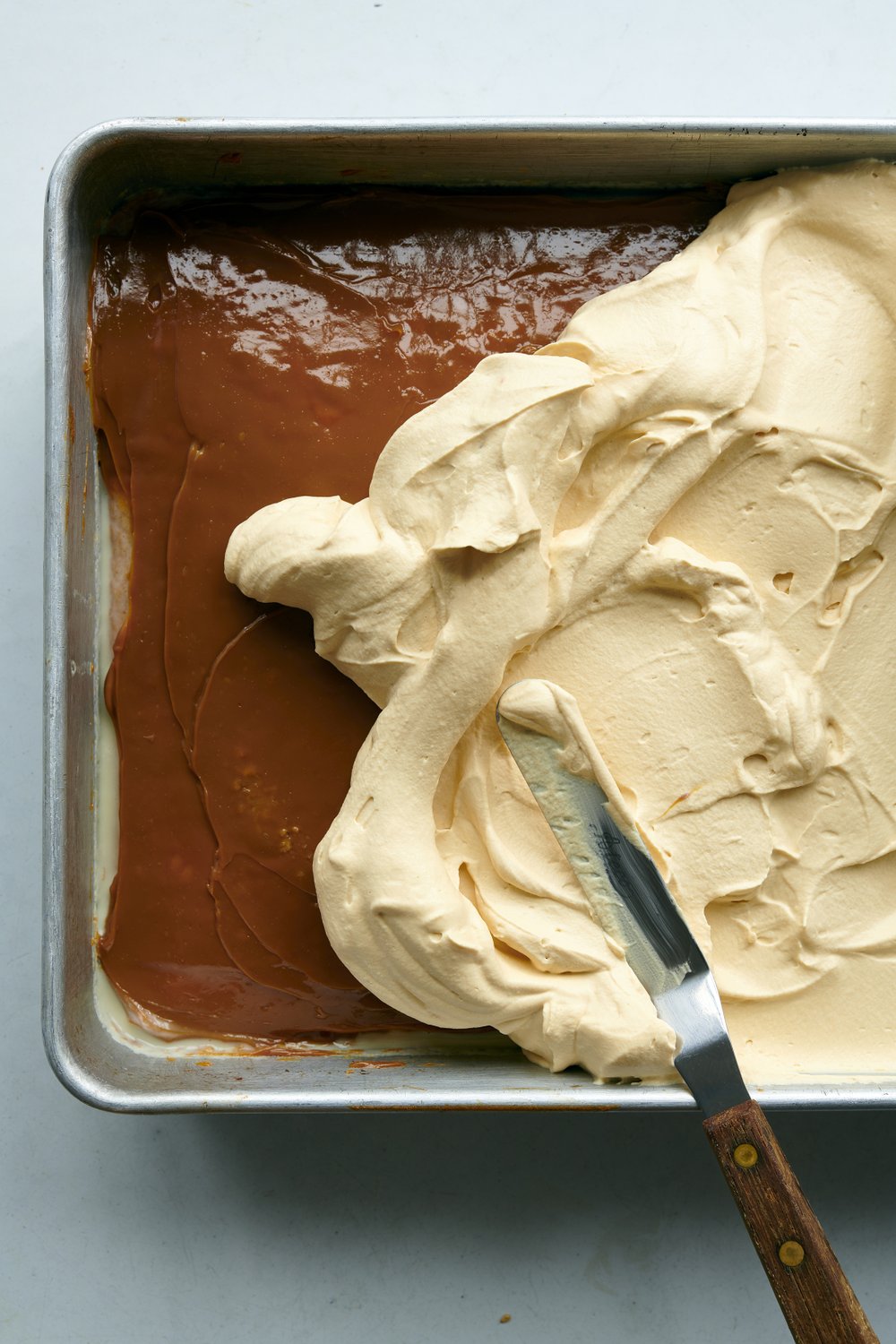 Dulce de leche is spread onto the surface of a seis leches cake, and whipped into the creamy topping, giving the cake a taste and texture of caramel mousse. (The New York Times/David Malosh)

There is one potential downside to my version: To make room in the cake pan for the coconut milks, I had to cut back on the others. Instead of using the whole can of sweetened condensed milk, you'll have a little left over.

Because I like eating sweetened condensed milk straight from the can, I have no problem disposing of the excess. But there are other, less cloying options, like saving the milk for the next time you crave Thai iced tea or dirty horchata. It will keep in the refrigerator for two weeks or in the freezer for three months.

If you've never made tres leches cake, you might be surprised by what looks like a lake in the pan after you pour in the milk syrup. Have faith. It will be absorbed by the sponge cake, whose main purpose is to serve as a vehicle for that syrup. And if there's still a little liquid left when you serve the cake, just spoon it on top. Or lap it up when no one is looking. Being a more-is-more person, I might have done that myself.

In a medium bowl, whisk together the flour, ¾ cup of the sugar, the baking powder, cinnamon, nutmeg and ¼ teaspoon salt.

In a large bowl, whisk together the egg yolks, melted butter, milk and vanilla extract.

Using an electric mixer, set on medium speed, beat the egg whites until frothy, about 2 minutes. Add the cream of tartar, and beat until thick, fluffy and white but before peaks form, another 2 to 3 minutes. Add the remaining ¼ cup of sugar, a little at a time, and continue beating until the whites are glossy and firm peaks form when the beaters are lifted, another 3 to 5 minutes.

Bake until the cake is golden and a wooden pick inserted into the center comes out clean, about 25 minutes. Transfer to a wire rack to cool for 20 minutes. 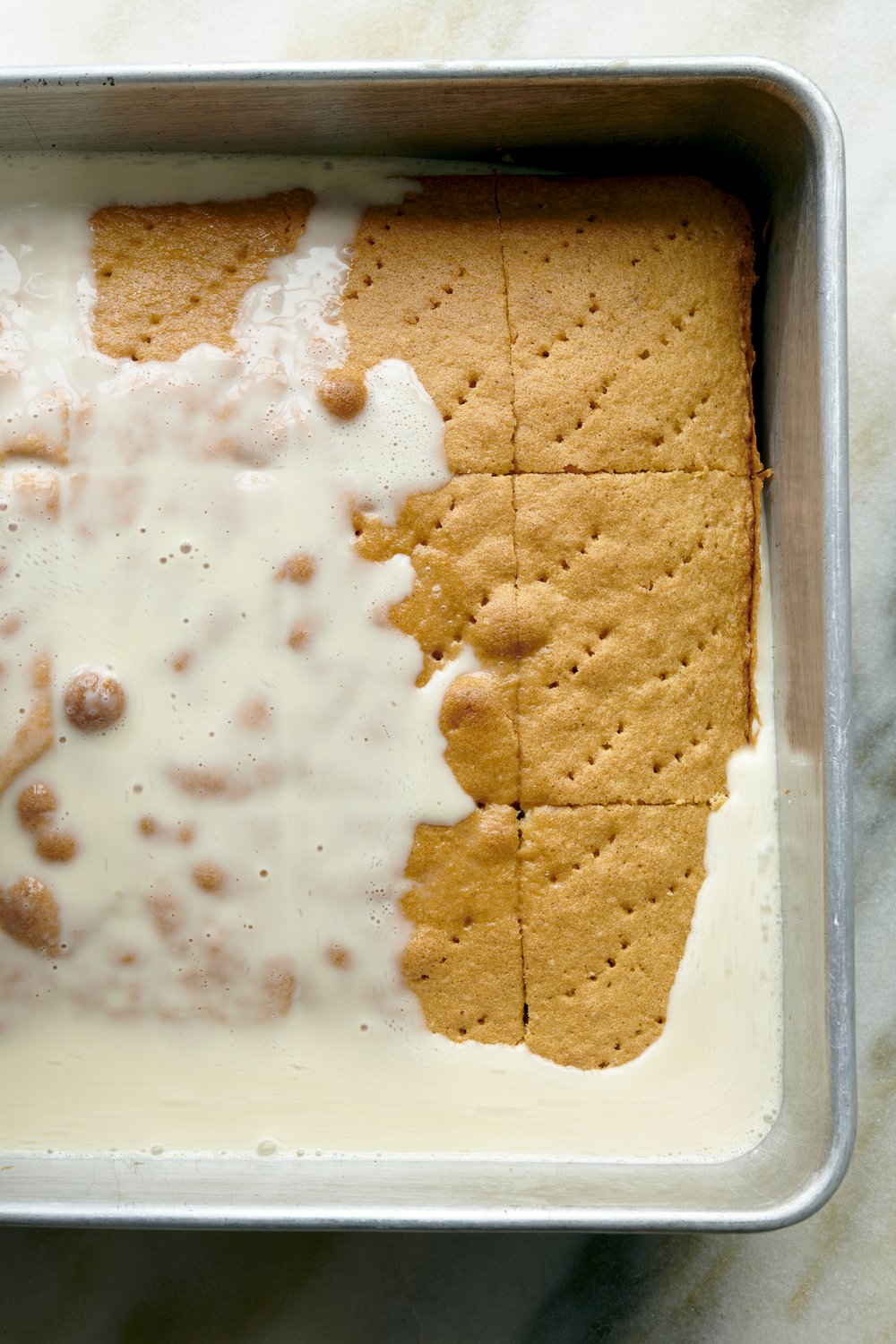 Use a fork to poke holes all over the top of the warm cake, then cut it into 18 pieces but don't take the pieces out of the pan. Pour milk mixture evenly over the cake. Cover and chill cake for at least 8 hours or preferably overnight (or up to 3 days).

No more than 4 hours before serving, spread ¾ cup of the dulce de leche over top of the cake. Whip the cream with the remaining ¼ cup dulce de leche until thick and mousselike. Spread the whipped cream on the cake, and sprinkle with more cinnamon.