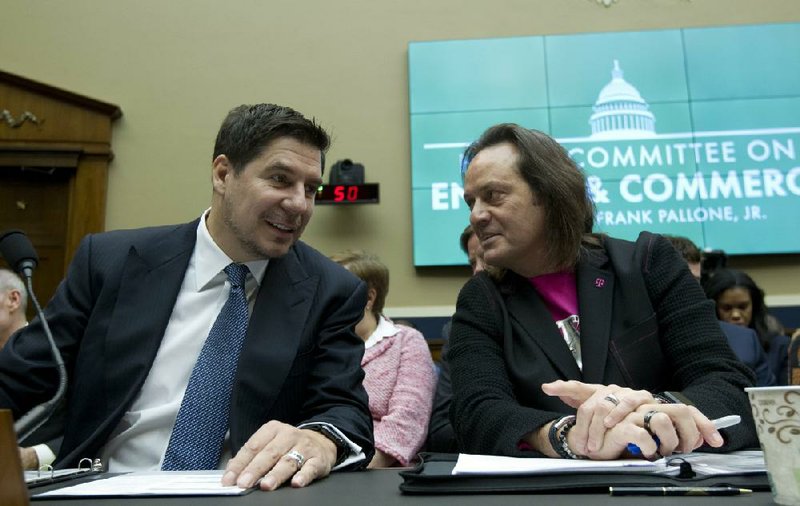 Sprint Executive Chairman Marcelo Claure (left) and John Legere, chief executive of T-Mobile, appear at a House hearing on their companies’ proposed merger in February 2019. The deal, backed by a federal judge on Tuesday, will create a new carrier with more than 100 million users. (AP/Jose Luis Magana)

A federal judge on Tuesday ruled in favor of T-Mobile's takeover of Sprint in a deal that would further concentrate corporate ownership of technology, combining the nation's third- and fourth-largest wireless carriers and creating a new telecommunications giant to take on AT&T and Verizon.

Judge Victor Marrero of the U.S. District Court in Manhattan rejected an unusual challenge led by attorneys general from 13 states and the District of Columbia. The suit was lodged in June after regulators at the Department of Justice and Federal Communications Commission approved the deal.

The states argued that the combination of T-Mobile and Sprint would reduce competition in the telecommunications industry, lead to higher cellphone bills and place a financial burden on lower-income customers. Once the merger is complete, the great majority of the nation's wireless users would become customers of three major providers. T-Mobile and Sprint have said they do not plan to raise prices.

In his ruling, Marrero praised T-Mobile, calling it "a maverick that has spurred the two largest players in its industry to make numerous pro-consumer changes." He added: "The proposed merger would allow the merged companies to continue T-Mobile's undeniably successful business strategy for the foreseeable future."

The deal will create a new carrier with more than 100 million users. After the merger is final, the majority of Sprint customers will eventually end up having T-Mobile plans. Customers of Sprint's prepaid brands, including Boost Mobile, Virgin Mobile and Sprint prepaid, will become Dish Network customers.

The original merger terms called for T-Mobile, the larger of the two companies, to effectively buy Sprint in an all-stock transaction that was earlier valued at $26.5 billion. Because of the lawsuit, the original deadline to complete the deal has passed, and T-Mobile has pushed to renegotiate the terms. The companies expect to close the transaction by April 1.

The combined company, to be called T-Mobile, would be a formidable rival to AT&T, the largest wireless carrier in the country, and Verizon, the second-largest. Shares in Sprint jumped 77.5% in trading Tuesday, while T-Mobile shares rose 11.8%.

"Today was a huge victory for this merger," John Legere, chief executive of T-Mobile, said in a statement. "We are FINALLY able to focus on the last steps to get this merger done!"

Marcelo Claure, executive chairman of Sprint, said the judge's decision "validates our view that this merger is in the best interests of the U.S. economy and American consumers." Claure also is chief operating officer of SoftBank, the Japanese conglomerate that controls the company.

Letitia James, the New York attorney general who was a key plaintiff in the case, warned Tuesday that the deal would not be good for consumers.

James, who has argued that a merger would cost subscribers at least $4.5 billion annually, called the ruling "a loss for every American who relies on their cellphone for work, to care for a family member, and to communicate with friends."

T-Mobile has promised not to raise prices for three years and said "efficiencies" it gets from a more powerful network will translate to lower prices down the road.

Gigi Sohn, a former FCC adviser who is now a fellow at Georgetown University's law school, said that while consumers are often promised benefits from mergers, "what they are left with each time are corporate behemoths" that can raise prices and destroy competition.

In the airline industry, there have been price increases and quality deterioration, like flight delays, on routes where carriers used to compete and then merged, said John Kwoka, an economics professor at Northeastern University.

T-Mobile and Sprint have long said the merger was crucial to their futures in an industry challenged by pricing wars that have undercut profits and stalled growth. By combining with Sprint, T-Mobile has said that it would be able to accelerate its development of 5G, the next generation of cellular networks.

The deal also is important to Sprint, which has bled cash and subscribers in recent years.

The new company will be led by Mike Sievert, a T-Mobile executive who will take over from Legere, the face of the company since 2012 who will leave when his contract is up in April.

Legere and Claure were once rivals whose companies needled each other in advertising campaigns and social-media posts. All was forgotten by April 2018, when the two companies announced their intention to join forces.

The two corporate leaders made personal appeals to officials in Washington as they worked to secure approval for the merger, which was granted by the Justice Department and the FCC last year.

Legere made numerous visits to the FCC and the Justice Department, and Claure was a host of a fundraiser for Rep. Marsha Blackburn, R-Tenn. Several lawmakers expressed misgivings over Legere's Washington visits, noting the dozens of times that he and other T-Mobile executives stayed at the Trump International Hotel when in town. The companies have denied doing anything inappropriate.

To get the nod from the government, T-Mobile and Sprint agreed to sell off significant portions of their businesses to the pay-television operator Dish Network as part of the plan to create a supersize wireless company.

Another judge still needs to approve the Dish settlement, a process that is usually straightforward but has taken longer than expected.

Another key figure who would benefit from the deal is Masayoshi Son, the chairman of SoftBank. Son has been trying to offload Sprint, a debt-laden business, for years.

In December 2016, Son met with Donald Trump, who was then the president-elect, at Trump Tower and pledged to invest some $50 billion in the United States in an initiative that would create 50,000 jobs. In February 2017, SoftBank executives held discussions in Washington with members of the president's economics team.

Recently, Son has come under pressure from activist investor Elliott Management. SoftBank's outsize investments in tech startups, including WeWork, have failed to deliver for investors, and Son has struggled to raise more cash for a new investment fund.

Dish has spent about $21 billion over a decade buying wireless spectrum, the airwaves for transmitting data and calls, although Dish hasn't done much with it. Analysts have long been skeptical of whether Dish intends to build its own network or sell the spectrum to others. Now Dish faces up to $2.2 billion in fines if it fails to create a 5G network that serves 70% of the country by 2023.

George Slover, senior policy counsel for Consumer Reports, said Sprint was an established carrier with a track record of spurring competition, while Dish is an unproven newcomer that will have to build its mobile phone network and services from scratch.

Information for this article was contributed by Edmund Lee of The New York Times; by Tali Arbel of The Associated Press; and by Taylor Telford of The Washington Post.