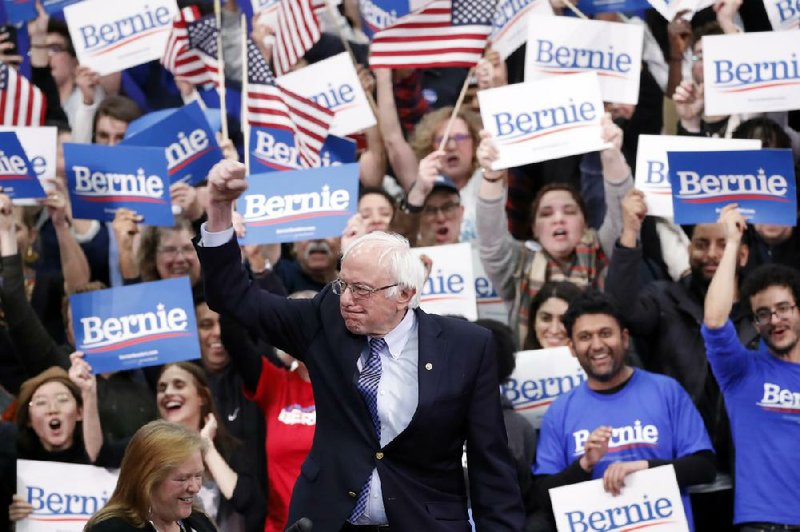 "This victory here is the beginning of the end for Donald Trump," Sanders declared.

Sanders boasted of "a movement from coast to coast ... to defeat the most dangerous president."

[Video not showing up above? Click here to watch » https://www.youtube.com/watch?v=_p_vJbFPsCs]

Buttigieg praised Sanders but also referred to the senator's political movement, suggesting that it spurned anyone who didn't agree "100 percent of the time."

"So many of you chose to meet a new era of challenge with a new generation of leadership," Buttigieg told his supporters.

Sen. Amy Klobuchar of Minnesota, a Midwestern moderate like Buttigieg, finished in third place. It was a strong showing for Klobuchar, who surged after her debate performance on Friday.

"Tonight in New Hampshire, as everyone had counted us out even a week ago," Klobuchar said, "I came back and we delivered."

Neither former Vice President Joe Biden, in fifth place, nor Sen. Elizabeth Warren of Massachusetts, finishing in fourth, was on track to receive any delegates.

The New Hampshire primary began narrowing the Democrats' 2020 field even before the final results were known. Entrepreneur Andrew Yang, having attracted a small but loyal following over the past year, suspended his campaign. He was one of just three ethnic minorities left in the race.

Yang said he felt his message resonated but that voters wanted someone with a "different profile that they had felt a higher degree of familiarity with and security with."

Speaking to reporters Tuesday night, Yang insisted that his central campaign promise, of a universal basic income that would give every American adult $1,000 per month, would continue on.

Yang declined to endorse any specific Democratic candidate, saying he would get behind anyone who came out in support of the universal basic income and made it a top priority in their administration.

Also out of the race is Sen. Michael Bennet of Colorado, who ran as a moderate in a race in which liberal candidates grabbed the headlines.

Former Massachusetts Gov. Deval Patrick, who entered the race in November, trailed far behind the leading contenders. Patrick said Tuesday night: "We needed the winds from New Hampshire at our back to carry us on in this campaign."

Patrick said he would consult with his wife and "make some decisions" this morning.

Warren took the stage at her party near the airport in Manchester barely 20 minutes after polls closed in some areas Tuesday. She spoke for 15 minutes.

Warren said that both Sanders and Buttigieg had "strong nights" and congratulated her "friend and colleague" Klobuchar for how wrong political pundits are "when they count us out."

She said Sanders and Buttigieg are "both great candidates," adding, "I respect them both, but the fight between factions in our party has taken a sharp turn in recent weeks."

Warren called herself the best candidate to unite the Democratic Party, adding, "The fight we're in, the fight to save our democracy, is an uphill battle, but our campaign is built for the long haul, and we're just getting started."

Several candidates remain in the competition for the chance to take on Trump this fall. Tuesday's contest came just eight days after Iowa caucuses injected chaos into the race and failed to report a clear winner.

While the focus was on the Democratic side, Trump easily won New Hampshire's Republican primary. He was facing token opposition from former Massachusetts Gov. Bill Weld.

The president still had a steady flow of Republicans showing up to vote for him. Tiffany Cripps, an office manager, said Trump "might make me cringe in the things that he says," but she quickly added that she cared more about his performance.

For Sanders, the New Hampshire primary was an opportunity to build on his dominance of the party's left flank.

The Sanders campaign said it is raising more than $1 million per day.

Aides to Sanders said Tuesday that he had received 600,000 contributions in the first nine days of February and had topped 7 million contributions overall in his 2020 campaign as of Sunday.

That means the Sanders campaign was processing an average of 66,666 contributions per day during that nine-day period. His average donation in January was $18.72.

If his average donation has stayed steady in February, then Sanders would be raising nearly $1.25 million per day, or $11.2 million overall in nine days.

That donation pace was significantly faster than it was in January, when the Sanders campaign raised $25 million. His campaign said it had received 1.3 million donations in January, a 31-day period, which comes to about 42,000 per day.

Other top campaigns have not released fundraising details for January or February.

After essentially tying with Sanders for first place in Iowa, Buttigieg began Tuesday as the centrist front-runner.

Even before New Hampshire polls closed, Buttigieg thanked supporters and expressed optimism outside a high school in Bedford.

"From before dawn until just before the polls are about to close, it's been a fantastic day," Buttigieg said in remarks that lasted 40 seconds. "We've seen the energy across the state."

But Klobuchar was mounting a spirited bid for the same voters.

The senator from Minnesota said she has redefined the word "grit" and had beaten the odds once again in New Hampshire.

Speaking to supporters in Concord on Tuesday night, Klobuchar thanked New Hampshire voters before turning her focus to a broader audience. "Hello, America, I'm Amy Klobuchar, and I will beat Donald Trump," she said.

Having already predicted he would "take a hit" in New Hampshire after a distant fourth-place finish in Iowa, Biden was essentially ceding the state. He was traveling to South Carolina on Tuesday as he bet his candidacy on a strong showing in that state later this month, boosted by support from black voters.

"While the results don't seem to be what we hoped, we're going to take our campaign to every corner of this country," Biden Owens said.

Appearing to the audience via livestream, Joe Biden vowed to return to defeat Trump in November's general election.

"Regardless of what happens on Tuesday, we plan to move forward," Biden senior adviser Symone Sanders said earlier in the day.

While, in South Carolina, Biden said: "We just heard from the first two of the states. ... Where I come from, that's just the opening bell, not the closing bell."

"You can't be the Democratic nominee, you can't win a general election as a Democrat, unless you have overwhelming support from black and brown voters," Biden said. He spoke directly to the black community in saying that Democrats "don't listen enough," but he added, "I've never not listened to you."

More than a year after Democrats began announcing their presidential candidacies, the party is working to coalesce behind a message or a messenger in its quest to defeat Trump. New Hampshire voters weighed whether candidates were too liberal, too moderate or too inexperienced.

Some candidates sought to undercut the importance of the New Hampshire vote, but history suggested otherwise. No Democrat has ever become the party's presidential nominee without finishing first or second in New Hampshire.

Democrats were closely monitoring how many people showed up for Tuesday's contest. New Hampshire's secretary of state predicted record-high turnout, but if that failed to materialize, then Democrats confront the prospect of waning enthusiasm after a relatively weak showing in Iowa last week.

Anand Natrajan and Kusum Ailawadi, a married couple, went to the polls to vote together in New Hampshire -- but not for the same candidate.

Natrajan, a scientist, said he had backed Sanders because he thinks he has "a realistic chance" to defeat Trump. But Ailawadi, a college professor, said she had written in former New York City Mayor Michael Bloomberg, who is not even competing in the early nominating states, because she's skeptical that the more progressive candidates can win the general election.

Both said they had decided at the last minute.

Then there's Kristi Gaynor, who works at a health care company. She went to the polls with her infant and said she had voted for Warren because she thought "she has the best chance of winning against Trump."

"I hear a lot of Republicans tomorrow will vote for the weakest candidate possible of the Democrats," Trump said Monday. "My only problem is I'm trying to figure out who is their weakest candidate. I think they're all weak."

Trump also criticized Bloomberg, who was showing signs of strength in polling around the country but wasn't on the New Hampshire ballot. The president highlighted Bloomberg's comments during a 2015 appearance at the Aspen Institute in which he said the way to bring down murder rates was to "put a lot of cops" in minority-group neighborhoods because that's where "all the crime is."

After New Hampshire, the political spotlight shifts to Nevada, where Democrats will hold caucuses on Feb. 22. But several candidates, including Warren and Sanders, plan to visit states in the coming days that vote on Super Tuesday, signaling they are in the race for the long haul.

Information for this article was contributed by Steve Peoples, Kathleen Ronayne, Hunter Woodall, Will Weissert, Holly Ramer and Thomas Beaumont of The Associated Press; by Alexander Burns, Shane Goldmacher and Lisa Lerer of The New York Times; and by Matt Viser, Sean Sullivan, Scott Clement, Chelsea Janes and Annie Linskey of The Washington Post. 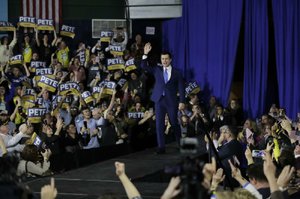 Pete Buttigieg arrives at a rally Tuesday night in Nashua, N.H., where he finished a close second in the New Hampshire Democratic presidential primary. “So many of you chose to meet a new era of challenge with a new generation of leadership,” Buttigieg told supporters. (AP/Charles Krupa) 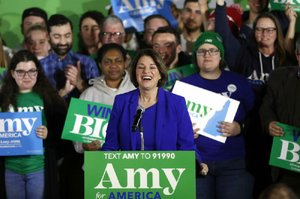 “Tonight in New Hampshire, as everyone had counted us out even a week ago,” Sen. Amy Klobuchar said Tuesday night in Concord, N.H., of her third-place finish. “I came back and we delivered.” (AP/Robert F. Bukaty) 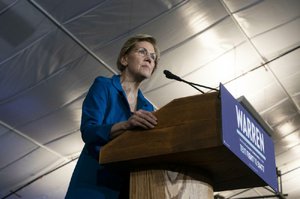 Sen. Elizabeth Warren speaks at her election party Tuesday night in Manchester, N.H. Warren, who finished in fourth place, was unlikely to receive any delegates from the primary. (The New York Times/Ruth Fremson)