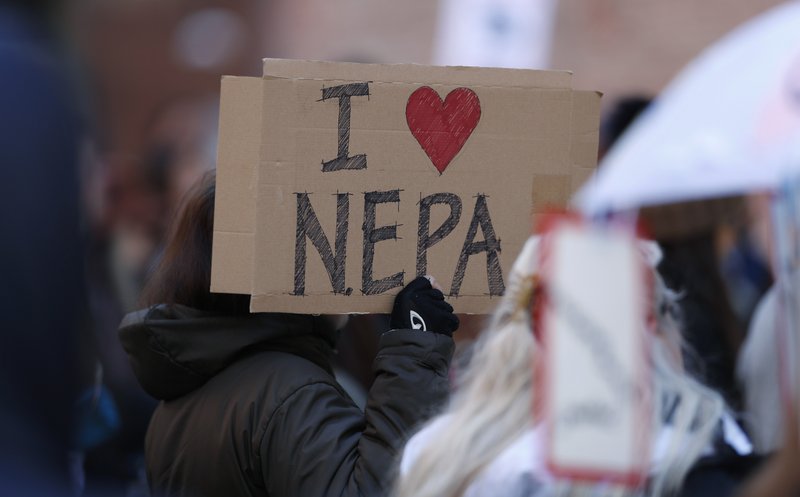 Joan Lutz of Boulder, Colo., waves a placard at a rally of advocates to voice opposition to efforts by the Trump administration to weaken the National Environmental Policy Act, which is the country's basic charter for protection of the outdoors on Tuesday, Feb. 11, 2020, in Denver. (AP Photo/David Zalubowski)

DENVER -- The Trump administration on Tuesday hosted the first of two hearings on its proposal to speed energy and other projects by rolling back a landmark environmental law. Opponents from Western states argued the long-term benefits of keeping the environmental reviews.

Among other changes, President Donald Trump wants to limit public reviews of projects -- a process that's enshrined in the National Environmental Policy Act signed in 1970 by President Richard Nixon. The administration also wants to allow project sponsors to participate at an early stage of drafting federal environmental impact statements.

Dozens of environmental and tribal activists testified at the Denver hearing of the president's Council on Environmental Quality.

The act "is not just a tool to reduce impacts to the environment," said Gwen Lachelt. a commissioner in Colorado's La Plata County. "It's a basic tool of democracy."

That proposed changes chagrined Jeanne Crumly, a rancher from Nebraska who has fought construction of the Keystone XL oil pipeline for more than a decade. President Barack Obama canceled the project, only to have it resurrected by Trump.

"We've learned over the 10 years in our dealings with the pipeline supporters about falsehoods," said Crumly, sporting a "No Oil on Our Soil" button. "The possibility that they could create their own environmental impact statement is just ludicrous to us."

Trump's plan is backed by the U.S. Chamber of Commerce, American Petroleum Institute and other business and trade groups.

Among other changes, the proposal would streamline environmental assessments and would not require "analysis of cumulative effects," which environmentalists say include a project's potential impact on climate change.

The law "has done more than any other law in the last 50 years to protect America's lands and wildlife and ensure public comment," said Aaron Weiss, deputy director of the Center for Western Priorities. "It's completely on brand that the Trump administration is cutting the American public out of the process."

Activists held a rally and other events outside the hearing at the regional headquarters of the Environmental Protection Agency.

Backers of the proposed changes call the law outdated and a deterrent to infrastructure investment. They also insist the changes won't eliminate environmental reviews. Sen. Steve Daines, R-Mont., has released a letter signed by 17 other senators urging adoption of the new rules.

Colorado Gov. Jared Polis, a Democrat, issued a statement acknowledging the need to reduce red tape but said it must be done without weakening environmental protections. Several members of Polis' cabinet testified Tuesday, including the director of the Colorado Energy Office.

Ben Rhodd, a tribal historic preservation officer for the Rosebud Sioux Tribe in South Dakota, labeled the proposed changes a "direct effrontery to the sovereignty of Native Americans" because, he said, tribal governments weren't consulted beforehand.

The administration's proposal does call for increased involvement of tribal governments.

Another hearing will be held Feb. 25 in Washington.

Information for this article was contributed by Thomas Peipert of The Associated Press.