DeBoer hopes to guide Vegas back to playoffs 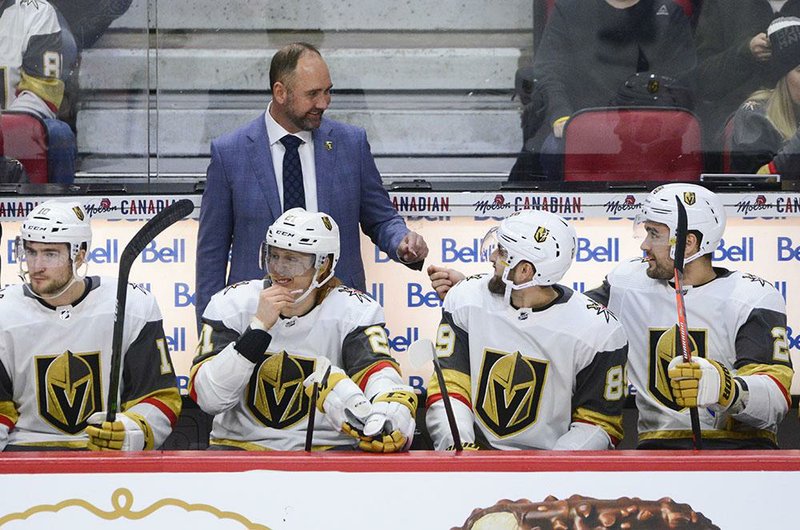 Instead, he's enjoyed a mostly successful career behind an NHL bench. In each of his first seasons with the New Jersey Devils and San Jose Sharks, he took his team to the Stanley Cup final.

But in December, just 33 games into his fifth season with San Jose, the Sharks fired him after a lackluster start. He wasn't out of work long. The Vegas Golden Knights hired him just over a month later.

The 51-year-old veteran coach can make strong arguments he can guide the three-year old franchise back to the postseason.

"They're right in the middle of being one of those teams that has the opportunity to win now and for the near future," DeBoer said. "Sometimes when you're bringing in some new concepts and some new ideas there's some hesitation in the play that shows up on the ice just because guys are overthinking instead of reacting. The one thing I've appreciated, [this is a] really smart group. They've seemed to have incorporated what we're asking them to do without slowing them down, and that's been important."

Vegas was 24-19-6 when Gerard Gallant was fired as coach last month. Under DeBoer, the Golden Knights are 4-3-2 and have outscored their opponents 31-27, even after back-to-back losses, including Tuesday's 4-0 setback in Minnesota. Their shots per game have increased slightly from 34.0 to 34.9, while their shots-allowed have decreased from 30.5 to 27.8 per contest.

The Golden Knights have shown a commitment to hustling, they're making an extra effort to block shots, they exit the defensive zone and they move in transition quicker and more cleanly.

Since DeBoer's arrival, forwards Paul Stastny and Mark Stone are tied for 28th in the league with 10 points each, while defenseman Shea Theodore has registered nine of his 37 points (24.3%)

"The second he stepped into that room he had a lot of good things to say," Theodore said. "I think he's got some really important systems that he put in place that makes us a stronger team. A lot of times it forces us to communicate. Maybe work a little bit harder towards the puck and I think key things that bring our game together."

In a stacked Pacific Division, the Golden Knights will need to get through an upcoming tough slate if they want to make the postseason for a third consecutive season.

"There's always a game plan for whatever team we're playing against," Vegas forward Chandler Stephenson. "He's just very detailed and I think that that shows because we got a lot of speed on the team and a lot of guys with high hockey IQs. That helps with the playing style that he's come in and tried to push on us. It's been working and we're having fun with it."

If they need further convincing they've got the right man, the Knights need only look at what he's done after breaks in play, whether it's been the All-Star Break, an Olympic break or the 2012 lockout.

"I got to spend three years with him, he's a great coach there's no doubt in my mind," Sharks forward Timo Meier said after DeBoer was hired. "I think everybody here knew he was going to get a job somewhere else. Obviously, they're a good team. They've got loud fans. ... It's a good chance for him."

The consensus is that DeBoer's mindset and attention to detail will steer the Golden Knights in the right direction. He admits he uses his law background to his advantage, an important edge to have in convincing a group that was fond of Gallant, many of whom took the blame for his ousting.

DeBoer said he believes it's not just their job to prove themselves, but also his job to persuade his players he's the right person to lead the charge.

"I definitely apply my legal degree every day," DeBoer said. "Both in preparation for what we're giving the players, but also in actually sitting down and making a case to them why we're asking them to do certain things, both for their own good and for the good of the team.

Print Headline: DeBoer hopes to guide Vegas back to playoffs