Nevada, S. Carolina contests next up by Compiled by Democrat-Gazette staff from wire reports | February 13, 2020 at 6:58 a.m. 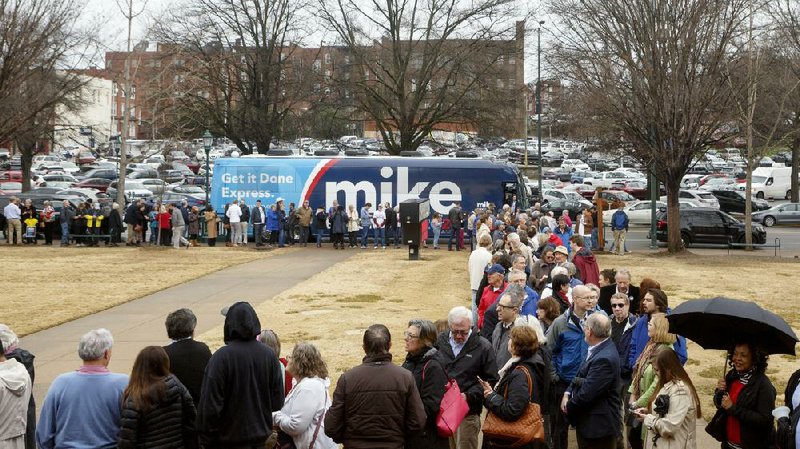 Sen. Bernie Sanders' win in the New Hampshire primary set off a new round of strategizing among moderate party stalwarts searching for a way to knock the Vermont independent off course.

Former Vice President Joe Biden made a personal appeal to donors, while Sen. Amy Klobuchar rushed to take advantage of a burst of momentum and money. Pete Buttigieg, finishing second to Sanders in New Hampshire and slightly leading in delegates, made a pitch to pull union members away from the progressive senator.

The race rolls ahead to Nevada, which holds a caucus on Feb. 22, and South Carolina, where the primary is a week later. That lineup sets up a fight over the voters largely left out of contests in Iowa and New Hampshire, namely Hispanic, black and union voters.

[Video not showing up above? Click here to watch » https://www.youtube.com/watch?v=_p_vJbFPsCs]

Buttigieg, the former mayor of South Bend, Ind., argued that Sanders' Medicare for All plan would unravel some union members' gold-standard health care plans, pointing to the influential Culinary Union that represents workers on the Las Vegas Strip.

"If the choice is between Sen. Sanders telling them they're going to have to give that up and me saying that we can enhance and increase choice without asking them to sacrifice what they have worked so hard for, I think that is a very good debate for us to have, and I'm looking forward to having that debate," Buttigieg said on NBC's Morning Joe.

Klobuchar's campaign worked to keep momentum from Tuesday's strong third-place finish. Her campaign has received more than $6 million in recent days, and cued up two new television and digital ads in Nevada on Wednesday. She was headed to Las Vegas after a fundraiser in New York.

Biden's campaign Wednesday sought to reassure donors that it could stop the bleeding with a retooled media strategy. In a conference call with donors, Biden and advisers said he would be increasing his visibility with more media interviews and would increase spending on radio ads, according to a participant on the call.

His campaign has raised just $4 million since his performance during the Iowa caucuses, the campaign told the group, describing the disappointing finishes there and in New Hampshire as a gut check for the candidate. They offered assurances that Biden's base of support with black voters was still solid, and said it remained the key to reviving his bid once they start voting in large numbers in Nevada's caucus and South Carolina's primary.

Sen. Elizabeth Warren has struggled to expand her support in the early contests or pick up momentum that might win over black votes in South Carolina, where black voters make up more than half of the Democratic electorate.

Warren's fourth-place New Hampshire finish and its potential to deflate donors made that outreach harder. The Massachusetts senator pulled advertising from South Carolina, according to the ad tracking firm Ad Analytics. Her campaign said it was shifting money to radio and print buys in the state, as well as TV airspace in Nevada and Maine, the latter of which votes on March 3, Super Tuesday, along with California, Texas and several Southern states, including Arkansas.

Warren's intention is to stay in the race through Super Tuesday, when her home state of Massachusetts votes, according to people who have spoken with her campaign.

Also Wednesday, Troy Price, the chairman of the Iowa Democratic Party who has been under siege since the state's first-in-the-nation caucuses last week ended in disarray, will step down, he said in a letter.

Problems there delayed the reporting of the results and cast a national spotlight on mathematical irregularities in reported figures.

The Associated Press still has not called the race, and two candidates -- Sanders and Buttigieg -- have claimed victory. Each also is seeking a partial recanvass.

The race will get more competitive and more expensive for Super Tuesday. Former New York Mayor Mike Bloomberg has been campaigning in those states for weeks, opting to skip the early scramble.

On Wednesday, he drew an overflow crowd to hear his speech at a black museum in Chattanooga, Tenn., one of the Super Tuesday states. None of his major competitors has yet announced stops there.

He sought to move past newly resurfaced comments in which he defended the "stop-and-frisk" policing tactic that has believed to disproportionately affect members of minority groups.

During a stop in Chattanooga, he told reporters: "We're going to do very well in the African-American community."

"They need a good economy, they need better schools, they need more health care, they need jobs, and those are the kinds of things that I can bring to the table," he said.

His two-day tour of the South began the same day that a trio of endorsements was announced from members of the Congressional Black Caucus, including Georgia Rep. Lucy McBath, a prominent gun-control activist.

"Not only has he spent an enormous amount of money to get on air -- more than I've ever seen a Democrat spend in Texas, and not just on TV, but on Facebook, social media," said Texas Democratic Chairman Gilberto Hinojosa, "but what he's done is hired a big chunk of the Latino and African-American leadership to work for him and bring communities of color together behind his campaign."

Progressive Democratic strategist Rebecca Katz noted that Bloomberg's rivals will have a long record to sift to try to highlight unflattering moments of his career.

"There's so much content to be unearthed," she said. "He was the mayor of New York City for 12 years. That's a lot of talking."

Indeed, the comments that resurfaced Tuesday came from a 2015 appearance that Bloomberg made at the Aspen Institute. He advocated for putting "a lot of cops where the crime is, which means in minority neighborhoods."

"The language on that tape right there at the end was just insensitive, it was inappropriate and lacking in the kind of empathy and understanding of the human condition that I know Mike Bloomberg has within him," he said.

Bloomberg also likened Russia's invasion of Ukraine to the United States' expansion through history, and while he's backed marijuana legalization since starting his presidential bid, Bloomberg said in the Aspen Institute recording that legalization was "one of the stupider things that's happened across our country."

Billionaire activist Tom Steyer, who is working to attract black voters in South Carolina ahead of that state's Feb. 29 primary, called the stop-and-frisk comments "extremely disturbing" and said all the candidates should disavow such "racist stereotypes." Nina Turner, a national co-chairman for Sanders' campaign, said the comments reveal "the true nature" of Bloomberg and called on him to drop out because of them.

Bloomberg has apologized for his oversight of the stop-and-frisk program, but in Tennessee, he refused to directly apologize for the 2015 comments. In response to repeated questions, he said, "I don't think those words reflect how I led the most diverse city in the nation."

"I apologized for the practice and the pain that it caused," he said Wednesday. "It was five years ago. And, you know, it's just not the way that I think, and it doesn't reflect what I do every day."

Introducing Bloomberg in Chattanooga, Dr. Elenora Woods, president of the city's NAACP chapter, said he would be a tireless fighter for economic justice for black Americans.

Meanwhile, former Massachusetts Gov. Deval Patrick ended his 2020 campaign Wednesday after his late bid failed to catch fire or resonate with voters. He was the last remaining black candidate in the Democratic presidential field.

"The vote in New Hampshire last night was not enough for us to create the practical wind at the campaign's back to go on to the next round of voting," Patrick said in a statement. "So I have decided to suspend the campaign, effective immediately."

Patrick announced his campaign in November, long after most of his Democratic opponents. He had planned to enter the race earlier, he said, but postponed his entrance after his wife, Diane, was diagnosed with uterine cancer.

"I admire and respect the candidates in the Democratic field. They bring a richness of ideas and experience, and a depth of character that makes me proud to be a Democrat," Patrick said.

Patrick finished second-to-last in New Hampshire on Tuesday with just over 1,200 votes, after ignoring Iowa and focusing most of his time and resources on the first primary. His decision leaves just one other candidate of color, Hawaii Rep. Tulsi Gabbard, a Samoan American, in the Democratic contest. It brings the number of Democrats in the presidential primary race to eight.

In his Wednesday announcement, Patrick said he heard from many voters on the trail who appreciated his moderation, and he warned the remaining candidates to avoid getting too bogged down in political divisions.

"Patriotism demands, now more than ever, that we reject false choices. Despite our righteous anger, Democrats don't have to hate Republicans to be good Democrats. ... In that same spirit, we don't have to hate moderation to be a good progressive," he said.

Information for this article was contributed by Brian Slodysko, Julie Pace, Kathleen Hennessey, Alexandra Jaffe and Kathleen Ronayne of The Associated Press; and by Amy B. Wang and Isaac Stanley-Becker of The Washington Post. 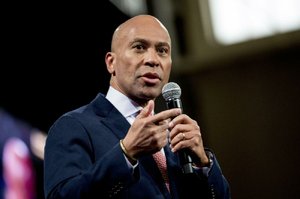 In this Feb. 8, 2020 file photo, Democratic presidential candidate former Massachusetts Gov. Deval Patrick speaks at "Our Rights, Our Courts" forum New Hampshire Technical Institute's Concord Community College, in Concord, N.H. Patrick has ended his campaign for president after his late bid failed to gain traction in the race. Patrick was the last remaining African American candidate in a Democratic presidential field once defined by its diversity.(AP Photo/Andrew Harnik)