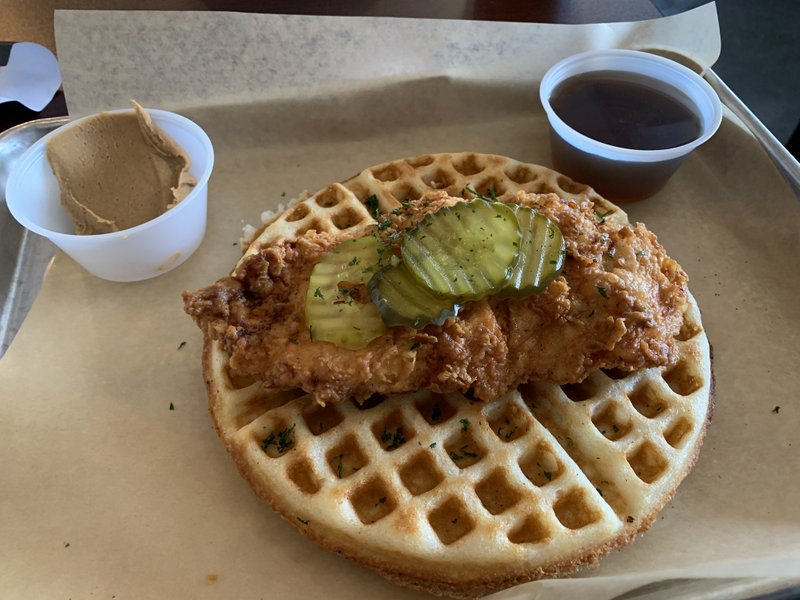 Half the menu caters to carnivores, or at least omnivores. The other half is for vegans and those who shun gluten.

So far, it seems to be working.

The restaurant, occupying three storefronts in the Lakehill Shopping Center on North Little Rock's Park Hill, has been evolving since it opened a few weeks ago, from counter-order to full service, and solidifying its bill of fare. The staff couldn't be friendlier.

It's two doors down from North Bar, where Newfangled's Snee Dismang had been working as a bartender and which her husband, Kyle Dismang, co-owns. There was briefly a menu "bio" that explained that Snee Dismang was seeking to balance her vegan lifestyle with his generally carnivorous one and this is the result, "with something for everyone and even some gluten-free options" where "Kyle has it 'his way' and Snee has it 'her way' and they lived happily ever after."

So many items on the menu have vegan or gluten-free counterparts — for example, the Brunch Burrito ($9), Cheddar, chorizo, scrambled eggs, hash browns, wild rice and tomatillo salsa on a flour tortilla, and the Vegan Brunch Burrito (also $9), with a cashew nacho cheese replacing the Cheddar, chorizo tofu and adding avocado. In many cases, the gluten-free versions of "standard" dishes just substitute Dempsey Bakery bread or Udi buns for the "glutinous" stuff from Community Bakery. The gluten-free waffles are made on dedicated equipment to minimize potential cross-contamination, something they can't guarantee but do take seriously.

Newfangled doesn't put on any airs; the three dining rooms — the front one also contains the bar and register, with the middle along the kitchen and the back encompassing the restrooms — are painted medium-to-dark gray that now sprout modest and/or whimsical artwork. Seating is at tables with composite tops and very sturdy wooden chairs.

Though Newfangled is open for dinner four days a week, most of the menu is geared toward brunch/lunch in categories labeled "Lunch Brunch Rush," "All Day Brunch" and "Highnooners." There's one item that looks to be specifically geared toward dinner: the Ribeye Steak Dinner ($25), paired with roasted vegetables and a loaded baked potato.

The Brunchos ($12) are a definite winner, plentiful, large and very fresh tortilla chips topped with chopped bacon, scrambled eggs, green onions, tomatoes, shredded cheese, sour cream and choice of grilled chicken or grilled beef, with a cup of tangy guacamole and a tomato-ey red salsa on the side. The GF Brunchos (also $12) add avocado and substitutes gluten-free chips.

We also enjoyed our Chicken & Waffles ($11.50) — well, one 7-inch waffle, actually, but it was firm, fluffy and tasty, topped with a hand-battered chicken breast and served with a little cup of maple syrup and a little cup of butter or peanut butter. We would normally have asked the kitchen to hold the butter, but the thought of peanut butter was too intriguing to pass up, and we're glad we didn't — the combination of flavors of sweet syrup, slightly sweet waffle, lightly spicy chicken and peanut butter turned out to be excellent. (A gluten-free waffle is available at the same price.)

And the Classic Eggs Benedict ($10) was also a hit, although it's not exactly "classic," substituting seared ham for Canadian bacon atop the English muffin, with a tangy hollandaise and slightly over-poached eggs. Substituting a hash brown cake for the English muffin makes possible the GF Hash Brown Eggs Benedict ($10); the hash brown cake, subbing tofu for the eggs and adding fried tomato and seared spinach, with a house-made vegan hollandaise, creates the Vegan Hash Brown Benedict ($10).

The Shevy Slam ($12), two fried eggs, two thick pieces of bacon, scattered hash browns (crispy on top and bottom, soft in the middle) and a slice of lightly toasted Community Bakery wheat bread, was merely ordinary, suffering from poor plate presentation and our request to have the eggs over medium instead of over easy, or at least not runny. The eggs arrived with broken, hard-cooked yolks that definitely were not runny. There was neither butter on the toast nor the side of jelly the menu had promised.

The establishment has a mixed-drink-minimum alcoholic beverage permit that allows for wine, craft beers on tap and mimosas, etc., for Sunday brunch.

Though the menu and a chalkboard visible as you enter warns that when the place is full or busy to expect waits of 15-45 minutes for food to come out of the kitchen, we never had a wait of anywhere near that long — it took a little longer than we expected for our lunch waffle, but on other visits, our meals came out quicker than we anticipated. Staff is pretty good about refilling drinks.