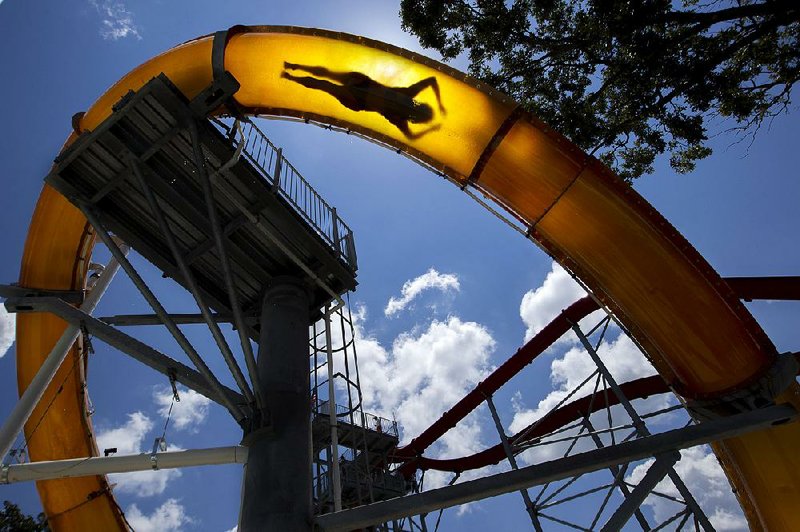 Wild River Country, the water park in North Little Rock, is awash in debt and back taxes, according to a lawsuit and publicly available tax records, leaving its reopening for the 2020 season uncertain.

The park, which has been an attraction in the city for more than 35 years, bills itself as the state's largest water park with 13 attractions, party decks, three pavilions and a volleyball court. It has attracted as many as 180,000 customers annually.

Because of the unpaid taxes -- $282,000 -- the Arkansas land commissioner's office has scheduled the 26-acre property for the auction block at 10 a.m. April 14 at Simmons Bank Arena in North Little Rock.

The auction can be canceled if the taxes are paid, said Nikki Heck, spokeswoman for the land commissioner.

If the water park goes on the auction block, bidding begins at the amount of taxes owed, she said. "We want to collect the taxes."

The park at 6820 Crystal Hill Road also faces foreclosure because its operators have been unable to make payments on two loans of nearly $2 million, according to the lawsuit filed last month in Pulaski County circuit court.

Telephone calls to the water park this week got only busy signals. As recently as two weeks ago, callers would hear a recorded message. The park's website was offering season passes for 2020, but it was not possible to access an order form to pay for them.

"Your website is down," one person posted on the park's Facebook page Tuesday. "How can I buy a season pass, man?"

A foreclosure suit was filed against previous owners in 2004 for two mortgages, then totaling $3 million.

A few months later, the state shut down the business over nonpayment of more than $200,000 in sale taxes.

The park owner since 2013 is Aquapark Holdings LLC. One of its owners had provided the park financing in the past.

Aquapark Holdings is a defendant in the latest foreclosure lawsuit, which was filed by JTS Capital 3 LLC, a company in Waco, Texas, that specializes in managing distressed assets. Michael Slattery and Slattery Holdings LLC also are defendants.

The loans at issue had been held by Centennial Bank, but the bank, according to the lawsuit, assigned right, title and interest in the loans to JTS Capital in August.

David Grace, a North Little Rock attorney, filed a response on behalf of Aquapark last week, asking that the lawsuit be dismissed for, among other things, failing to attach required exhibits to support some of the allegations, notably Centennial Bank's assignment of the mortgages to JTS Capital.

The response also claimed that the lawsuit should be dismissed because "plaintiff has failed to plead facts upon which relief can be granted" and "failed to join necessary parties" under Arkansas rules of civil procedure.

Grace was taking depositions in an unrelated case this week and was unavailable for comment, his office said.

John Owens, president and chief executive officer of the North Little Rock Chamber of Commerce, said the water park has been a member of the chamber in the past and didn't realize it no longer was listed among the chamber's 1,500 members.

He didn't know about the financial difficulties the park faces.

"We need a water park in central Arkansas," Owens said. "I hope somebody can make a go of it."