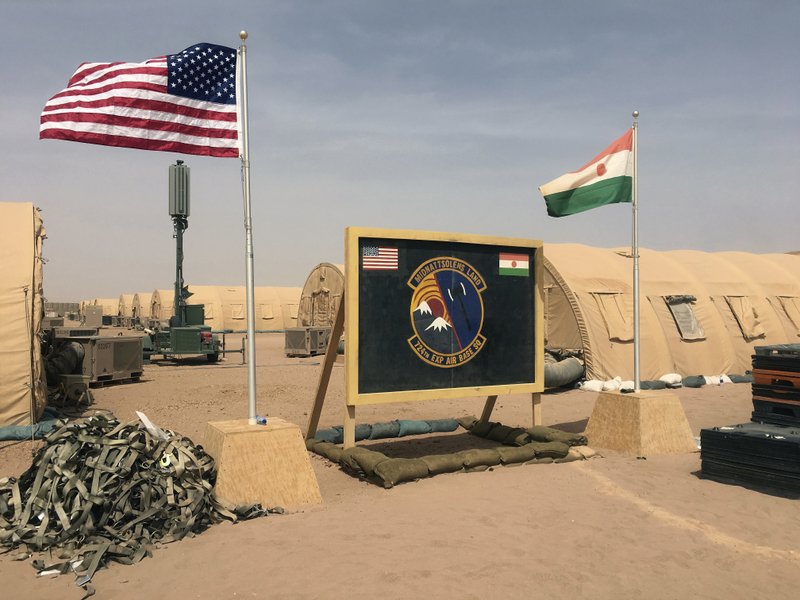 FILE- In this file photo taken Monday, April 16, 2018, a U.S. and Niger flag are raised side by side at the base camp for air forces and other personnel supporting the construction of Niger Air Base 201 in Agadez, Niger. As extremist violence grows across Africa, the United States is considering reducing its military presence on the continent, a move that worries its international partners who are working to strengthen the fight in the tumultuous Sahel region. (AP Photo/Carley Petesch, File)

JOHANNESBURG -- The U.S. military has switched from trying to degrade Islamic extremist groups in West Africa's sprawling Sahel region to merely trying to contain them as their deadly threat increases, a new U.S. government report says.

The quarterly report by the inspectors general for the Pentagon, State Department and U.S. Agency for International Development released this week was the first one to be unclassified as interest surges in the U.S. military's activities in Africa. The U.S. is considering cutting troops on the continent to counter China and Russia elsewhere in the world.

Top concerns in Africa include the fast-growing threat from extremist groups in the Sahel region just south of the Sahara Desert and the enduring threat by al-Qaida-linked al-Shabab in Somalia, which killed three Americans in an unprecedented attack against U.S. forces in Kenya last month.

Consistent pressure on extremist groups is needed to weaken them, the report says, citing Defense Secretary Mark Esper, who has compared it to "mowing the lawn." That need, along with the often slow development of local partners' militaries, "could require ongoing commitment of U.S. military resources," the report adds.

The new report says U.S. Africa Command has expressed concerns to the Pentagon's inspector general that some resources will be moved from Somalia to the North African nation of Libya, where a conflict between rival governments has drawn the attention of powers including Russia and Turkey.

About 6,000 U.S. military personnel are deployed across Africa, the report says, including 500 special operations troops in Somalia and about 800 personnel in West Africa.

The security situation in Burkina Faso "is deteriorating faster than anywhere else in the Sahel," says the new report, citing U.S. Africa Command. The West African nation is staggering under a growing number of extremist attacks as fighters move in from neighboring Mali. Hundreds of civilians have been killed and hundreds of thousands have fled.

Extremist groups affiliated with the Islamic State group and al-Qaida in West Africa's Sahel "are neither degraded nor contained," the report warns, citing U.S. Africa Command.

Late last year, U.S. Africa Command told the Pentagon inspector general that the new U.S. military strategy has switched from trying to degrade, or reduce the effectiveness, of those extremist groups to trying to keep them from growing their membership and spreading into new areas.

Mali's president this week told French media outlets that his government is now in contact with leaders of the most active extremist group, the al-Qaida-linked JNIM, a sign that troubled West African countries are exploring various options, including negotiations, to curb the threat.

France announced recently that it would increase its troop presence in the Sahel to more than 5,000 and has started arming its drones, while French leaders have urged the U.S. against cutting its military presence.