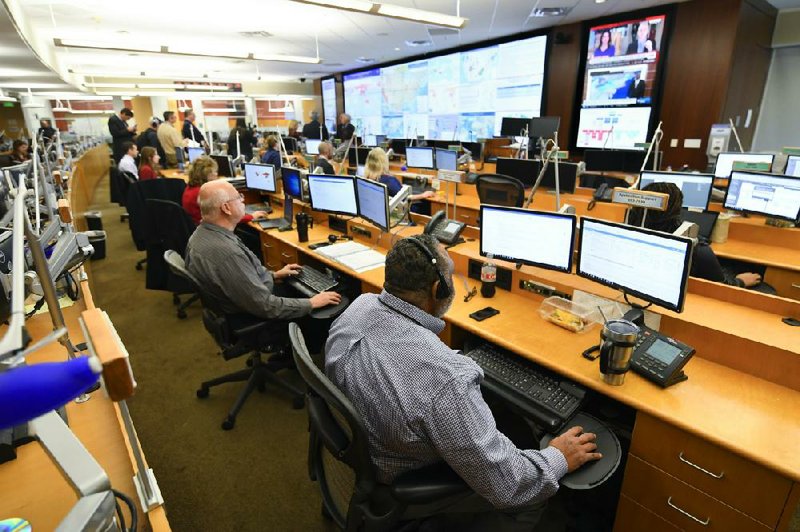 Personnel at the federal Centers for Disease Control and Prevention in Atlanta work Thursday in the Emergency Operations Center, where the coronavirus is among their top priorities. (AP/John Amis)

NEW YORK -- U.S. officials on Thursday announced the country's 15th confirmed case of the new coronavirus -- an evacuee from China who had been under quarantine in Texas.

The patient, who had been flown to Lackland Air Force Base in San Antonio last week, is now in isolation at a hospital and was reported in stable condition. The infection was confirmed through a Wednesday night lab test, making the person the first coronavirus patient in Texas. The disease caused by the virus was recently named covid-19 by the World Health Organization.

"There may be additional cases we identify. I do want to prepare you for that," said Dr. Jennifer McQuiston, deputy director of the Centers for Disease Control's unit that deals with high-consequence pathogens and pathology.

In Arkansas, there are no confirmed cases of covid-19 or any persons currently "under investigation" for having the virus, state Department of Health spokeswoman Danyelle McNeill said Thursday.

[Video not showing up above? Click here to watch » https://www.youtube.com/watch?v=0YSFpEmMlPo]

A person "under investigation" warrants testing by the CDC for the virus. The Health Department on Feb. 2 announced that an Arkansas patient tested negative for the virus.

However, the department "is actively monitoring 21 people in 'self-isolation' in the state due to their recent travel from China," Dr. Jennifer Dillaha said in a statement Thursday. Dillaha is the department's medical director for immunizations and outbreak response.

Travelers in "self-isolation" are being checked on daily and provided guidance, McNeill said.

"We aren't able to specify where any of those people in the state are being monitored," McNeill said.

Hundreds of people, including U.S. State Department employees and their families, were flown to military bases in Texas, California and Nebraska from Wuhan, a city of 11 million that is at the center of the outbreak.

There are 57 evacuees being held in quarantine at the Nebraska National Guard's Camp Ashland southwest of Omaha, none of whom have shown any signs of the virus, said Taylor Wilson, a spokesman for the Nebraska Medicine health system. He said the Omaha hospital is prepared to treat any of the evacuees if needed.

Tens of thousands of cases of the illness have been reported globally, the vast majority of them in China.

The virus can cause fever, coughing, wheezing and pneumonia. Health officials think it spreads mainly from droplets when an infected person coughs or sneezes, similar to how the flu spreads.

China reported a surge in deaths and infections from the virus Thursday after changing the way the count is tallied, further clouding an epidemic that has stirred fear as it spread to more than two dozen countries.

The spike came after two days in which the number of new cases dropped.

"What we need is some consistency over time to give us an idea of what's actually happening," said Dr. William Schaffner, an infectious-disease expert at Vanderbilt University in the United States. "Is transmission happening or is it not?"

The answer has proved frustratingly elusive despite the official reports.

In Japan, a first death -- a woman in her 80s -- was reported, the third fatality outside of mainland China, after deaths in the Philippines and Hong Kong.

And the Health Ministry in Japan announced that 44 more people on a cruise ship quarantined in the port of Yokohama, near Tokyo, tested positive for the virus, raising the total on the ship to 218.

In Vietnam, official media outlets reported that a village of 10,000 northwest of the capital, Hanoi, was put in lockdown because of a cluster of cases there.

Experts expressed hope that by today there would be a greater understanding of whether cases of the illness were growing or waning. China's continued use of its new method of counting would offer a chance for an apples-to-apples, day-to-day comparison, they said.

"The real question is whether or not the trend, using the same criteria, is up or down," said Dr. Ian Lipkin, director of the Center for Infection and Immunity at Columbia University in New York.