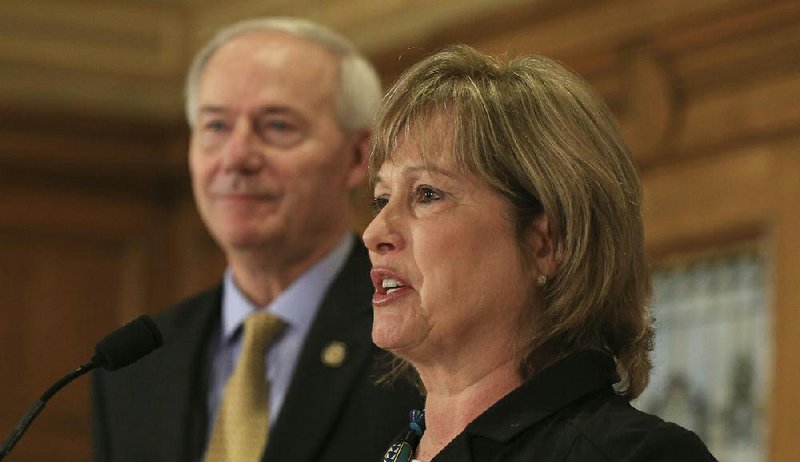 Courtney Pledger appears with Gov. Asa Hutchinson in March 2017 after she was introduced as executive director of the Arkansas Educational Television Network. On Thursday, Pledger announced that the network is changing its name to Arkansas PBS as part of a national wave of changes in public television networks. (Arkansas Democrat-Gazette/Staton Breidenthal)

CONWAY -- The Arkansas Educational Television Network will change its name to Arkansas PBS effective Feb. 28, part of a rebranding that includes a greater emphasis on reaching out to its audience via the internet, AETN Executive Director Courtney Pledger announced.

The rebranding emphasizes the state it represents and its connection to the national Public Broadcasting System.

"We hope our new name encompasses everything you've come to love about your statewide public media station while allowing audiences to more easily identify and connect with us on all platforms where our content can be found," Pledger said. "We will continue to be a daily and essential source of education, community connection and entertainment for Arkansans of all ages. We look forward to illuminating the people, places and stories Arkansans are eager to experience through fresh, local content from the Natural State and PBS programs you've trusted for decades."

The rebranding is part of a national wave of changes at PBS member stations in recognition of the national agency's 50th anniversary.

The Arkansas network, which was formed in 1966, has been a PBS member station since the national service was created in 1970.

"For 50 years, AETN has been a staple television network in our state, reliably providing quality content for Arkansans of all ages," said Gov. Asa Hutchinson. "Arkansas PBS will continue the same long legacy. Its new brand comprehensively encompasses the vision of the network and its commitment to Arkansas."

The state network's current logo is a blue ring with "AETN" slanted in the top half and touching the sides.

The new logo has three elements: the word "Arkansas," the PBS symbol -- blue heads within a circle -- and the letters "PBS."

The new logo is nearly identical to the one rolled out on Jan. 1 by Iowa PBS.

"It's been a huge, huge undertaking," said Iowa PBS Executive Director and General Manager Molly Phillips. "It has just been a really refreshing change for us. It's a really clean, crisp, modernized logo. It changes everything from the name that goes around the mics to the signs outside the building and the apparel. Everything on air has been redone."

The new logo aligns with PBS' update to its national brand that was announced in the fall, with the goal of providing a consistent viewer experience.

"For more than five decades, AETN has stood for high quality, educational broadcasting. As Arkansas PBS, they are building on that rich legacy by embracing the trust and authenticity of the PBS brand," said Ira Rubenstein, chief digital & marketing officer of PBS. "From broadcast to streaming platforms, from screens to communities, Arkansas PBS is creating a brand experience that will ensure that people across this great state can connect with the shining beacon of public television."

AETN's previous black-and-white logo hadn't had an overhaul since the 1980s. The new electric blue color will fit the digital frontier and varying platforms in which the network now operates, such as on-demand services and YouTube TV, Pledger said.

Because the change coincides with the national rebranding effort, the impact of the overhaul will be minimal on AETN's $13 million budget, Pledger said.

"PBS helped us with a rebranding grant to help defray the cost of new stationery, business cards, etc. We are carrying out all of the rebranding transitioning in-house with current staff and carrying it out in phases," Pledger said. "Our on-air rebrand is the first wave -- and that cost is purely staff time. Digital content transitioning is all done in-house as well."

There will also be further savings from grant funds that PBS is offering because of the alignment with the national network's rebranding.

"So many people watch us in so many different ways that to be called television seems not future-facing," Pledger said. "So about two years ago, we just started asking ourselves, 'What would we be? Who are we?' Our whole drive now is to be more local, produce more things that relate directly to our Arkansas audience and to make the things that they want, that they need and that they directly mean something to people."

The network will increase viewer collaboration and contribution, Pledger said, by offering opportunities for the citizen videographer or independent filmmakers to submit local content, whether it be a festival, event or highlighting a local person who has contributed to the community in some way.

"There's no longer the constraint of having to produce shows that are an hour long," Pledger said. "With more digital resources, we can put out a 20-minute clip or even shorter."

The network is also convening focus groups to contribute ideas on how to "make ourselves truly statewide," Pledger said.

In the past few years, AETN has unveiled initiatives that include statewide high school sports coverage, such as televising all football and basketball state championships; broadcast of the state's Quiz Bowl; the launch of Arkansas Citizens Access Network, an online network to livestream state legislative proceedings, board and commission meetings and other hearings and official events; and producing short documentaries and series featuring Arkansans and Arkansas communities.

"When Gov. Hutchinson appointed me to serve on the Census 2020 Committee, we stepped in to host and live stream all of the Census 2020 meetings on AR-CAN from our studios," Pledger said. "Knowing how important this effort is since even a 1% undercount can cost the state up to $1 billion over the next 10 years, we are creating individually tailored public service announcements for key officials across the state to target specific demographic groups -- and are planning a special 'Arkansan's Ask' episode to answer questions from viewers about the census."

While AETN has long been a major contributor to the education system in the state through its programming, the move to more digital content across several platforms has even widened that contribution.

"We work hard with the goal of improving our teachers through educator training so that we can increase student success and eventual quality of life," Pledger said. "In 2019, over 62,000 educators logged into IDEAS learning management system featuring over 600 course created by our own in-house educators."

Pledger said the network is identifying more ways to contribute to early childhood education locally in addition to the PBS Kids programming.

The network is also launching the "Be Pro, Be Proud: Building Tomorrow's Workforce," a 10-part digital series created in partnership with the Arkansas State Chamber of Commerce and Sen. Jane English, R-North Little Rock, to build Arkansas' skilled workforce.

"There are many skilled jobs overlooked in Arkansas because students are simply unaware of the opportunities that exist," Pledger said. "Each episode will focus on a different career path in the technical profession and aims to transform the future of our state's workforce."

Pledger said she wants to assure viewers that while the network's name is changing, their favorite PBS programs will still be wherever they have become accustomed to watching them.

"Our commitment remains to Arkansans in Arkansas," she said. "That will never change."