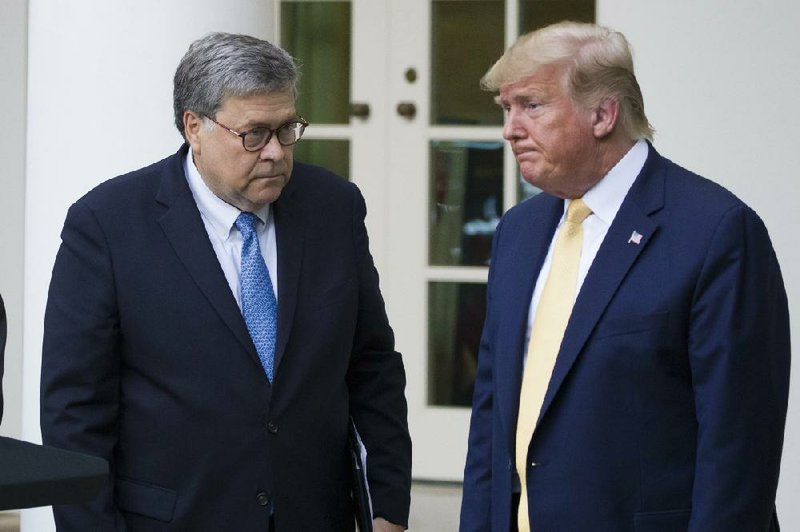 Attorney General William Barr speaks with President Donald Trump during a Rose Garden event in July. In an interview Thursday with ABC News, Barr said tweets by Trump have called into question the independence of the Justice Department. (AP/Alex Brandon)

WASHINGTON -- Attorney General William Barr took a public swipe at President Donald Trump on Thursday, saying that the president's tweets about Justice Department prosecutors and cases "make it impossible for me to do my job."

Barr made the comment during an interview with ABC News just days after his Justice Department overruled its own prosecutors -- who had recommended in a court filing that Trump adviser Roger Stone be sentenced to 7-9 years in prison -- and took the step of lowering the amount of prison time it would seek. The department didn't offer an amended number.

Barr has been under fire for that Justice Department action.

"It's just a different method of communicating with the American people and the president has every right to weigh in," O'Brien said. "He's got First Amendment rights, even though he's president. And he's got a right to weigh in with his opinions on the big issues of the day, and I think he's going to continue to do that."

Earlier this week, Trump applauded Barr on Twitter for the decision to reverse the sentencing recommendation, writing: "Congratulations to Attorney General Bill Barr for taking charge of a case that was totally out of control and perhaps should not have even been brought."

The department insisted that the decision to undo the sentencing recommendation was made Monday night -- before Trump blasted the recommendation on Twitter as "very horrible and unfair"-- and prosecutors had not spoken to the White House about it. The about-face prompted the four attorneys who prosecuted Stone to quit the case. One left the Justice Department altogether.

"I'm happy to say that, in fact, the president has never asked me to do anything in a criminal case," Barr said in the ABC interview. "However, to have public statements and tweets made about the department, about our people in the department, our men and women here, about cases pending in the department, and about judges before whom we have cases, make it impossible for me to do my job and to assure the courts and the prosecutors in the department that we're doing our work with integrity."

Stone was convicted in November of tampering with a witness and obstructing the House investigation into whether the Trump campaign coordinated with Russia to tip the 2016 election. He's scheduled to be sentenced next week.

Barr said he was "of course" prepared to deal with any ramifications from the president for his comments.

"As I said during my confirmation, I came in to serve as attorney general. I am responsible for everything that happens in the department, but the thing I have most responsibility for are the issues that are brought to me for decision," Barr said in the interview.

"What they did to Roger Stone was a disgrace," Trump said Thursday during an interview with Geraldo Rivera on Newsradio WTAM1100.

"Now what am I going to do, sit back and let a man go to jail maybe for nine years when murderers aren't going to jail? You have some of the most serious, horrible rapists and everything else. They don't go to jail for nine years," Trump said.

Senate Judiciary Committee Chairman Lindsay Graham tweeted his support for Barr, saying the president had done a "great service" for the people by selecting Barr.

"This all must be investigated," she said. "The American people must have confidence in our nation's system of impartial justice."

At her news conference, Pelosi directly criticized Trump, arguing that he "thinks he's above the law."

"This is an abuse of power that the president is again trying to manipulate federal law enforcement to serve his political interests," she said.

She described the decision by the four prosecutors to withdraw from the Stone case as "an act of courage" and said Republicans must not be silent on the matter.

"Where are the Republicans to speak out on this blatant violation of the rule of law?" Pelosi asked. "AG Barr has deeply damaged the rule of law by withdrawing the DOJ's sentencing recommendation."

Senate Majority Leader Mitch McConnell, R-Ky., pointed the finger at Democrats in a floor speech Thursday morning in which he accused them of violating the country's "norms and traditions" by voting to impeach Trump.

"It was they who included political bloodlust at the expense of our institutions," he said. "There has been much discussion about the foreign adversaries who seek to reduce the American people's faith in our democracy and cause chaos and division in our country. Rightly so, but we must also demand that our own political leaders exercise some self-restraint and not do the work of our adversaries for them."

On Thursday, Barr said he would not be "bullied or influenced by anybody."

"And I said, whether it's Congress, newspaper editorial board, or the president. I'm gonna do what I think is right. And, you know, the, I think the -- I cannot do my job here at the Department with a constant background commentary that undercuts me."

Also on Thursday, Trump wrote on Twitter that the forewoman of the federal jury that heard the case against Stone had "significant bias."

"Add that to everything else, and this is not looking good for the 'Justice' Department," he added.

Trump's tweet came a day after reports that Tomeka Hart, a former president of the Memphis City Schools board of commissioners, had identified herself as the forewoman of the jury in a Facebook post, saying she "can't keep quiet any longer" in the wake of the Justice Department's efforts to seek a more lenient sentence for Stone.

Fox News reported Wednesday that the forewoman of the Stone jury was an anti-Trump Democratic activist.

"It pains me to see the DOJ now interfere with the hard work of the prosecutors," Hart said in the post, the authenticity of which CNN reported was verified by Hart. "They acted with the utmost intelligence, integrity, and respect for our system of justice."

Reports on Hart's post prompted widespread scrutiny of her other social media postings, including some that suggested animus toward Trump.

Although Hart was not named by the trial court, the juror's identity was always known to Stone's defense and prosecutors throughout pretrial proceedings, and she disclosed her background, including a Democratic bid for Congress, in public pretrial jury selection proceedings.

Stone's defense and his trial judge had the opportunity to question Hart directly and challenge her eligibility.

Potential jurors were also asked whether they or any close friend or family member had ever run for or held federal, state or local office, whether they had formed any opinion about Trump or former Secretary of State Hillary Clinton, and whether their possible connection in the case "would make it difficult for you to be fair and impartial to both sides?"

The questionnaire required prospective jurors to disclose whether they had "written or posted anything for public consumption" about Stone or the House or special counsel investigations into Russian interference in the 2016 presidential election.

It is not known how Hart answered the social media question or whether she had commented publicly on Stone. But Hart, in jury screening that was observed by the public, said she had not formed an opinion about Stone, and she was seated after both sides had a chance to press her on that point. Hart's identity was apparent to observers, but court rules forbid naming jurors publicly.

Stone's sentencing is scheduled for Thursday.