Colombia gets a hand to kick cocaine

Buffett money devoted to making it possible for rural farmers to adapt by JOSHUA GOODMAN The Associated Press | February 14, 2020 at 3:49 a.m. 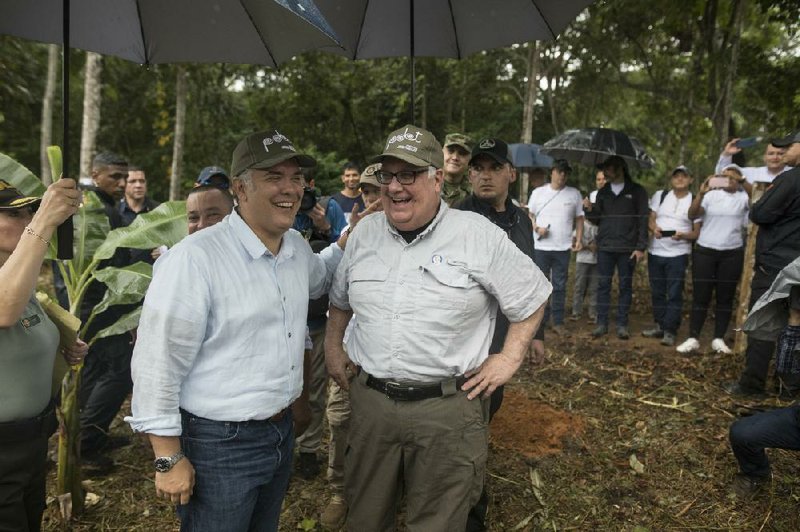 TIBU, Colombia -- For nearly two decades Howard Buffett has crisscrossed the world giving away part of his father's fortune to promote food security, conflict mitigation and public safety. But his latest gamble is helping Colombia kick its cocaine curse.

With Colombian military snipers in position, Buffett descends from a helicopter and walks toward a small group of coca farmers. They've never heard of multibillionaire investor Warren Buffett, but after decades of neglect by their own government they're grateful for the outstretched hand of his eldest son, who they refer to simply as "the gringo."

Tibu has the second largest coca crop in Colombia -- 28,200 acres, according to the United Nations. Drug production and violence have skyrocketed in the area since armed groups filled the void left by retreating rebels who signed a peace deal with the government in 2016.

The Howard G. Buffett Foundation has committed to spending $200 million over the next few years to transform the impoverished municipality into a model of comprehensive state building. Plans include strengthening security forces and helping farmers secure land titles and substitute coca -- the raw material for cocaine -- with legal crops such as cacao.

The first component is building 185 miles of roads to connect the municipality's 37,000 residents with national and international markets for the first time.

"The only way we have confidence that farmers can grow legal crops is if they can get those crops to market," Buffett told farmers during a visit last month with Duque to La Gabarra, a rural outpost in Tibu. It was the first time any Colombian president had visited the hamlet.

The plan envisions subsidies and training for farmers as they switch crops, as well as helping them find buyers. It also aims to strengthen infrastructure for local law enforcement.

A lot is riding on Buffett's investment.

Not since the start of the U.S.-led Plan Colombia two decades ago have so many resources converged on a single geographical area, said Alvaro Balcazar, who helped the government negotiate with the Revolutionary Armed Forces of Colombia the section of the peace deal focusing on illicit crops.

"There's no precedent for something on such large a scale," Balcazar said. "But the region is strategic for consolidating peace in Colombia."

Howard Buffet is the non-executive chairman of Berkshire Hathaway, the $550 billion conglomerate that owns companies such as Duracell, Dairy Queen and GEICO insurance as well as major stakes in leading U.S. airlines and banks.

As a philanthropist, his priority now is helping Colombia and El Salvador, whose fight against drug trafficking has a direct impact on the U.S. Between the two countries he has already spent or committed $310 million.

Buffett began working in Colombia in 2008 helping pop star Shakira set up schools in her hometown of Barranquilla. He's also funded an army unit removing thousands of landmines strewn across former conflict zones. Leveraging his business contacts, he established a program to help about 100 families in southern Colombia switch from growing coca to producing high-quality coffee for Nespresso.

While an enthusiastic supporter of the 2016 peace deal, he has nonetheless struck a close relationship with Duque.

Duque has vowed to slash cocaine production in half by the end of 2023. Production of the drug skyrocketed after his predecessor -- Nobel Peace Prize laureate Juan Manuel Santos -- halted aerial eradication in 2015 because of health concerns over the herbicides used. But reaching that goal requires huge resources the government doesn't have.

That's where Buffett steps in.

The $200 million Buffett has pledged for Tibu is more than triple what the government has spent the past two years altogether on public works in 170 high-risk municipalities that are part of a rural development rescue plan mandated by the peace deal. The U.S. Agency for International Development spends $230 million a year in Colombia, although its projects are spread across the country.

Print Headline: Colombia gets a hand to kick cocaine