Arkansas Board of Education delays decision on penalty for hateful text 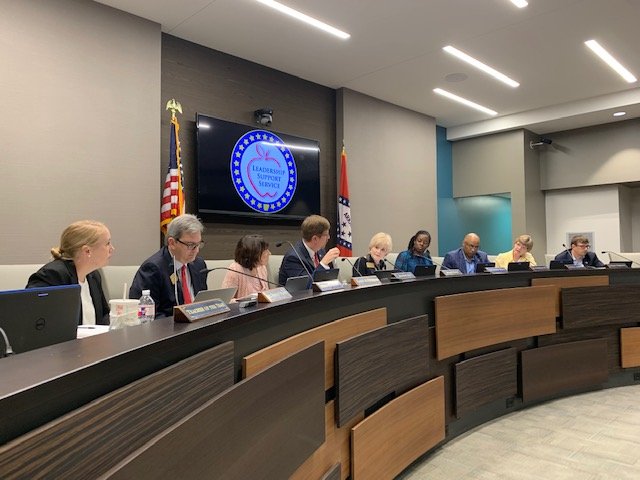 The Arkansas Board of Education on Thursday delayed until at least March a decision on a penalty to be levied against a Dumas School District faculty member who is accused of sending a racially hateful text message to a black parent.

Bobby Max Pennington, who is white and was at the time of the text message a coach and dean of students at Dumas New Tech High School, had recently agreed to a penalty recommendation from the Arkansas Professional Licensure Standards Board's Ethics Subcommittee.

That proposed penalty called for Pennington's state-issued teacher license to be placed on probation for two years, that he pay a $250 fine and that he view certain training videos and read specific articles and/or books upon which he would provide written reflections as to how the training would affect his interactions in the classroom and on the playing field.

The Education Board had the option Thursday of upholding the proposed penalty, or giving notice to Pennington that it is considering a different action and allow him to speak in his defense before the board. Pennington also has the opportunity to ask for a full hearing.

Education Board member Fitz Hill of Little Rock made the motion to table any action on Pennington until March. That was approved with a 6-0 vote.

At the end of May, Pennington had sent a parent a text saying "I hate" and used a racially derogatory term, members of the Dumas community told the Education Board in August. Pennington followed that text with a second text to the parent saying, "Oh my God, I meant beggars."

The Rev. Johnny Smith, a community member, told the board that Pennington has caused tension and dissension in Dumas. and that efforts to fire or otherwise penalize Pennington have been circumvented and/or diminished, he said. That included a 100-day suspension that inappropriately included weekends and not just contractual work days, he said.

Additionally, students who chose to no longer participate in athletics under Pennington's direction were assigned to a classroom that became known as the quitters' room, Smith said.

Education Board members voted to delay Pennington's case at a meeting in which they accepted the voluntary surrender of a teaching license from one educator and revised the penalty of another. The two were co-coordinators of an after-school community program in Bald Knob. Arkansas Bureau of Legislative Audit found that hundreds of thousands of dollars in the program were misused.

Tammie Cloyes voluntarily surrendered her license, which the Education Board voted to accept. But fourth grade teacher Davissa Brimer pleaded with the board not to suspend her license. A suspension would prevent her from continuing a 26-year teaching career during which she has become certified by the National Board of Professional Teaching Standards.

Fighting back sobs, Brimer told the board that her role in the after-school program was to interact with the children and that while she should have asked questions about the finances and purchases, she didn't.

"I trusted others," Brimer said. "I trusted that our budgets were right."

Board member Chad Pekron of Bryant made the motion to revise the proposed three-year suspended license and $500 fine to three years of probation and a $250 fine for Brimer, during which time she can continue to teach but have no financial responsibilities. The board voted 5-1 in favor with board member Ouida Newton of Leola voting against the change.

Pekron made the motion after questioning the process for making disciplinary recommendations for teachers who are found to violate the state's teacher standards for ethical behavior. He noted that Pennington was recommended for probation for a violation that "blew up" the town of Dumas while a more severe suspension of an apparently good teacher was initially recommended for Brimer. He said the disparate recommendations are hard to explain and create mistrust in the process.

Taylor Dugan, an attorney for the Arkansas Division of Elementary and Secondary Education, explained that the disciplinary hearings that are conducted by volunteer panels of educators are in-depth, but also very tough and dependent upon the witnesses. In some cases the potential witnesses are students who do not want to participate in the hearings and are not subpoenaed. That affects the strength of the case and the ultimate penalty recommendation, Dugan said.

Print Headline: Decision on penalty for hateful text is shelved