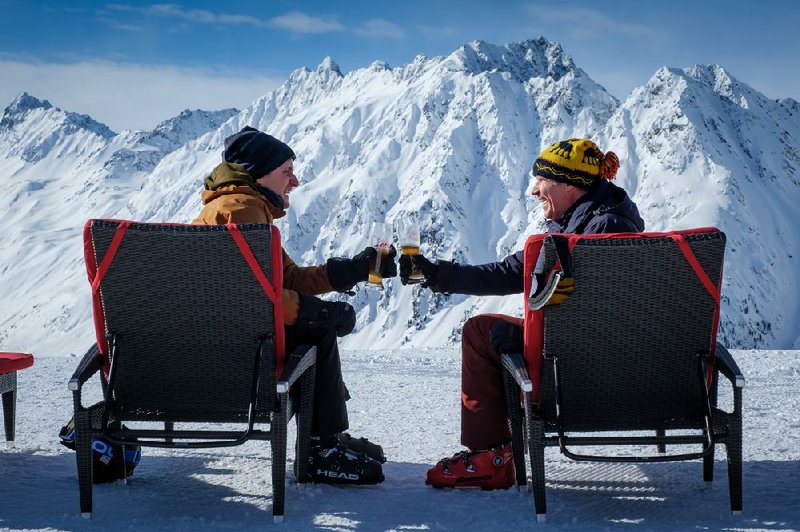 Zach (Zach Woods) and Pete (Will Ferrell) are competitive friends and co-workers in Downhill, a movie about the fragility of the male ego.

There practically wasn't a film critic alive who didn't see the announcement of an American remake of the brilliant 2014 Swedish film Force Majeure and blanch a little. That's not just cinephile snobbery: That film's enigmatic director, Ruben Östlund, whose next film, The Square, won the 2017 Palme d'Or at Cannes, is a master of intricate -- and devilish -- tone control. His films play like serious dramas, but with a deeply submerged core of black comedy in their center, like the darkest, most bitter chocolate wrapped around specks of sweet caramel. He is particularly fond of scenes that have dramatic and comedic elements in their froth, swirling around together so it's difficult to separate them. Needless to say, this is not the formula for American studio films with big-name casts, whose default mode is pointedly unlayered, spelling out the emotional beats so there can be no scratched-out criticism or confusion on the focus-group cards.

Given the potential for a complete disaster, I will say from the outset that the film steers clear of the worst possibilities for itself -- becoming a big, dumb comedy vehicle for one of Will Farrell's pompous doofus characters. Nat Faxon and Jim Rash's film never reaches the intricate emotional levels of the original, but there's still enough here to justify its creation.

Rating: R, for language and some sexual material

That's not to say there isn't a lot lost in translation, and we can start with the hotel. Both films are set in the Alps -- though Östlund's film is set in France, and the remake settles for Austria -- but whereas the original film's setting is a ski lodge up high in the mountains so compellingly gorgeous as to feel utterly unreachable by normal human beings (all the better to stage a dark comedy in which a carefully constructed social facade gets demolished), the remake is set in a standard, more gauche, ski village, with blazing, garish bars, and swarms of family skiers taking their big vacation plunge for the year.

As far as main plot points go, the remake retains the gist: Billie (Julia Louis-Dreyfus) and Pete (Will Farrell) are a married couple with a pair of sons on a European ski vacation. Seemingly happy, and obviously well off, they appear to have an enviable sort of life, but when a controlled avalanche gets a little too close to the outdoor rooftop cafe where they are enjoying breakfast, a pretty deep fissure is exposed: Instead of rushing to protect his family from the impending calamity, Pete instead grabs his phone and hightails it away from the table, leaving his family to fend for themselves. As can be expected, her husband's gutlessness leaves Billie furious with him and Pete stammering out excuses as to why his instinct was so self-preserving.

In terms of the basic conflict between the couple, the new film follows the lead of its predecessor, but the devil, as they say, is in the details, where the films differ in significant ways. In Majeure, the husband is young, rich, handsome and sleek, like his wife and their kids -- such an obstacle as his own craven cowardice is unthinkable to him, so he denies his wife's account and instead insists she is mistaken in her interpretation of events. Again, because of Östlund's more nuanced inclinations, the husband's desertion is at least slightly less obvious, making the argument with his wife more credible, at least on the surface. We know he left everyone in a surge of panic, but it's unclear if he even allows himself to recognize that reality.

With Ferrell, playing a character from his root ensemble -- pomposity backed by a misty ego of steam particles -- it's very clear from the beginning Pete knows how badly he has revealed himself. He weakly attempts to defray Billie's anger but is never able to make much of a case for himself, especially in front of a visiting younger co-worker (Zach Woods) and his cool girlfriend (Zoe Chao), whom he desperately wants to impress.

Instead of picking at the delicate tendrils of the human ego, Faxon and Rash go in a different sort of direction, focusing less on the husband's inability to actually see himself than on his wife's unbridled disappointment and fury at him. In this, Louis-Dreyfus is up to the task. Billie is furious, but it stems from the very real experience she had in which she was certain that she and her two sons were about to die. Played not for laughs but pathos, the scene in which she describes that moment of overwhelming grief and panic that their lives were about to end powers the film in an entirely different way from Majeure.

Unfortunately, to make up for the lack of further emotional layers between them, Faxon and Rash tack on side stories with both characters, giving Billie a chance for discreet revenge and Pete further humiliation that serve to muddy the moral waters between them further. This takes us to the end, in which Billie's cold fury gets replaced by steely pragmatism (an apt analogy for a lot of marriage contretemps, I should think), which leaves them in an unhappy place, but not necessarily a fatal one.

It has to be noted, as much as the film pales in comparison to its source material, it still could have been a lot worse (faint praise is still praise). Ferrell, who could have played a much more broad and idiotic version of this character in his sleep, actually keeps himself reined in, avoiding turning Pete into simple comic caricature ("I drive a Dodge Stratus!"), and the aforementioned Louis-Dreyfus virtually saves the whole damn thing with her performance. As such, it doesn't make such a bad experience on its own, but like comparing a DiGiorno frozen pizza to a hot pie fresh out of the oven at Frank Pepe's, it's only good if you don't realize what it's trying to emulate. 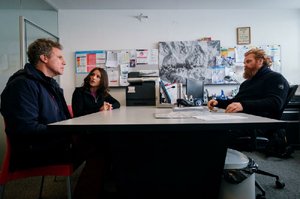 Married couple Pete (Will Ferrell, left), and Billie (Julia Louis-Dreyfus) meet with ski patrol supervisor Michel (Kristofer Hivju) in Downhill, a remake of the 2014 Swedish film Force Majeure in which Hivju had a different role. 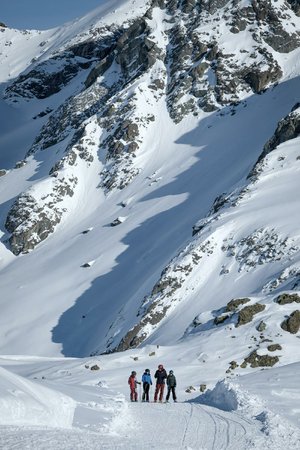 Before the deluge — Pete (Will Ferrell), and Billie (Julia Louis-Dreyfus) take their sons on a European vacation in the Alps in Downhill.